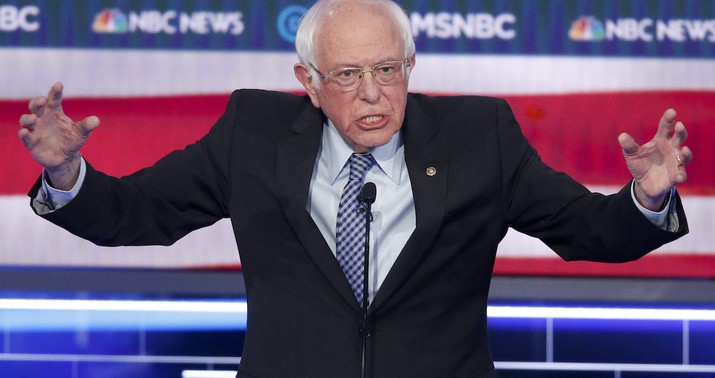 I haven’t quite written 16 other posts about this topic but I have written quite a few in the past several weeks and I’m not the only one writing them.  If I were curating an anthology of such pieces I would title it ‘Scenes from an Electoral Train Wreck.’ Personally, I’ll never get tired of this particular sub-genre. But there’s a very good reason every major news outlet has written some version of this story at least once: Democrats are well and truly terrified. And as Vox pointed out recently, it’s not an irrational fear but a very rational one. So let’s savor the heady brew of Democrats’ incipient panic once more, shall we? This particular piece focuses on Sanders’ potential impact in South Carolina:

In conversations with down-ballot Democratic candidates and strategists here, many said they were crossing their fingers in hope that Sanders’ momentum would come to a halt in South Carolina’s primary this weekend.

“It is certainly a conversation that is happening regularly among Democrats. It’s to the point that I think it’s influencing who some folks will vote for on Saturday,” said Brady Quirk-Garvan, the former chairman of the Charleston County Democratic Party. “There is a deep concern about what a Sanders nomination would mean not just for congressional districts, but down-ballot.”

Richard Hricik, a Charleston-based lawyer running to unseat a Republican state senator, said: “I am not going to even speculate about a Bernie Sanders win.” Hricik is a supporter of former Vice President Joe Biden.

Antjuan Seawright, a South Carolina Democratic strategist, said “there’s always a concern when you’re from the South” when asked how democratic socialism would play out in state and local races here. “And there’s always the concern that people will try and over-intensify whatever messages will come from the top and try and pinpoint it to the bottom.”…

“The surest way to flip those seats back to red is for Sanders to be at the top of the ticket,” a freshman Democratic lawmaker said in a telephone interview.

Rep. Joe Cunningham, who is one of the moderate House freshmen Democrats are worried about losing, has already tried to distance himself from Sanders. Two weeks ago he told the Post and Courier, “South Carolinians don’t want socialism.” Asked if he’d support Sanders if he became the nominee, Cunningham replied, “Bernie Sanders will not be the nominee.”

The panic is certainly enjoyable but as I pointed out here, it doesn’t necessarily guarantee Democrats will lose the House if Sanders is the nominee. The fact is that a lot of politics is still local and voters can split their tickets, choosing not to vote for Sanders for President and still voting for a more moderate Democrat they like in their own district.

What we can say with some certainty at this point is that having Sanders as the nominee increases the likelihood that Democrats will lose seats in the House. Because unless there is a surge of young socialists at the polls greater than the surge of black voters who supported Barack Obama in 2008 (a very high bar), Sanders is going down like a boat anchor. Wiser heads in the party keep warning and warning this is going to happen but the 25-year-old Sandernistas aren’t listening.