Report: Trump offered Assange pardon if he would deny Russia hacked DNC emails (Update: Rohrabacher ‘at no time did I talk to President Trump’) 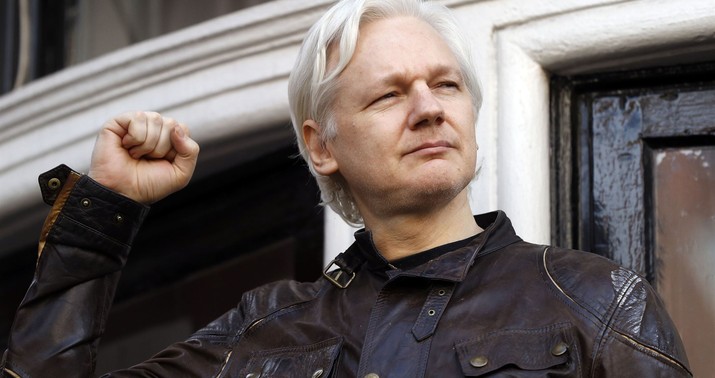 The Guardian is reporting that lawyers for Julian Assange claim President Trump made an offer to pardon Julian Assange if he would agree to deny that Russia had hacked the DNC’s emails.

The extraordinary claim was made at Westminster magistrates court before the opening next week of Assange’s legal battle to block attempts to extradite him to the US.

Assange’s barrister, Edward Fitzgerald QC, referred to evidence alleging that the former US Republican congressman Dana Rohrabacher had been to see Assange, now 48, while he was still in the Ecuadorian embassy in August 2017.

A statement from Assange’s lawyer Jennifer Robinson shows “Mr Rohrabacher going to see Mr Assange and saying, on instructions from the president, he was offering a pardon or some other way out, if Mr Assange … said Russia had nothing to do with the DNC leaks”, Fitzgerald told Westminster magistrates court.

You won’t be shocked to learn that some voices on the left are very excited about this charge.

BREAKING: "Trump offered to pardon Julian Assange if he agreed to cover up the involvement of Russia in hacking emails from the DNC, which were later published by WikiLeaks, a London court was told." via Daily Beast. Confirming what we already knew. Trump colluded with Russia.

Today’s revelation of Trump’s bribe of Assange is further evidence of what we all know to be true: Trump colluded with Russia to steal the 2016 election. He’s trying to do it again. That’s what Criminals do.

I think the appeal of this story for the left is obvious. First, I think it’s fair to say that Trump really has spent a lot of time downplaying the idea that Russia was behind the DNC hack so it’s at least somewhat believable that he would want Assange to back him up. Also it dovetails with the impeachment charges brought against Trump and it’s timely after the pardons and commutations Trump issued yesterday. Raw Story is already quoting some Twitter rando calling for a 2nd impeachment.

But I’d like to offer several reasons to take a deep breath on this claim. Let’s start with the fact that a very different version of this story has already been told back in 2017. Back then, Allahpundit wrote about a Wall Street Journal piece which claimed it was Dana Rohrabacher who had contacted the White House to propose a deal in which Assange would get some kind of pardon in exchange for proof that Russia was not behind the DNC hack:

A U.S. congressman contacted the White House this week trying to broker a deal that would end WikiLeaks founder Julian Assange’s U.S. legal troubles in exchange for what he described as evidence that Russia wasn’t the source of hacked emails published by the antisecrecy website during the 2016 presidential campaign…

“He would get nothing, obviously, if what he gave us was not proof,” Mr. Rohrabacher said…

Rohrabacher confirms here he met with Assange Aug 2017 and was in touch with White House: "I've talked to senior people at the White House … I had extended conversation with the Chief of Staff Gen Kelly." Says deal with Assange between him and WH is confidential. What deal? pic.twitter.com/S05iCzAuSv

And that brings me to reason number two why I’m skeptical of this new report: Julian Assange has long denied Russia was behind the hacked material that Wikileaks helped release. Here’s Rohrabacher’s statement about his 2017 meeting with Assange.

Huge if true, but interesting because it doesn't seem like Assange would need incentivizing to say this–he's long claimed (falsely, according to the US IC) that Russia was not WikiLeaks' source for the hacked documents. https://t.co/u2lx9sVLMn

And that brings me to reason three I have doubts about this story: Assange was so committed to his denial of Russia as the source of the DNC emails that he helped pump up the bogus Seth Rich conspiracy theory. Assange did this after contacting two Russian fronts (DC Leaks and Guccifer 2.0) to coordinate the release of information. Despite this, Wikileaks offered a $20,000 reward in connection to the murder of Seth Rich months later.

ANNOUNCE: WikiLeaks has decided to issue a US$20k reward for information leading to conviction for the murder of DNC staffer Seth Rich.

Assange famously went on television in August 2016 to stoke this conspiracy:

Host: The stuff that you’re sitting on, is an October surprise in there?

Julian Assange: WikiLeaks never sits on material. Our whistle-blowers go to significant efforts to get us material and often very significant risks. There’s a 27-year-old, uh, works for the DNC who was shot in the back, murdered, just a few weeks ago, for unknown reasons as he was walking down the streets in Washington.

Host: That was just a robbery I believe, wasn’t it?

Assange: No. There’s no finding.

Assange: I am suggesting that our sources take risks and they are…they become concerned to see things occurring like that.

Host: But was he one of your sources then? I mean…

Assange: We don’t comment on who are sources are.

Host: But why make the suggestion about a young guy being shot in the streets of Washington?

Assange: Because we have to understand how high the stakes are in the United States and that our sources are…our sources face serious risks, that’s why they come to us so we can protect their anonymity.

Host: But it’s quite something to suggest a murder, that’s basically what you’re doing.

Assange: Well, others have suggested that. We are investigating to understand what happened in that situation with Seth Rich. I think it is, uh, a concerning situation. There’s not a conclusion yet. We wouldn’t be willing to state a conclusion but we are concerned about it. More importantly, a variety of WikiLeaks sources are concerned when that kind of thing happens.

Who else was pushing the Seth Rich conspiracy theory at the time? Russia, and for the same reason:

#WikiLeaks informer Seth Rich murdered in US but 🇬🇧 MSM was so busy accusing Russian hackers to take notice. pic.twitter.com/0XVezTyfHM

The White House has already denied the claim made in the Guardian story:

The president barely knows Dana Rohrabacher other than he’s an ex-congressman. He’s never spoken to him on this subject or almost any subject,” White House Press Secretary Stephanie Grisham, who is traveling with Mr Trump on a West Coast campaigning tour, said in an email.

“It is a complete fabrication and a total lie,” she said of Mr Fitzgerald’s allegation. “This is probably another never ending hoax and total lie from the DNC.”

Julian Assange has an extradition hearing starting next Monday. If he is extradited to America and convicted of espionage, he could wind up spending decades in prison. I believe he’d say just about anything to avoid that, in the same way he spent years in the Ecuadorian Embassy to avoid facing rape charges in Sweden. In short, he has all the motive in the world to lie, especially if that lie implicates the country seeking his extradition in shady dealings.

But when it comes to this particular topic, i.e. who hacked the DNC’s emails, Assange has already lied extensively about that so his word shouldn’t be trusted. Add to that the fact that a very different version of this story was published two years ago and this doesn’t seem terribly solid. I suppose we’ll have to wait to hear what Rohrabacher has to say. In any case, I’m sure we’ll spend several weeks discussing it because there’s an established market for a story like this whether or not the source is credible.

Update: So here’s Dana Rohrabacher’s statement on this and it matches with what I suggested above, i.e. he says he never spoke to Trump at all much less acted as Trump’s emissary.

There is a lot of misinformation floating out there regarding my meeting with Julian Assange so let me provide some clarity on the matter:

At no time did I talk to President Trump about Julian Assange. Likewise, I was not directed by Trump or anyone else connected with him to meet with Julian Assange. I was on my own fact finding mission at personal expense to find out information I thought was important to our country. I was shocked to find out that no other member of Congress had taken the time in their official or unofficial capacity to interview Julian Assange. At no time did I offer Julian Assange anything from the President because I had not spoken with the President about this issue at all. However, when speaking with Julian Assange, I told him that if he could provide me information and evidence about who actually gave him the DNC emails, I would then call on President Trump to pardon him. At no time did I offer a deal made by the President, nor did I say I was representing the President. Upon my return, I spoke briefly with Gen. Kelly. I told him that Julian Assange would provide information about the purloined DNC emails in exchange for a pardon. No one followed up with me including Gen. Kelly and that was the last discussion I had on this subject with anyone representing Trump or in his Administration.

Even though I wasn’t successful in getting this message through to the President I still call on him to pardon Julian Assange, who is the true whistleblower of our time. Finally, we are all holding our breath waiting for an honest investigation into the murder of Seth Rich.

The Seth Rich things is pretty pathetic at this point but the bulk of this seems like a solid denial of the main thrust of the Guardian story. The fact that all of this was reported more than two years ago in the same way strongly suggests Julian Assange is lying…again.