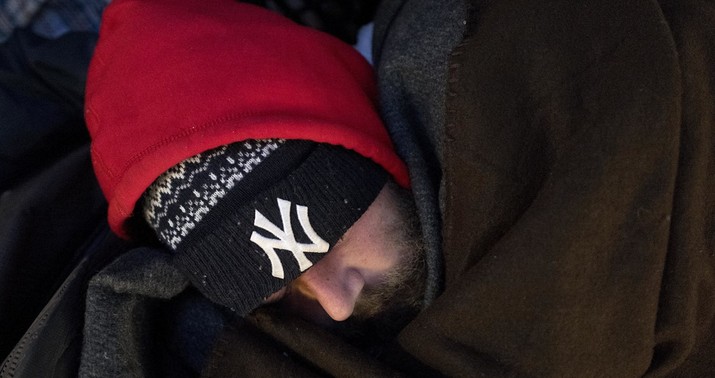 In October 2018, a NY homeless man named Joseph Matos set up a series of cardboard boxes in front of a hair salon and went to sleep. A couple of college students, Jorge Morales and Jose Bosch, walked past the spot while looking for a pizza place. Morales was celebrating his 21st birthday and had been drinking a lot that night. He saw the boxes and kicked them, thinking they were trash.

Matos, who is 57 years-old, came out from under the boxes with a knife and went after the two students, stabbing one in the back and slashing the other in the face. He’s now facing up to 22 years in prison if he is convicted. Matos was offered a plea deal but refused it. He and his attorneys are now claiming that the case against him should be dismissed entirely on the grounds that he was defending his home:

Under New York’s “castle doctrine,” a person has a right to protect his home with deadly force if he reasonably believes another person is entering without permission and is seeking to commit a crime. The defense hinges partly on whether a collection of cardboard boxes is a home…

The Manhattan district attorney’s office declined to comment but said in court papers that Mr. Matos had vengeance, not safety, on his mind when he confronted the students.

Prosecutors said Mr. Matos was the instigator, chasing after the young men, stabbing one of them in his shoulder and back, lacerating his liver, and slashing the other above the eye…

If the case goes to trial, Mr. Matos’s lawyer could request jury instructions from the judge to address whether Mr. Matos was obligated to retreat or whether he could stand his ground reasonably believing he was in his home and did not have to run from it, said Carl Bornstein, a former state and federal prosecutor who teaches at John Jay College of Criminal Justice.

Matos tells a different story about what happened. He claims that after he exited his boxes, the two students returned and confronted him and that one of them brushed past him in a dismissive way. There was a security camera nearby which showed Matos leaving the box but not the confrontation that followed.

So does Matos have a chance of succeeding here? I’m tempted to say no because this claim seems pretty ridiculous on its face. Matos was on public property, immediately adjacent to private property he didn’t own. The only thing he owned in this scenario were the boxes. I don’t see how you can claim boxes are a home in the first place, but even if you somehow decide they are functionally a home, the two students walking by on the sidewalk didn’t know Matos was inside.

And even if you take it a step further and assume they did know Matos was inside, the attack happened outside the boxes on the public sidewalk. Castle doctrine applies to threats happening inside your home, not outside of it. It’s one thing to respond with force against an intruder who climbed through your bedroom window, but if someone kicks your front door, you can’t run out into the street and stab them for it.

Finally, I would think a court would be very hesitant to send the message that a homeless person who decides some piece of public property (a park, a sidewalk, an underpass) is his own has the legal right to defend it with violent force from everyone who intrudes. That seems like an invitation to chaos.

Dems about to retreat back into their urban bubble?

“We’d be in a new depression”

“Everyone will move over after South Carolina”: Biden fundraisers starting to ditch him for Bloomberg?

Study: Most journalists are to the left of Bernie Sanders (but don’t worry they’re totally fair)

“…a full 14.5% are more liberal than Alexandria Ocasio-Cortez”

Have doorbell cameras turned us into “a nation of voyeurs?”

And do they even help keep you safe?

“They had no immediate information on a motive for the shooting…”