Uh-oh! Time to cancel Stephen King after he suggests art should be judged on quality, not diversity 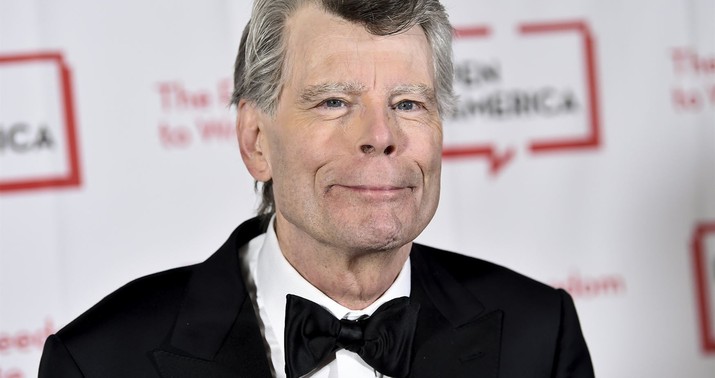 Author Stephen King is a member of the resistance in good standing:

Truth is to Trump what kryptonite is to Superman.

But some of his progressive fans were shaken today when King suggested that “diversity” shouldn’t play a role in “matters of art” only the quality of the work:

As a writer, I am allowed to nominate in just 3 categories: Best Picture, Best Adapted Screenplay, and Best Original Screenplay. For me, the diversity issue–as it applies to individual actors and directors, anyway–did not come up. That said…

…I would never consider diversity in matters of art. Only quality. It seems to me that to do otherwise would be wrong.

As you can see, that statement was liked more than 32,000 times, but it also brought a strong reaction from thousands of people who felt that King was speaking from privilege:

With all due respect, I'm afraid that a meritocracy could work only if the game weren't rigged.

With the utmost respect, I think this is quite a bit unfair. When films created by people of color, irrespective of quality, constantly get overlooked by institutions that are predominately comprised of white men, there is an implicit bias at work here.

Sir, respectfully saying you as a white man can’t really say that. You had more advantages and opportunities than a person of color would have. They have been wrongfully held back in so many ways just because of their color skin.

As a fan, this is painful to read from you. It implies that diversity and quality cannot be synonymous. They are not separate things. Quality is everywhere but most industries only believe in quality from one demographic. And now, here you are.

Damn, Stephen. Damn. I thought you were better than this. It should be obvious that diversity and quality *aren't separate qualities,* or in opposition to each other — except in the minds of bigots.

When you wake up, meditate, stretch, reach for your phone to check on the world and see a tweet from someone you admire that is so backward and ignorant you want to go back to bed. https://t.co/nPXOeAebkb

A couple of hours after his initial tweets, King offered a clarification:

The most important thing we can do as artists and creative people is make sure everyone has the same fair shot, regardless of sex, color, or orientation. Right now such people are badly under-represented, and not only in the arts.

You can't win awards if you're shut out of the game.

That wasn’t good enough for Jemisin:

I don't think it's a nice save at all. He's still treating diversity as "that feel-good thing privileged people maybe do on the side" but extraneous to writing quality characters or worlds. It's horseshit.

When Roxanne Gay writes that King’s statement “implies that diversity and quality cannot be synonymous” I think I get what she’s saying. There are plenty of talented people of every race so there’s no reason you can’t have both diversity and quality. Fair enough. But I don’t think King was saying they can’t be synonymous only that a judgment of quality shouldn’t involve any judgment of race.

Let’s not forget the context here. The Oscars are judging the cream of the crop and once again this year the awards (and the Oscar voters) are being accused of not nominating enough people of color. The suggestion being made is that the largely white Oscar voters are too biased (perhaps unconsciously) to be fair. And in response to this accusation which is making the rounds on social media, King is saying that he tries to judge the quality of work, not the diversity of the creator. In other words, he’s not giving anyone a bonus in his estimation because they are a minority, just as he wouldn’t give anyone points for being part of the white majority.

I think it’s fair to say, as King does, that it’s important to try to ensure a level playing field which certainly hasn’t always existed for people of color in Hollywood and elsewhere. However, as a voter at the Oscars this year what is King supposed to do about this? Is he supposed to judge what’s presented to him on quality alone or is he supposed to favor someone based on their perceived opportunities?

As a judge, King still needs to look at what’s out there fairly. Self-conscious bias for one group is no improvement on unconscious bias for another. Equal opportunity is important but making that a reality can’t all be placed at the feet of Oscar voters. So as much as I don’t enjoy Stephen King’s political commentary what he said about judging quality apart from diversity isn’t backwards.

No, There Is No Gun Show Loophole Per DOJ Study

“[S]taff members described a ‘whitewashing’ of the situation, characterizing the response as ‘corrupt’ and a ‘cover-up’…”

“…and the outer limit of the politics of polarization.”