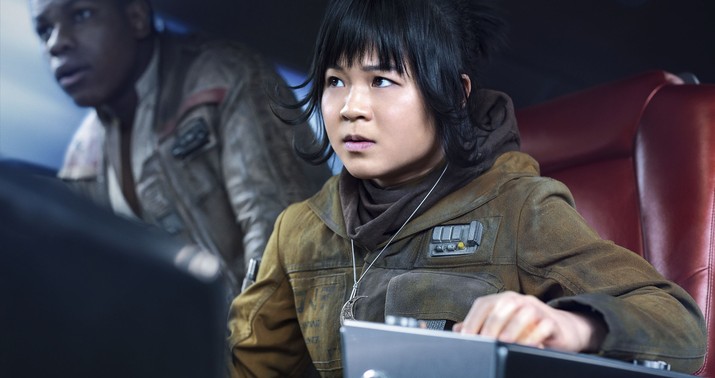 Just when I thought I was out, they pull me back in.

As I said last month, I wasn’t really interested in seeing Rise of Skywalker and I haven’t. I assumed it would be bad and that it would make a lot of money anyway. I wasn’t quite prepared for the new round of stupidity from progressive reviewers upset about the movie. Much of the focus has been on the fact that JJ Abrams reduced the role of the useless Rose Tico character to a footnote. I’ve seen a lot of this floating around and Thursday Slate published an outraged piece demanding someone justify the decision to sideline the character:

Kelly Marie Tran has one minute and 16 seconds of screen time as Rose Tico in Star Wars: The Rise of Skywalker, and no one has yet produced a convincing explanation for why that’s the case…

Demoting Rose from major character to bit player is not just bad for Tran, who was the first woman of color to play a leading role in a Star Wars movie, as she herself has pointed out. It’s also bad for The Rise of Skywalker and the trilogy as a whole. Rose’s romance with Finn has apparently been forgotten, just one of many loose ends that The Rise of Skywalker, supposedly the final installment in a nine-episode saga, never bothers to tie up. And the already-bloated movie brings in several new supporting players whose lines or actions could’ve instead been given to the existing character. Even Jar Jar Binks, another much-loathed Star Wars character, had more to do in Attack of the Clones than Rose does in The Rise of the Skywalker…

After The Last Jedi,Tran was harassed by disgruntled fans and subjected to racist and sexist insults, information that could hardly have escaped their notice: She wrote an op-ed in the New York Times about it, after all. Cutting Rose out of the story, regardless of the reasoning, gives those people exactly what they wanted.

The director of Crazy Rich Asians is openly begging Disney to let him make an entire show based on the character:

Rian Johnson said she was meant to be a nerd but she actually turns out to be a kind of hippie/social justice warrior in a movie called Star Wars. For instance, the only point of the otherwise pointless diversion to the Vegas planet is to introduce an Occupy perspective into the story (we are the 99 percent) and also to show us that Rose Tico is an animal rights campaigner. That’s her big moment up until the final one which is probably the worst moment in any Star Wars film to date, right up there with Jar Jar.

Finn is trying to save the remaining members of the resistance by sacrificing himself. But Rose stops him. After crashing into his ship, Rose explains that the real secret of beating the First Order isn’t killing those you hate but saving those you love. It’s the Star Wars equivalent of ‘Make love, not war.” But it’s particularly stupid because Finn was actually trying to save the remaining resistance fighters who were about to be killed by the First Order. The only reason everyone doesn’t die as a result of Rose’s actions is that Luke Skywalker astral projects himself to the scene to save the day. He winds up dying from the effort, which is exactly the sort of sacrifice Rose prevented Finn from making. It makes no sense.

And let’s not forget that earlier in the movie another character makes a sacrificial move to blow up the First Order’s flagship. So the movie is saying one thing (sacrifice for others is necessary and inevitable in a war) but the Rose character is undercutting all of that in a weird way that makes it seem like she’s acting out of her personal interest. The awkward kiss she gives Finn only seems to emphasize this. She clearly has a thing for him and that’s why she didn’t want him to die. Finn was trying to do something noble and she was daydreaming about a boyfriend.

Bottom line: Rose Tico was dreamed up as a character who didn’t belong in a Star Wars movie and that’s exactly what she became. But the progressives who write most of he movie reviews don’t care about that because a) Rose was played by an Asian actress and b) Rose was a social justice warrior in the film. Instead of admitting that she just didn’t make sense in this movie the progressives have decided it’s the fans who don’t belong in the theaters. Indeed, there’s another “toxic fandom” piece at Comic Book Resources this week titled “Star Wars: It’s Time to Accept the REAL Problem Is the Fans.”

Fans lash out, not because the movies didn’t suit their personal tastes, but because they offend their sense of identity. From review-bombing to outright hate speech, the negativity swirling around Star Wars isn’t coming from objectively bad filmmaking, it’s coming from the fans themselves.

This is wrong and stupid but you can’t swing a dead cat on the internet without hitting someone who is firmly convinced it’s true. I think JJ Abrams summed up the problem with Rian Johnson’s The Last Jedi recently when he said, “it’s a bit of a meta approach to the story. I don’t think that people go to ‘Star Wars’ to be told, ‘This doesn’t matter.’” That’s correct. If you take a beloved property and extend it with characters whose purpose is to tell the fans they were wrong to care in the first place, you’re going to piss a lot of people off. Rose Tico was, unfortunately for actress Kelly Marie Tran, one of the characters who most embodied that attempt to turn Star Wars into something alien to itself. Though to be fair, anti-Jedi Luke isn’t much better.

Finally, because I want to end on a constructive note, I came across this video discussing how Rose Tico might have been made into a much better character and perhaps made TLJ a much better movie in the process. It’s pretty long but the short version is: Make Rose the hacker and cut out all the garbage with the characters looking for a hacker. That would have kept the main characters on the ship and preserved the tension and unity of action, etc. I’m not saying this is the only solution or the best solution but I think this does show that even random people on the internet can come up with a better idea of how to make a decent Star Wars movie that Rian Johnson. He was a disaster for the sequels and JJ Abrams could only attempt to undo the mess he created, including by jettisoning Rose Tico, the character who never belonged.