McCabe apologized to FBI agents after changing his story on leak 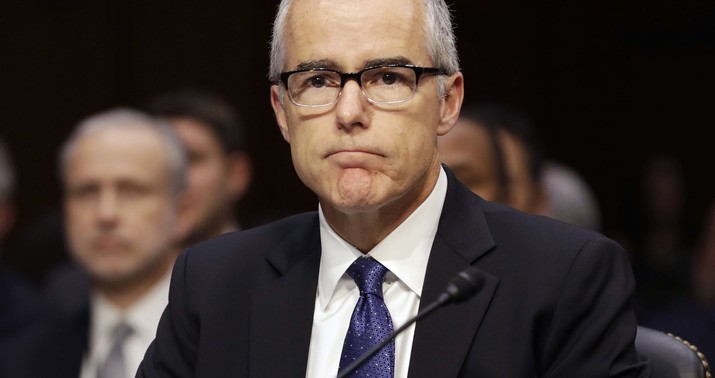 Last April I wrote about the IG report which concluded that Andrew McCabe had lacked candor in several instances involving a leak to the media. IG Horowitz concluded that McCabe not only told a misleading story to his then-boss James Comey, he also misled FBI investigators who were questioning him under oath. This week, the FBI released some of the documents connected to the questioning of McCabe in response to an FOIA request from Citizens for Responsibility and Ethics in Washington (CREW). Those documents reveal that after sending agents looking into the leak on a wild goose chase, McCabe eventually reversed course and apologized.

In an initial interview on May 9, 2017, McCabe told agents that he had no idea who had leaked information to a reporter at the Wall Street Journal. Agents then spent months trying to track down who was responsible. Eventually, they came back to McCabe in August and pressed him on his involvement:

McCabe then looked at the story he had reviewed months earlier.

The FBI investigator described his response this way: “And as nice as could be, he said, yep. Yep I did.”

The investigator then said that “things had suddenly changed 180 degrees with this.” The interviewers stopped taking notes on what McCabe was saying, and the agent indicated their view of McCabe had changed: He was no longer a witness or victim. “In our business, we stop and say, look, now we’re getting into an area for due process,” the agent said…

“I remember saying to him, at, I said, sir, you understand that we’ve put a lot of work into this based on what you told us,” the agent said. “I mean, and I even said, long nights and weekends working on this, trying to find out who amongst your ranks of trusted people would, would do something like that. And he kind of just looked down, kind of nodded, and said yeah I’m sorry.”

Again, this belated admission was 180 degrees from what McCabe had told investigators when first asked. Three days after the May 9, 2017 meeting with agents, they sent McCabe a Signed Sworn Statement which he was to review, sign and return. Here’s what the statement said about the May 9 meeting:

On 05/09/2017, [INSD-Section Chief] and [INSD-SSA1] provided me with a photocopy of a Wall Street Journal article, dated 10/30/2016, and requested I evaluate and assess the content of the first three paragraphs appearing on the last page for accuracy. My assessment of the referenced portion of the article is that it is basically an accurate depiction of an actual telephonic interaction I had with a Department of Justice (DOJ) executive. I do not know the identity of the source of the information contained in the article. Since this event, I have shared the circumstances of this interaction with numerous FBI senior executives and other FBI personnel. I gave no one authority to share any information relative to my interaction with the DOJ executive with any member of the media. I initialed a photocopy of the article, which is attached to my statement as Exhibit Number 5.

But McCabe’s behavior in relation to the sworn statement was itself suspicious. The IG report notes that McCabe never signed or returned the statement even after it was sent to him multiple times:

As of approximately 1 month later, McCabe had failed to execute and return the draft SSS. Accordingly, on June 23, INSD again e-mailed it to him and again requested that he review and sign it. However, INSD accidentally sent it to a different FBI employee rather than to then-Acting Director Andrew G. McCabe. The unintended recipient forwarded the INSD e-mail to then-Acting Director McCabe. That same date, McCabe e-mailed INSD to note the error in the address. McCabe did not sign the draft SSS and did not communicate with INSD regarding the draft SSS until August 18, as described below.

During the August 18th meeting in which he changed his story, McCabe claimed he hadn’t signed or responded to the sworn statement for three months because he realized it was wrong about his non-involvement.

Later, in November, when McCabe was questioned under oath with his lawyer present, he claimed that the agents who interviewed him on May 9 must have gotten it wrong because he’d never claimed he wasn’t responsible for the leak:

McCabe’s account of this May 9 interview, which he provided to the OIG during his November 29 interview, was wholly unpersuasive. McCabe claimed that the INSD agents “must have” gotten it wrong when they wrote that he told them on May 9 that he did not authorize the conversation and that he did not know who the source was. Although McCabe said he did not believe that he denied authorizing the disclosure of the PADAG call during the interview, he could not provide any alternative account about what he actually said. Rather, McCabe stated that he could not remember what he told the INSD investigators. McCabe did not question the competence or good faith of the INSD interviewers, and also admitted that he could not explain why the investigators got the impression that McCabe had told them the WSJ article was an unauthorized leak.

However, in an apparent effort to provide an excuse for his untruthful responses to INSD, McCabe sought to portray the discussion about the October 30 article as essentially an afterthought by the agents. We found his description of the circumstances surrounding the interview to be demonstrably false.

In short, he lied about the leak, tried to avoid responsibility when asked to sign a sworn statement about his lie, later admitted he was the leaker, and finally denied having misled the agents in the first place even as he continued to lie about the circumstances surrounding their questions. All of this is why McCabe deserved to be fired. He could still face charges for lying to the FBI though that seems less likely as time passes.

The internet is forever.

“…to protest the dairy industry’s abuse of female bodies.”

If Duterte Wants Us Out, Let's Go

B.S. ALERT: Obama Tries to Take Credit for Trump's Economy With His 'Recovery Act'—and It's an Epic Fail

DVD review: Knives Out kills it — in two different ways

Now the nuclear family is insufficient?

It takes a village idiot

CNN host: Was it perhaps stupid of me to take Avenatti’s presidential chances seriously?

“So, give me a media critique. Was that stupid on my part?”

Steyer: People can’t be trusted to judge their own economic situation, or something

Brace yourselves. Weinstein could wind up walking

Not a laughing matter

“Is the real problem that Bernie Sanders will lose or that he might win.”

Stacey Abrams: Of course I want to be vice president

Five days to go: Nevada Dems still worried that caucus night will be another Iowa-style debacle

“It feels like the [state party is] making it up as they go along.”