House Dems: We may go back for seconds on impeachment 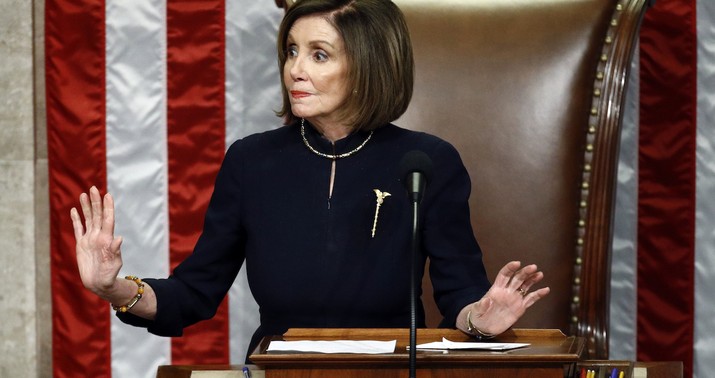 The House has already decided to hold off on delivering the articles of impeachment to the Senate in an attempt to drag out the process. Now the AP reports Democrats are threatening to add more articles and, presumably, have another vote to approve them. At issue is the testimony of former White House Counsel Don McGahn:

A judge last month directed McGahn to comply with the House Judiciary Committee subpoena, and a Washington-based appeals court is scheduled to hear arguments Jan. 3.

In a court filing Monday, lawyers for the committee said McGahn’s testimony remains essential even though the House has already voted to impeach Trump on two charges related to his interactions with Ukraine rather than on actions uncovered during Mueller’s Russia probe.

“If McGahn’s testimony produces new evidence supporting the conclusion that President Trump committed impeachable offenses that are not covered by the Articles approved by the House, the Committee will proceed accordingly — including, if necessary, by considering whether to recommend new articles of impeachment,” lawyers for the Democratic-led committee wrote.

I don’t think this latest maneuver is going to convince a lot of people that Democrats are taking this seriously. On the contrary, the possibility that Dems could hold another impeachment vote just weeks after the first one makes this look like even more of a clown show than it already did.

I suspect this is all about controlling the narrative in the media, or at least trying to do so. Remember, Democrats said they were in a big hurry to impeach Trump but recent polls show support for impeachment has dropped and Trump’s approval has gone up. I guess Dems figured the only thing that could make it worse was having the entire exercise dismissed by the Senate in a matter of hours. So Democrats decided it was best to drag this out like a dramatic cliffhanger at the end of a season of television.

But dragging this out doesn’t make much sense if the polling is working against you. So now they’ve come up with an excuse, i.e. we’re dragging this out because we might not be done. That’s admittedly a better cliffhanger for the impeachment show and one the far left will support. Too bad it took them until the day before Christmas Even to come up with it. By now most normal people are getting together with family and celebrating the holidays. They are not worrying about this.

Democrats are hoping for a Christmas miracle or maybe a recession but neither one seems likely to arrive anytime soon. So we’re left with the pathetic spectacle of Dems threatening more of the same and hoping this time it works out differently.