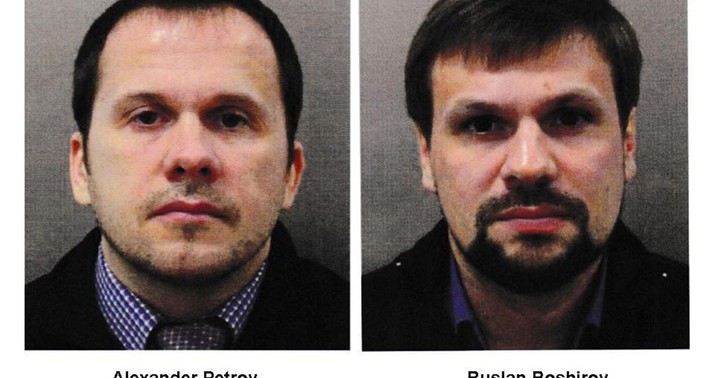 You probably recall the nerve agent attack on former Russian spy Sergei Skripal. Sergei and his daughter Yulia were found collapsed near a mall in Salisbury last March. British investigators eventually determined that a pair of Russian agents using the false names Alexander Petrov and Ruslan Boshirov had traveled to Salisbury and spread a deadly nerve agent on Skripal’s door.

Fortunately, both Sergei and his daughter survived but another woman wasn’t so lucky. Dawn Sturgess had been living with a man named Charlie Rowley. Rowley found what appeared to be a bottle of expensive perfume in the street and brought it home for Sturgess. What neither Rowley or Sturgess knew at the time was that the bottle was what the Russian agents had used to transport the nerve agent. Sturgess exposed herself and later died.

The two men responsible for the assassination attempt appeared on a Kremlin run TV network and claimed they were just tourists who had visited Salisbury to see a famous clock tower. Vladimir Putin himself claimed they were just ordinary Russian citizens. But the two men were soon identified as Russian GRU agents. Alexander Petrov was actually a military doctor named Alexander Yevgenyevich Mishkin. Ruslan Boshirov was actually a decorate Colonel named Anatoliy Chepiga.

Yesterday, France’s Le Monde reported both men were part of a secret Russian team of assassins who planned operations from a base in the French Alps. Today, NBC has confirmation of the story:

A group of elite Russian military intelligence officers, including some of those who planned the poisoning of a defector in Britain, have been operating out of picturesque villages in the French Alps, Western intelligence officials tell NBC News…

Le Monde reported that among the Russians who stayed in France’s Haute-Savoie department in the Alps were Alexander Petrov and Ruslan Boshirov — the alleged cover names of the two GRU agents accused of carrying out the attack on Skripal. French officials told the newspaper they considered the area to have been the unit’s rear base for covert operations in Europe.

The Sun has a bit more:

“This is a unit of the G.R.U. that has been active over the years across Europe,” said one security official.

“It’s been a surprise that the Russians, the G.R.U., this unit, have felt free to go ahead and carry out this extreme malign activity in friendly countries. That’s been a shock.”

The attempted Skripal assassination is just one of several the GRU has carried out on European soil. In 2017, Buzzfeed reported that Russia had carried out more than a dozen hits against Putin’s enemies on British soil. And it’s not just Britain where these assassinations are happening. Just this week German authorities concluded a Russia contract killer was behind the assassination of a former Chechen fighter:

Peter Frank, Germany’s federal prosecutor, said his office would take over the case, identifying the suspect, who is believed to be a Russian contract killer, only as Vadim K., in keeping with German privacy laws…

The German authorities had struggled to identify the suspect since he was taken into police custody in August, after witnesses said they had seen him ride a bicycle up to the victim and shoot him once in the torso and twice in the head before fleeing the scene…

According to the prosecutor, the suspect was carrying a Russian passport when arrested on Aug. 23 that the Russian authorities confirmed as authentic. Although the document identified him as Vadim Andreevich Sokolov, investigators said at the time that they believed the name was fake…

The man’s visa said he had been employed as an engineer since 2017 at a company called Zao Rust, based in St. Petersburg. But according to records in Russia, the company was in “reorganization” in 2019 and had only one employee in 2018, according to the prosecutor.

When the German authorities tried to contact the company, they discovered that the fax number listed for it was the same as that of two other companies, both belonging to the Russian Defense Ministry, the prosecutor said.

Europe is finally catching on, and making public, what Russia has been up to for years. NBC reports authorities are tracking more than 200 Russian operatives in the United States.

WATCH: Schiff Alienates Key Senators With Quote About GOP Heads 'on a Pike'

If Eric Ciaramella is the 'Whistleblower', Then He, IG Michael Atkinson and Adam Schiff Must Be Questioned Under Oath Right Away