Elizabeth Warren announces a new Medicare for All transition plan 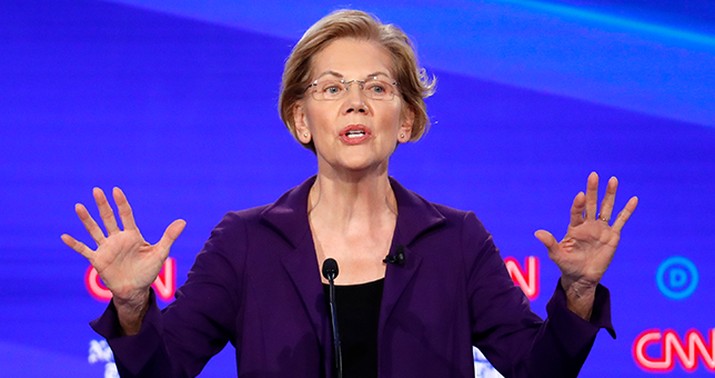 There’s an admission hidden in this new plan or maybe a couple of them. The first admission is that Elizabeth Warren can’t possibly promise Medicare for All anytime soon. The second admission is that her current plan is likely to scare the heck out of a lot of independent voters next November. Rather than admit that this massive disruption to the current system might be a bit much, she’s come up with a new transition plan which pushes off the scary M4A proposal for three years. However, even the new transition plan requires her to deliver on new legislation in the first 100 days which would be substantially bigger in scope than Obamacare. The NY Times says this is an effort to present a compromise which both Biden/Buttigieg supporters and the far left can accept:

Senator Elizabeth Warren vowed on Friday to pass major health care legislation in her first 100 days as president, unveiling a new, detailed plan to significantly expand public health insurance coverage as a first step, and promising to pass a “Medicare for all” system by the end of her third year in office that would cover all Americans.

The initial bill she would seek to pass if elected would be a step short of the broader Medicare for all plan she has championed. But it would substantially expand the reach and generosity of public health insurance, creating a government plan that would offer free coverage to all American children and people earning less than double the federal poverty rate, or about $50,000 for a family of four, and that could be purchased by other Americans who want it…

Her plan attempts to offer something attractive to both sides of the Democratic health care debate, by preserving her commitment to the single-payer vision that energizes voters on the left, while offering a less disruptive set of policies in the short term to those who may be reluctant to give up their existing coverage.

The polling on Medicare for All must be pretty bad. As I’ve been saying for a while, once people see the price tag, the enthusiasm is going to wane. I guess you can give Warren credit for pretty quickly realizing she had bitten off more than Americans were comfortable with and coming up with a completely new plan that kicks the can down the road a little. Still, I don’t think she’s fooling anyone. A spokesman for Biden already called her on what she’s really doing here:

Kate Bedingfield, a deputy campaign manager for Mr. Biden, said Ms. Warren was “trying to muddy the waters even further” after “having discovered how problematic her embrace of Medicare for all has become.”

“What started out as ‘mathematical gymnastics’ have been replaced by a full program of flips and twists covering every element of her plan,” she said, adding that the transition plan “doesn’t change the reality that Medicare for all will deny Americans the right to choose their insurance by eliminating employer-sponsored insurance.”

And she’s right. This isn’t a principled position, it’s a course correction after she realized her fantasy math to pay for this didn’t go over very well. The new plan wisely doesn’t say much about paying for all of this. The proposal uses the word “free” 13 separate times but all you get on the costs is this:

I have identified cost reforms that would save our health system trillions of dollars when implemented in a full Medicare for All system. The more limited leverage of a Medicare for All option plan will accordingly limit its ability to achieve these savings — but as more individuals join, this leverage will increase and costs will go down. Provider reimbursement for this plan will start above current Medicare rates for all providers, and be reduced every year as providers’ administrative and delivery costs decrease until they begin to approach the targets in my Medicare for All plan. The size of these adjustments will be governed by overall plan size and the progress of provider adjustment to new, lower rates.

It’s literally just a link to her previous proposal to pay for M4A but she never specifies which savings or taxes would cover the cost of the new plan or even how much she thinks the new plan will cost relative to the previous one. And speaking of fantasies, there’s another problem. Warren’s entire plan assumes she’s going to have control of the Senate in her first 100 days in office:

I am a strong supporter of eliminating the filibuster, which I believe is essential to preventing right-wing Senators who function as wholly owned subsidiaries of major American industries from blocking real legislative change in America. Any candidate for president who does not support this change should acknowledge the extreme difficulty of enacting their preferred legislative agenda. But I’m not going to wait for this to happen to start improving health care — and I’m not going to give Mitch McConnell or the Republicans a veto over my entire health care agenda.

That’s why, within my first 100 days, I will pass my own fast-track budget reconciliation legislation to enact a substantial portion of my Medicare for All agenda — including establishing a true Medicare for All option that’s free for millions and affordable for everyone.

That threw me the first time I read it. Why would Mitch McConnell need to use the filibuster…? Oh! I see.

Obviously she’s assuming she’ll have a majority in the Senate and McConnell will be using the filibuster to stop her as Minority Leader. She’s saying she’ll get around that by using reconciliation. But what is she going to do if Democrats don’t take the Senate? This whole plan would immediately collapse.

Even if she gets the Senate, she’s promising we’ll once again have a major disruption to the healthcare system plus massive new taxes to pay for it passed by a bare minority from one party. What could possibly go wrong? It’s not like there was any backlash to that last time, right?