Biden to mayors: Minimum-wage hike is all but dead 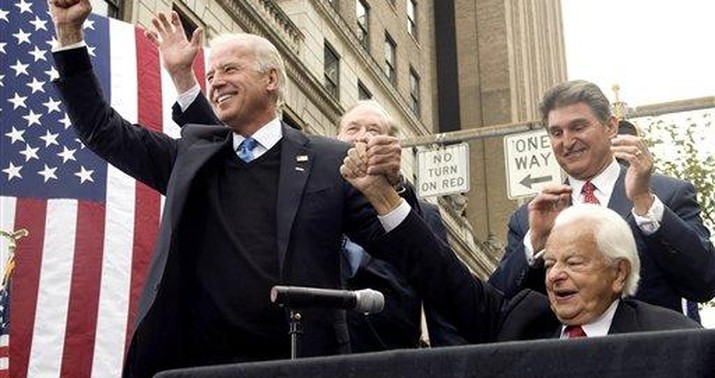 This proposal should die on its own merits, but that isn’t what Joe Biden told mayors last week. The last thing employers need at the moment is an artificial increase in the price of labor when they’re struggling to meet payroll as it is. Hiking the minimum wage by twice its current level over the next five years will put a lot of small business owners under, cost tons of entry-level jobs, but will make larger companies that can afford automation very very happy.

That’s not why Biden’s pulling down expectations for the “fight for $15” to be part of the reconciliation package for COVID-19 relief, though. Biden knows it won’t get past the parliamentarian in the Senate — and even if it did, the minimum-wage hike would shortly be stricken by amendments, thanks to Democratic defections:

When Joe Biden met with a group of mayors and governors last week he bluntly told them to get ready for a legislative defeat: his proposed minimum wage hike was unlikely to happen, he said, at least in the near term.

“I really want this in there but it just doesn’t look like we can do it because of reconciliation,” Biden told the group, according to a person in the room. “I’m not going to give up. But right now, we have to prepare for this not making it.”

The comments, which were confirmed by two other people familiar with the conversation, were the furthest Biden has gone in conceding the coming axing of the $15-an-hour minimum wage provision from his first major legislative package. And they suggest that the president is more inclined to manage the fallout of it not being included than to pursue long-shot, political-capital consuming efforts to fight for its insertion.

This is a matter of simple math — and not of the economic variety. Put simply, 48 is not 50. Senate Democrats Joe Manchin (WV) and Kyrsten Sinema (AZ) have made it clear that they will not support a minimum-wage hike in the COVID-19 bill, and Manchin also opposes a national $15 minimum as well. Since Democrats need all 50 of their caucus to pass the overall bill — along with Kamala Harris’ tie-breaking vote — any defectors mean the end of the overall package and its reconciliation “envelope.” If that fails, Biden will have to start over from scratch and then get past a 60-vote cloture threshold to pass his relief/stimulus bill.

In Princess Bride terms, it might still only be mostly dead — or so its advocates hope. They have brought out the bellows and are trying to pump breath back into the proposal, but confrontations with Manchin and Sinema have not had the desired effect. Activists flopped with Manchin and now are taking aim at Sinema anyway:

After a meeting with Senator Joe Manchin (D-WV) on Thursday, Rev. Dr. William J. Barber II, co-chair of the Poor People’s Campaign, told reporters that activists would protest against the senator in West Virginia, and also demonstrate against Sen. Sinema (D-AZ) in her home state.

Speaking alongside low wage West Virginians who also met with Manchin, Barber said the pair were “betraying” the promises made by the Democratic Party ahead of the presidential election, and the subsequent Georgia runoff elections.

“We’ll be on the ground in West Virginia next week, and in Arizona because we’ve got a Democratic senator out there that’s betraying what the promises were,” he said. The activist later confirmed that people would be “at the offices” of the senators for socially distanced protests.

That strategy would definitely help push Manchin … right into the arms of the GOP. Progressives might think that the relatively poorer electorate in West Virginia might respond to such attacks, but West Virginians have a long history of progressives (and others) imposing solutions on their issues, and it hasn’t worked out well. They finally have reached the peak of their influence in Washington, and they’re not likely to push Manchin out for being insufficiently progressive. In a state where Joe Biden lost every single county in November, Manchin understands that his big risk comes from being seen as Chuck Schumer’s enabler.

Manchin could not have been clearer for weeks on this point. He told Salena Zito a couple of days ago that he will not be moved off the “Byrd rule” that prohibits non-budgetary items in reconciliation bills, nor on the filibuster or “fight for $15”:

“The Byrd rule makes sure that legislation stays within its guardrails or its lanes, which is basically budget-related,” Manchin said in a 44-minute interview with the Washington Examiner.

“I will defend the Byrd rule the same way I defend the filibuster,” he said. “I am not going to just set back and say, ‘Oh, well, he really didn’t mean it,’” he said of the late senator whose seat he now holds. “Sen. Byrd basically protected the institution, and that is how he protected it,” Manchin said of the rule. …

Washington Examiner: Minimum wage in the COVID bill are you concerned about that number and the impact it has on the small business?

Sen. Joe Manchin: Well, first of all, I don’t think this is the place for that. This is not within the guidelines of the guard rails that we talked about, which is basically the budget reconciliation. I’m sure there’ll be a push for that, and we’ll have to see how the parliamentarian rules on it. But first of all, let me make very clear that $7.25 is extremely too low. It should not be $7.25.

In West Virginia it is $8.75. And I truly believe that if a person gets up in the morning and goes to work and they work 40 hours a week, they work 50 weeks out of the year. They should be above the poverty guidelines at the end of the year. They should not be still in poverty trying to make a go of it. And I believe the $11 figure for a base minimum wage for our country gets a person above the poverty guidelines, family of three. It gets them above that. Then, we’d index it based on inflation and GDP. You can index it from there to make sure that we don’t fall back into that long period of no changes whatsoever.

But we’re not preventing any state from going to $15. A lot of states have already gone to $15 because they have large metropolitan economies. A lot of cities have gone to $15. That’s fine. They’re able to do that. But a lot of the rural areas that have little small operators, it’s very difficult, and basically, even the CBO, congressional budget offices, we’re going to lose 900,000 jobs. I can’t afford to lose another job in West Virginia. But with that, I want people to be able to have more money until they find another skill set or have a skill set that produces a better pay. There should be a minimum of $11.

With Manchin that dug in on the Byrd rule and opposition to the “fight for $15,” one has to wonder why activists are bothering to target Sinema at all. Even if she reverses herself — and Sinema has been as adamant about the Byrd rule as Manchin — it still only gets Democrats to 49 at most, short of passage. Moreover, if the bill from the House comes with the “fight for $15” provision in it, Manchin’s vote would effectively strip it in the amendment process. And although no Senate Democrat has been as public about opposition as Manchin and Sinema, it’s very possible that others might vote to strip it as well.

Progressive activists can pretend to live in Utopia. Joe Biden could do that as a candidate, too. Now, however, Biden has to live with actual legislative math, even if he still clings to utopian economics. The minimum wage hike is dead at the federal level at the moment, especially as a part of COVID-19 relief/stimulus, and Biden knows it.