Politico: Haley reached out to Trump for a meeting — and got snubbed 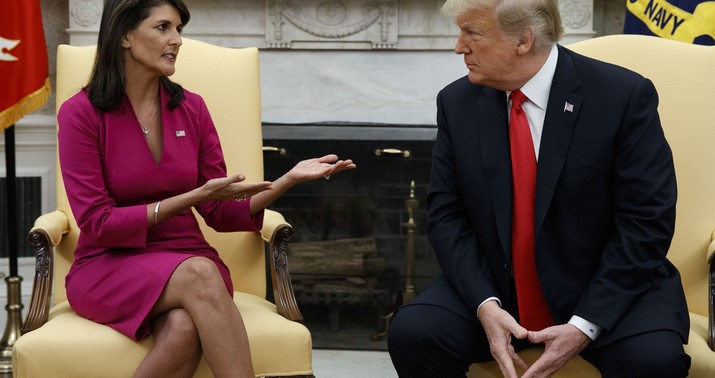 A temperamental dunk, or simply long-range politics? Politico casts this as the former, and that might explain the apparent hostility between Donald Trump and his former ambassador to the UN. Nikki Haley might present other issues than just some recent mild criticism for Trump, however:

NIKKI HALEY reached out to former President DONALD TRUMP on Wednesday to request a sit-down at Mar-a-Lago, but a source familiar tells Playbook that he turned her down. The two haven’t spoken since the insurrection on Jan. 6, when Haley blasted Trump for inciting his supporters to storm the Capitol.

The “source familiar” wouldn’t happen to be someone named John Barron, would it? The Playbook staff thinks this is retribution for a lack of recent loyalty on Haley’s behalf. This results from Haley’s desire to eat her cake and have it too, as posited in Tim Alberta’s profile last week:

Channeling George Costanza in mid-December, Haley refused to confront Trump over his election lies because he believed they were true. “I understand the president. I understand that genuinely, to his core, he believes he was wronged,” Haley told Alberta. “This is not him making it up.”

After Jan. 6, Haley changed her tune.

By yesterday, however, Haley had redirected the fight to one of Trump’s favorite targets — the liberal media. In a Wall Street Journal op-ed, Haley offered a bit more nuance to her earlier criticism, as well as a lot more praise for Trump’s record in office. Rather than report on her actual remarks, Haley accused the media of slicing it up to serve the mainstream media’s own political objectives:

The media playbook starts with the demand that everyone pick sides about Donald Trump —either love or hate everything about him. The moment anyone on the right offers the slightest criticism of the 45th president, the media goes berserk: Republicans are trying to have it both ways! It’s a calculated strategy to pit conservatives against one another. It’s also a ridiculous false choice. Real life is never that simple. Someone can do both good and bad things.

People feel strongly about Mr. Trump, but we can acknowledge reality. People on the left, if they’re honest, can find Trump accomplishments they like—a coronavirus vaccine in record time, Middle East peace, more accountability from China. People on the right can find fault with Trump actions, including on Jan. 6. Right or left, when people make these distinctions, they’re not trying to have it both ways. They’re using their brains.

Just as important, they’re proving people are more than their party affiliations. If we can’t make judgments beyond whether someone is Republican or Democrat, then America can’t face its biggest challenges. We separate into two camps that always hate each other. We become estranged from family and friends over politics.

Is that really what the anti-Trump media wants? Maybe. Hatred and polarization draw attention, ratings and clicks. But what’s good for them is bad for America. Some Never Trump and Always Trump Republicans also attack anyone who doesn’t join the all-or-nothing chorus. That’s not how I saw Mr. Trump conduct himself when I worked with him in the White House, where he engaged in internal debates, welcomed disagreements, and at times changed his mind.

If the media gets its way, the GOP will dissolve into endless warfare, ensuring extreme liberal government for years to come. Instead, Republicans need to be honest about what worked and what didn’t over the past four years.

It’s easy to see why Haley would want a meeting with Trump after publishing this apologia, and why she might have thought Trump would be interested. She needs to have voters see her and Trump on good terms in order to make her pitch to the populists in the GOP coalition. And if Trump has any interest in playing kingmaker for 2024, he needs people to come kiss his ring on a regular basis. Now that Trump has pretty much declared war on Mitch McConnell, that need might have heightened.

But Trump does not appear interested in playing kingmaker. Trump wants to go back to being the king himself. If he plans to make a run for the Republican nomination in 2024, Haley would be one of his toughest opponents. Why, then, should he offer her any kind of rapprochement? Sure, it might be good for the party, and maybe a good way for the country to move on, but since when has Trump had much interest in either of those?

If this is a signal that Trump 2024 is a go, then Haley and other presidential hopefuls who do want to move the party into the future have a very difficult task ahead. They will have to find ways to peel the voters away from Trump while keeping them in the fold, and to do that they will have to demonstrate a similar fondness for the plight of the populists. There’s a reason why Trump succeeded in 2016 where sixteen other Beltway Republicans foundered, and it’s not just the reality-TV rallies.