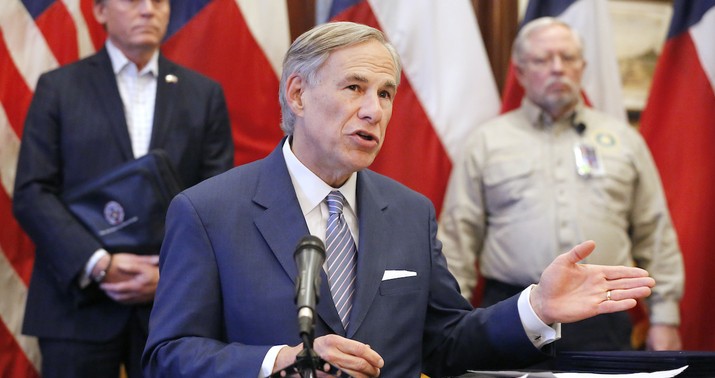 The first big 2021 winter storm has gripped the entire Midwest and parts of the South. It has spawned a tornado in North Carolina and brought traffic to a standstill in Kentucky, but perhaps no state has it worse than Texas. More than four million residents have had to deal with rolling* blackouts on top of the below-freezing temperatures and icy roads, which leaves many at risk now for exposure.

On top of that, cell phone systems and natural gas utilities have also been knocked offline. That leaves some Texans at risk with no way to call for help if necessary:

Elijah Dorminy’s family has depended on their generator to make it through the winter storm that has blanketed Texas since early Monday morning, and he is worried soon even that won’t be an option.

Living in north Texas, Dorminy, his wife and their four children are worried what will happen when they need to refill their generator with gas again. There is only one station with any gas left in Watauga, the suburb of Fort Worth where they live, Dorminy said.

“Pray for us, this is going to be rough,” he told CNN.

Texans have seen snow like they rarely have before as winter storms have torn through the state. More than 4 million people in the state were without power early Tuesday morning, as utilities have been knocked out or frozen over by the bitter cold.

The lack of utilities has already resulted in two deaths, NBC News reports this morning:

At least 25 people have died in weather-related fatalities so far since Thursday, the majority in Texas, as the storm continues to blanket large swathes of the country.

In Texas, two people, among them a child, died from carbon monoxide poisoning after a car was used to generate power for heat, Houston Police said.

More than 4.1 million people are waking up without power in Texas, according to poweroutage.us., as record low temperatures bring a demand for power that the state’s electric grid couldn’t keep up with.

In Abilene, the city had to shut down its water operations, adding a new level of risk to almost 200,000 people:

City has shut off water as a result of power outages from both power sources at all three of its water treatment plants. At this time it is not known when service will be restored. Latest info at https://t.co/t7Xwym7ykj. pic.twitter.com/838uafl8aa

How did Texas end up with such a power deficit? It’s a state built on oil and natural gas production, and a rather famously free-market bent in its state governance. Unfortunately, it’s also a state that has formed its energy production strategies around federal subsidies and federal priorities on renewable energy sources, writes Isaac Orr at Center of the American Experiment. Normally, this wouldn’t be a problem — except in cases of serious storms and cold weather, when those sources become entirely unreliable (via Power Line’s John Hinderaker, also president of CAE):

More than 2.5 million people in Texas are currently experiencing rolling blackouts as temperatures remain in the single digits in many parts of the state. The Lone Star state is currently short of electricity because half of the Texas wind fleet (the largest in the nation) is iced over and incapable of generating electricity. Additionally, the natural gas infrastructure Texas has become so reliant upon has also frozen up.

In contrast, wind and solar depend upon the weather, and natural gas relies upon just-in-time delivery of natural gas via pipeline. Problems with the pipeline network result in issues with natural gas plants and home heating systems. The frigid temperatures in Texas have resulted in nearly 2.8 million power outages, according to the map below.

In Minnesota, which has a similar policy preference for renewable energy, the state requires power producers to keep substantial reserves in place for these kind of weather emergencies — which we get, a lot. Orr explains that energy costs have risen as a result of that policy 23% faster than the national average since 2007. Texas, which has few of these kinds of issues, has kept energy prices down by not requiring this reserve capacity from producers. Instead, they have been allowed to operate on a kind of “just in time” basis, where spot energy prices and demand theoretically allow for flexibility and increased production in times of increased demand.

That is only theoretical, Orr explains. In reality, federal subsidies for renewable energy has produced serious distortions to those energy markets that lead directly to this outcome:

This system works well if all of the different types of power plants have the same ability to provide power on demand, and they all receive the same amount of compensation for the electricity they produce, but this isn’t how it works in Texas.

Federal subsidies for wind pay wind-turbine owners $24 per megawatt-hour for electricity regardless of whether the electricity is needed or not. These subsidies allow wind operators to make money even if electricity prices turn negative. This means some power plant operators need to pay customers money if they continue to supply electricity to the grid when the prices are negative, while wind generators will make money courtesy of our tax dollars.

Eventually, the coal plants close down, as we see in the graph below.

And that’s a yuuuuuge problem now.  Coal plants usually keep weeks or months of fuel on hand and can rapidly expand output as demand increases. Nuclear plants usually only run at full capacity on rare occasions. Both can scale up nearly instantly when emergencies such as week-long winter storms wreak havoc on power demand. The renewables that get subsidies and therefore can put those reliable operations out of business are almost all reliant on good weather. It’s not tough to do the math.

It’s too late for this problem to get corrected in this storm. Texas will need to start finding more power production in other ways right now before Texans freeze to death or choke on carbon monoxide as people get desperate for warmth from unsafe sources. But after this storm passes, the Lone Star State will need to rethink its energy plan and its decision to play follow-the-leader with Washington DC on these policies, or start buying up tons of reserve energy that may otherwise sit around for a long time without necessity. It’s literally a life-and-death decision for Texas, and for other states.

Ed – I’d like to correct one thing…they are not rolling blackouts. They are complete blackouts. I’ve been without power since 6am yesterday & no sign of power coming anytime soon (I’m in the suburbs of Houston – current temp 15 degrees). It’s brutal down here

They were “rolling” yesterday. They’re not “rolling” today.