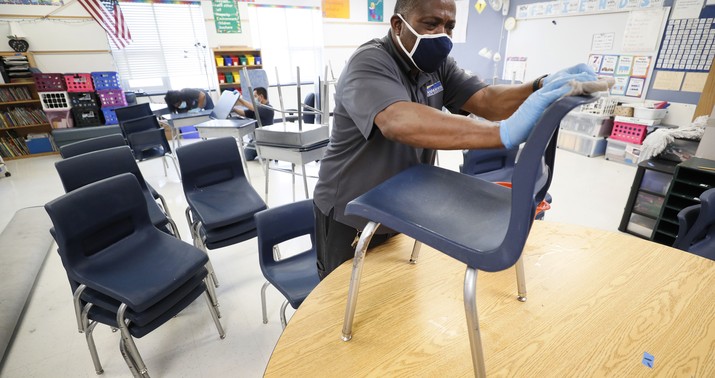 Has Vox decided to take on the teachers unions in a progressive-on-progressive fight? Maybe not Vox per se, but their column from epidemiologist Benjamin Linas certainly does. Linas grants that teachers have legitimate concerns about COVID-19, but that this is not a zero-sum game their unions are playing. The shutdowns harm children emotionally, physically, and psychologically, Linas writes, while the actual risks of schoolroom transmission are minimal at worst with just a few precautions:

Since March 2020, I have been a frontline pandemic health care provider, adviser to my hospital, and consultant to my religious congregation and a local community college — all with the aim of preventing the spread of Covid-19. Toward that goal, I have also been a volunteer member of the public health and safety advisory panel to the Public Schools of Brookline, Massachusetts, where my family lives.

Unfortunately, our panel’s expertise — and that of national and international health groups — have been frequently dismissed by the local educators’ union in favor of their own judgments about best health practices and the safety of in-person learning. In the process, they have misinterpreted scientific guidance and transformed it into a series of litmus tests that keep our district in hybrid learning. These litmus tests are not based on science, they are grounded in anxiety, and they are a major component of the return-to-school quagmire in which we are stuck. …

All of this is frustrating, especially to me as an epidemiologist. Generally, union leaders tie their position to public health guidance from bodies like the CDC. But so far, the implementation of these recommendations by our district’s union — and by many others across the country — has been opportunistic, and their stance does not align with current guidance from the World Health Organization, CDC, Massachusetts Department of Public Health, or the Massachusetts Department of Education. …

But as we approach the one-year anniversary of remote education in America, I find that I am losing sympathy for the educators’ position and their myopic vision this far along into the pandemic. We can open schools safely, and we have the evidence in hand to prove it.

Linas then rattles off a number of studies and real-world outcomes to prove his point. Follow the link to read the rest of his argument, but much of this has already been covered elsewhere, especially in the conservative media. It’s a bit striking to see it at a progressive outlet such as Vox, and perhaps Linas is a bit surprised to be making it there as well. He takes pains to tell readers of his support for unions in general and teachers unions specifically, in part to offer this position as a statement against his normal interests, at least in part.

It’s not just that the unions are in error, either. Linas argues instead that they are operating in bad faith, accusing them of moving goalposts:

The union also named a lack of asymptomatic testing for teachers as a major barrier to return to in-person learning. To get kids back to school, we implemented such a routine testing plan, at great cost and logistical effort. We discovered that since testing began in January 2021, the positivity rate among teachers and staff has been approximately 0.15 percent — while cases were surging in the Boston metro area — and our contact tracing efforts have not identified any cases of in-building transmission.

Even so, the union continues to resist a return to full in-person learning. What’s more, the goalpost seems to have shifted again, now to universal vaccination of teachers.

That goalpost location won’t hold either. Even where teachers got moved to the head of the vaccination line, such as Virginia, they have balked at returning to work. Goalposts got moved there as well:

Again, though, these are criticisms that might be expected here, or at other conservative outlets. Why would progressive outlets be pushing back against an ally like the teachers unions? For one thing, this really does relate to making science-based decisions, and with that a modicum of intellectual integrity. And kudos are in order to Vox for an effort at consistency on that point.

But perhaps Vox and other progressives might be worried about the erosion of support for public schools that these refusals will create. Frustrated parents like Linas will eventually start seeking out alternatives to public schools to get their children into proper educational and social environments. Those whose incomes prevent them from making those choices will agitate for voucher programs to divert funding from moribund public schools. School choice is already fairly popular as a concept, and it’s going to get a lot more popular with parents of children who can’t get back to school. Educational choice would be a disaster for progressives, which is why they have resisted voucher programs for decades.

That might be especially true if the teachers unions keep setting up the roadblocks. Parent will eventually start asking themselves — if teachers can opt out of public schools, why can’t they?