Axios: Say, did anyone notice that Hunter’s lawyer’s partner is now in charge of DoJ prosecution decisions? 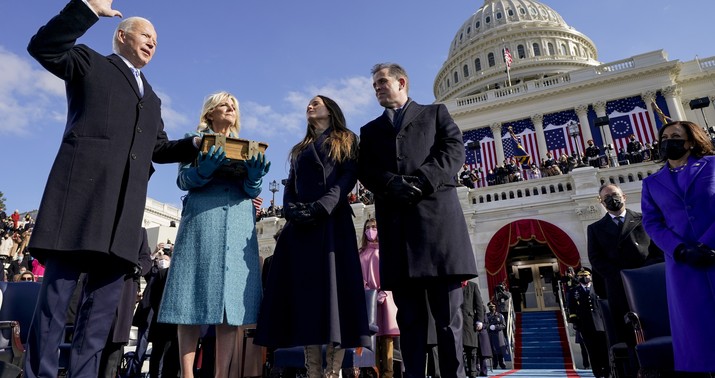 The biggest question here isn’t whether the appointment of Nicholas McQuaid as the top man at the Department of Justice’s criminal division creates a conflict of interest. It’s whether Twitter will ban Lachlan Markay and Axios for reporting on his ties to Hunter Biden. To put it in Kevin Bacon terms, there’s precisely one degree of separation between McQuaid and the president’s son, with that being his former law partner at Latham & Watkins:

Hunter Biden hired a new attorney to assist with his federal criminal defense a month before his father became president. On Inauguration Day, one of that lawyer’s close colleagues was tapped to temporarily lead the Justice Department’s criminal division.

Why it matters: The moves put the new DOJ official atop a powerful arm of the justice system as his former colleague represents a client fending off a criminal probe. While their connection will fuel scrutiny of a politically charged matter, ethics experts say strictly adhering to conflict-of-interest rules can address any legitimate concerns.

What’s happening: In December, Hunter Biden hired former federal prosecutor Chris Clark, a partner at the firm Latham & Watkins. The president’s younger son is said to be under investigation for possible tax and money laundering activities, with a potential counterintelligence component.

At Latham, Clark worked on multiple cases with Nicholas McQuaid, another partner in the firm’s white-collar defense and investigations practice who is now leading DOJ’s criminal division.

Is this just a coincidence? If so, it’s a reeeaaaally convenient one, as well as an oddly quiet one. Tucker Carlson reported on this a few days ago, but it has gone almost entirely unnoticed otherwise until Markay’s report this morning. Carlson asked the DoJ for comment, which apparently didn’t respond to either Carlson or the Washington Examiner:

“On Jan. 21 of this year, the same day Nicholas McQuaid was featured in the Justice Department press release, Latham & Watkins filed a motion in court to withdraw McQuaid as an attorney [in a case] he was working on with Christopher Clark. So that means Joe Biden put at the head of the criminal division the partner of the guy his son had hired to defend him against the criminal division. Whoa,” Carlson said.

“We reached out to the Justice Department for a comment on this,” Carlson added. “They refused to say whether McQuaid would recuse himself for matters involving Hunter Biden and his former partner, who is representing Hunter Biden. It’s all pretty amazing. Another reminder, there’s a lot going on within the Biden family.”

The Justice Department did not immediately respond to the Washington Examiner’s request for comment.

Hmmmm. If I recall correctly, the media seemed very interested in questions about recusals and conflicts of interest in investigations involving a new incoming administration. The DoJ investigation into Hunter Biden’s business activities is well known by now, and yet only Axios, the Washington Examiner, Tucker Carlson, and Fox News show any interest in what would be a potential double conflict of interest.

That makes the ethical experts’ reassurances to Axios less than comforting. Yes, McQuaid could recuse himself, but if that was the case, why hasn’t the DoJ announced the recusal? It’s tough enough for the DoJ to conduct a credible investigation into the family member of the president. Picking the law partner of the son’s attorney to make prosecution decisions while this probe is being conducted is like throwing gasoline on a swampy fire, so to speak.

At the very least, McQuaid’s appointment under these circumstances should raise some eyebrows. And the lack of transparency on this coincidence among coincidences doesn’t exactly build confidence in the “business as usual” that Joe Biden promises.