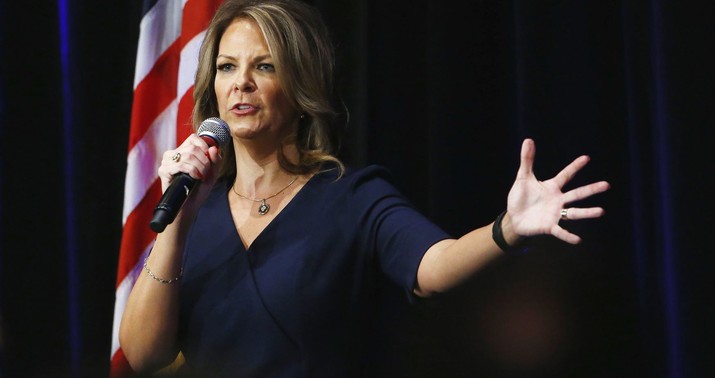 After months of sounding the alarm on what she claimed was a stolen presidential election, Kelli Ward is facing questions about her own reelection Saturday as Arizona Republican Party chair.

Sergio Arellano, the southern Arizona businessman who narrowly lost to Ward in a runoff, has asked state party officials for an audit of the election results, said Kim Owens, a Republican consultant who is serving as his spokeswoman. …

“This isn’t about the chairman’s race, this is about election integrity,” Arellano said in a written statement provided by Owens to The Arizona Republic.

Was the state Republican leadership election stolen? Arellano isn’t claiming that — yet, anyway — but it did have at least one irregularity. Apparently one result got changed at the end unexpectedly, and that has Arellano and his supporters wondering what happened. Maybe some people brought tubs of ballots in at the last minute? Hey, all we’re doing is asking questions:

Doubts about the results of the chair’s race started to swirl after the announced winner in another race, for the at-large committee member from the 8th Congressional District, was informed she had lost.

Arellano said that error “created an environment where a number of state committeemen are raising concerns and asking me to ask for an audit because only a candidate for party office can do so. So I’ve done that and we’re waiting for a response that lays out the when, where, and how of that process. I anticipate the State GOP will do a solid job here and provide election officials around the state with an example of how to conduct a timely audit and how important ballot security and paper backups are.”

Owens also commented on the integrity issue, and suggested that Ward’s win lacked it:

Owens said of the challenge: “This is not about one person or one race, it’s about the integrity of our elections. With the absence of the tapes from the machines or any documentation of where votes came from, and in most races, a lack of numbers, of tallies, we need to see evidence that everything is as it should be.”

Ward only won by 42 votes, although that was enough to make the second-ballot race 52/48, so it wouldn’t take much for an audit to suggest that both Arellano and at-large candidate Sandra Dowling actually won those races. Ward herself didn’t seem terribly concerned about this strange sequence of events. According to the Republic, she shrugged off Dowling’s late reversal as “human error,” which surely would require an audit or a run-off.

If we’re playing by the New Republican Rules, it might even require a do-over. Maybe they should have used Dominion’s systems for the new election. After all, as shown in Georgia hand and machine recounts and their audits after the election, those systems turned out to be incredibly accurate. Otherwise, when Arellano wins the re-do, Ward can demand a re-do, and, well … the Arizona Republican Party can just accelerate its self-destruction.

Gavin Newsom's Reaction to Texas Reopening Is a Sight to Behold