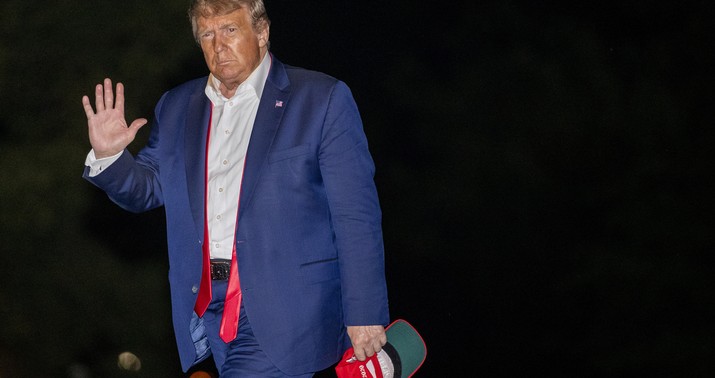 On one hand, this seems rather quotidian after already announcing that he wouldn’t attend the inauguration. However, this Associated Press report about Donald Trump’s intent to leave the city altogether before the event is notable for its implications, in more ways than one:

He will be sent off with a departure ceremony at Joint Base Andrews, according to a person familiar with the planning who spoke on condition of anonymity because Trump’s plans have not been formally announced. Officials are considering an elaborate event that would have the feel of a state visit, with a red carpet, color guard, military band and 21-gun salute all being discussed.

That doesn’t sound terribly elaborate, especially given the event taking place back in Washington at the same time. Perhaps he’s timing it to compete with the inauguration, depending on how “just before” we’re talking about here. The media will be on hand to cover it either way, but it’s much more likely to get split-screen treatment at best, perhaps even at Fox News. At any rate, this is the kind of a ceremony that one might have expected anyway for an outgoing president.

What makes this a bit interesting is the timing of the departure. For one thing, it might put a dent in the QAnon chatter circles that the inauguration is some sort of “mass arrest” event and that Trump won’t need to leave the White House at all, let alone DC. (If you haven’t seen those insane e-mail threads, count yourself lucky.) That alone won’t convince true believers, who will come up with some backup theory about the nation’s capital being moved to Mar-a-Lago, but it might be enough to dissuade them from showing up in DC in the first place.

For another, though, Trump’s business has hardly been concluded in Washington — at least not yet. The Senate might take up Trump’s impeachment that very afternoon or the next day at the latest, as incoming Senate Majority Leader Chuck Schumer has indicated. Shouldn’t Trump stick around to coordinate his defense? It’s not as though Trump doesn’t have a place to stay — he owns a hotel in DC, just as he does in Florida.

Thus far, though, it seems that Trump either doesn’t have much interest in mounting a defense, or much help in doing so. Bloomberg reported yesterday that Trump is having trouble finding attorneys to work for him:

Allies of the outgoing president have been canvassing Washington’s legal landscape looking for representation but so far are coming up short. Lawyers who defended him in the previous impeachment trial, including Jay Sekulow and White House Counsel Pat Cipollone, have said no this time, according to people familiar with the matter.

Other lawyers who have defended Trump at times, including former Florida attorney general Pam Bondi, Eric Herschmann, Pat Philbin and Marc Kasowitz aren’t interested in joining a team this time, the people said. Some of the lawyers who don’t want a role have privately said what Trump did was indefensible.

More broadly, a number of prominent law firms have refused to engage in any legal representation involving the president’s actions following the Nov. 3 election.

“I’m not terribly surprised that top tier conservative attorneys who a Republican president might normally turn to would not be interested in jumping on this particular grenade,” said Keith Whittington, a politics professor at Princeton University. “Those who might have been sympathetic to defending the president in other contexts such as his first impeachment don’t necessarily want to defend what he’s done here — both because they aren’t easy to defend and they’ll tarnish people’s professional reputation down the road.”

Even Alan Dershowitz has changed his mind about working for Trump, at least in Congress. You can still get him for prime-time TV hits, however:

“I am not going to be” involved, Dershowitz told the Herald on Thursday, just days after he said he “would” rush to the president’s defense.

Instead, Dershowitz said, “I’m going to be defending him in the court of public opinion.” …

“No legal arguments were presented, no lawyer was allowed to defend him,” Dershowitz said of the House proceedings, adding that in the Senate he believes there will be “no trial or a one-day trial without any real role for a lawyer.”

That’s a fair point about the impeachment, but there certainly would be room and need for legal representation in a Senate trial, however. Perhaps the attorneys worry about taking on a client like Trump and not getting paid for it. Trump might have to rely on allies in Congress to act as his attorney(s). But first, he’d have to show some interest in mounting a defense at all, which thus far hasn’t been the case. Reportedly, White House personnel had to dissuade him from going to the House to personally fight the impeachment, but Trump has been almost totally quiet about it ever since — and about nearly everything else as well.

If Trump really wants to ensure that he can run again for the office, he’d be making plans to robustly defend himself in the trial. Perhaps he just doesn’t think Schumer can pull it off, and at this point it seems very unlikely to result in a conviction even if Schumer can stage one. But leaving like this and as quietly as this portends looks very much like a retreat — a final one, at that.