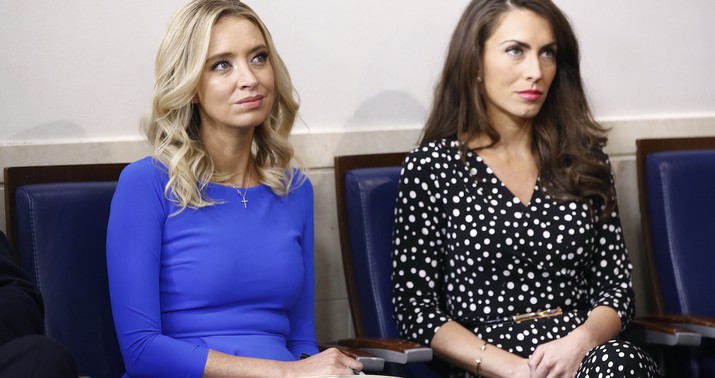 And Alyssa Farah would know. Farah worked in Donald Trump’s White House, following a few years of working in and around other MAGA figures, or at least she did until a month ago or so. In an interview published last night by Politico, Farah says the only state that surprised Trump’s advisers and campaign was — or should have been — Georgia, where their internal polling showed Trump ahead.

Otherwise, their polling “almost perfectly aligned” with internal polling in the other contested states. When it became clear that the Trump campaign was going to argue that the election was stolen anyway, that’s when Farah decided she’d had enough:

So I made the decision back in December to step down because, well, first and foremost, going back to the day after Election Day, I was scheduled to go on TV and was prepared to deliver a message that I was proud of, which is: It looks like we lost, but Republicans were able to turn out record Hispanic support, record African-American support. And we helped get a record number of women elected to the House of Representatives.

But I was advised by the campaign to stand down. That wouldn’t be the message. We weren’t going to be acknowledging the loss, and they were going to pursue avenues to reconcile that. And I’m of the mind that it’s foundational to our democracy that if you think there was fraud or irregularities, the president absolutely should pursue legal recourse to determine if there was. But we’re now at a point where we’ve seen something like 60 cases, and conservative judges ruling against them. And there just has not been compelling evidence of anything to show that the election went any way different than it did.

And I’m someone who worked on the Hill for half a decade prior to going into the administration. And, you know, I’ve always advocated for voter ID. I think we have to have a smart policy discussion about where to go from here to avoid the potential issues of fraud. But we need to come to grips with the fact Republicans lost the election.

So, long answer short: I made the decision to step down in December because I saw where this was heading, and I wasn’t comfortable being a part of sharing this message to the public that the election results might go a different way.

Wednesday’s rally should never have taken place, Farah argued, because the president’s advisers knew well enough that Trump had lost the election. And they knew that they legitimately lost from their own internal data:

And one thing I would just note: The results of the election almost perfectly aligned with our internal polling. So this notion that everyone’s kind of surprised and it turned out so different than we were expecting—I mean, from what I was read into, we always knew Pennsylvania was going to be a huge uphill battle, as was Arizona. North Carolina would be a squeaker. We’d win Florida.

Georgia was the one that we just did not adequately have a read on, on how close that would be. But none of this should have come as a surprise to anyone who was following the data.

I’ll grant that Donald Trump and his campaign are no fans of pollsters, probably not even their own. Remember that Trump famously disdained this kind of data-driven approach in 2016 in favor of rallies and earned media. If that disdain remained with Trump and his advisers in the 2020 campaign (and remember that the RNC was handling a lot of the GOTV and data analytics in 2020), they might not have believed the data when they saw it before the election either.

Still, the fact remains that they had that data in hand when the election results came in. Farah knew it, and knew that it showed the election wasn’t “stolen” at all. It instead matched their own internal data at least closely enough to explain the loss — especially to the people who ran the campaign.

Does that mean Trump doesn’t truly believe he won, despite all the evidence? Not necessarily, but if one grants him that benefit of the doubt, it certainly would make his refusal to deal with reality all the more evident and worrisome. Farah is careful to remain specific and not make assumptions in this interview, but there aren’t many other options regarding Trump with this context in place. It raises more questions about the motives and tactics of his advisers and strategists, too, who have been around long enough to comprehend elections and data. It makes the last six weeks look even more like a grift than it did before — and worse, after Wednesday’s riot on Capitol Hill.