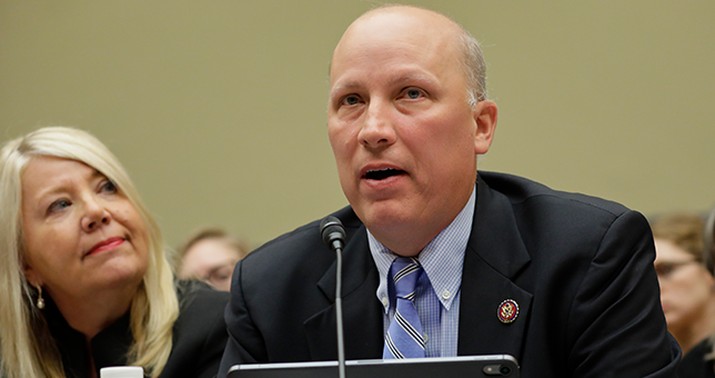 A clever move by Rep. Chip Roy (R-TX), and one that cuts to the heart of the hypocrisy over the move to challenge the electors on behalf of Donald Trump. If the election was rigged, wouldn’t it be rigged all the way down the ballot? And if the standard for disparaging the election process is “many people are asking questions,” then why should anyone take the House or Senate election results from November seriously?

Roy wants his fellow Republicans to put their own seats where their mouths are:

“Such allegations – if true – raise significant doubts about the elections of at least some of the members of the United States House of Representatives that, if not formally addressed, could cast a dark cloud of suspicion over the validity of this body for the duration of the 117th Congress,” he said in a statement. “After all, those representatives were elected through the very same systems – with the same ballot procedures, with the same signature validations, with the same broadly applied decisions of executive and judicial branch officials – as were the electors chosen for the President of the United States under the laws of those states, which have become the subject of national controversy.”

“And while the legislatures of those states have sent us no formal indication that the results of these elections should not be honored by this body, it would confound basic human reason if the presidential results were to face objection while the congressional results of the same process escaped without public scrutiny,” he added.

Roy will force his fellow House Republicans to experience the same burden-shifting with which they have indulged Trump for the last several weeks. Trump and his allies have utterly failed to prove widespread fraud or even malfeasance in court, so now they want their opponents to prove a negative by demanding the overturning of an election if the winner cannot prove the non-existence of widespread fraud. If that’s their standard, then each of those objectors who won seats in the same election should be able to prove the non-existence of fraud in their own wins — right? If they can’t do that, then their only legitimate claim to the office is the certification by the same states whose results they’re rejecting from the same ballot counts.

The logic here is implacable, and it speaks directly to the corrosiveness of the action Roy’s fellow Republicans are taking. If elections can’t be trusted, then why would Congress be above question in determining their outcomes? The members of Congress got their office in those same elections. Undermining the legitimacy of elections undermines their own authority, both now and in the future.

This also points up the value of recognizing the proper placement of the burden of proof. The reason why we don’t engage in endless challenges to elections is because federalism recognizes that the states are the legitimate authority for conducting and certifying them. Those processes have mechanisms for challenges — recounts, audits, and lawsuits — but the burden of proof is on the accuser to prove malfeasance, not the state to prove a negative. The Trump team and its allies launched dozens of lawsuits to challenge the outcomes and couldn’t sustain a single one of them.  The Electoral College vote is the result, and unless Congress has something more than polling and publicity, this challenge is nonsense.

This is precisely why the various state legislatures refused Trump’s entreaties to enable an Electoral College challenge by certifying alternate slates of electors. Their only legitimacy comes from elections, and undermining those — especially on claims that never got proven or even argued in court through the legitimate challenge process — essentially undercuts and eventually destroys the legitimacy of elected office. Not one of these legislatures came close to the self-destruction that House and Senate Republicans will attempt this week on Capitol Hill.

Of course, hypocrisy has a long and glorious tradition in Congress, and this won’t be much different. Those challenging the Electoral College results will no doubt contort logic and facts to justify their own elections while “just asking questions” about the race at the top of the same ballot. Roy’s move is valuable just for getting that shameful hypocrisy on the record for everyone to see.

Unity Watch: As Trump Leaves Office the Left Shows Us They're Miserable, Even in Victory