Enthusiasm gap? Warnock, Ossoff raising tons of money — but not in Georgia 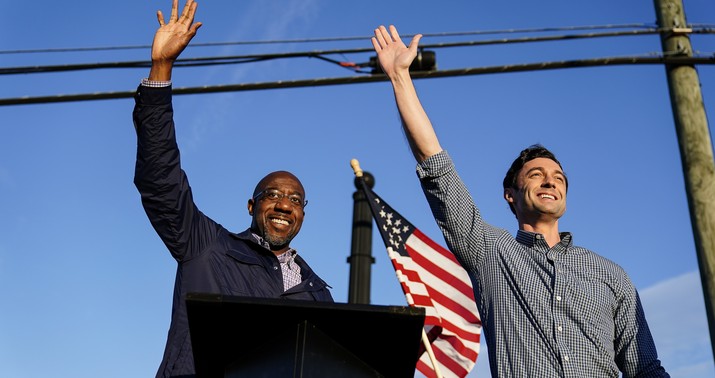 Maybe the third — and fourth — times will be a charm for Senate Democrats. In Kentucky and South Carolina, they poured hundreds of millions in outside cash into challenges against Republican incumbents, only to see Mitch McConnell and Lindsey Graham easily defeat Amy McGrath and Jaime Harrison. Graham mocked “all the liberals in California and New York” in his victory speech last month.

Looks like Graham might get another chance to mock them again, if the New York Post’s reporting is accurate — but only if the two Republicans prevail in Georgia:

As Democrats try to claw back control of the Senate in enormously consequential run-off races on Jan. 5, Ossoff, an investigative journalist, and Warnock, a senior pastor of Ebenezer Baptist Church in Atlanta, each raised a stunning $100 million in the last two months, becoming the best-funded Senate candidates in history.

But 95 percent of that money is coming from outside of the Peach State, records show.

According to a Post review of Federal Election Commission data, Ossoff and Warnock’s biggest financial backers are from the Democratic strongholds of New York City, Los Angeles, San Francisco and Seattle.

How much have Ossoff and Warnock raised in Georgia? Just $2.5 million and $2.6 million, respectively, out of the combined $200 million in direct donations. It’s worth asking just which constituencies Ossoff and Warnock plan to represent; do they stick with Georgia voters once in the Senate, or will they dance with the Angelenos and New Yorkers that brung ’em? That’s one question Georgia voters should be asking themselves. At the very least, that disparity in fundraising makes the two of them look pretty unspectacular in terms of local support.

Another question, though, might be where David Perdue and Kelly Loeffler’s direct fundraising originates. The two have combined for about $130 million in direct donations, but the Post doesn’t drill down in their records for any comparisons between in-state and out-of-state origins. Unfortunately, the FEC doesn’t yet have contribution records handy for any donations made after mid-October on its website; the Post must have been working off of internal FEC submissions to get that data on Ossoff and Warnock.

Of course, both parties have nationalized these runoffs, and both parties and their PAC and super-PAC allies have scoured the nation looking for loose cash. Georgia voters might rightly resent big-pocketed outsiders interfering in their political choices, but they can’t help but loooove the economic boost it should provide the state. That makes it tougher to point at this report and scoff at Ossoff and Warnock for getting so much out-of-state cash, even if much of it comes from the progressive power centers while both candidates make pretenses of moderation.

Still … how do they explain only getting 5% of their direct contributions from in-state voters? More importantly, what does that portend in next week’s runoff votes? Money matters, but it’s usually a measure of enthusiasm and support. If the best the two Democrats can do in their own state is a combined $5.1 million, then maybe we might see a repeat of McGrath and Harrison all over again — and Graham can take another shot at big-city liberals and their spending habits.

Mitt Romney Shares His Picks for the Future of the GOP, and Laughter Abounds