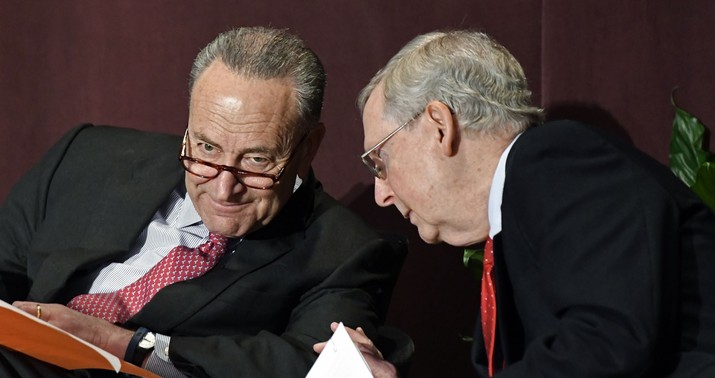 Well, whaddaya know … you really do have to pass the bill to find out what’s in it. In a last-gasp overnight session, the Senate passed both the Phase 4 COVID-19 relief bill and the continuing resolution, both in forms that could have been settled months ago. Both bills will go to the White House for Donald Trump’s signature as soon as the paperwork is readied.

The Phase 4 bill’s parameters were well known enough to be recited in one’s sleep. The CR, however, had a couple of surprises, not the least of which was a codicil reneging on a previous agreement to end tax credits in the wind-energy sector. Senate Republicans objected to the extension, but by then there wasn’t much to be done about it. Which was precisely the point, of course:

Trump is expected to sign the legislation, though it could take a few extra days to get the paperwork ready. As insurance against a partial government shutdown, lawmakers also sent Trump a weeklong continuing resolution on Monday night, with little over an hour until the current funding extension was set to lapse.

The Senate cleared the measure on a 92-6 vote after a brief debate that mainly focused on the underlying bill’s one-year extension of production tax credits for wind energy. Senate Republicans from coal- and natural gas-producing states argued that they discovered the wind credit “surprise” when reviewing the massive 5,593-page bill, and cited a deal cut five years ago to phase the credit out completely.

“I feel like I’m living in episode of the ‘Twilight Zone,’” Sen. Kevin Cramer, R-N.D., said on the floor, referring to the wind credit as a “market-distorting atrocity.” Cramer and fellow North Dakota Republican John Hoeven, along with James Lankford, R-Okla., tried to amend the package to strip out the wind credit extension, but Finance Committee ranking member Ron Wyden, D-Ore., objected.

How do you keep “market distorting atrocities” from appearing as last-minute surprises at the end of a session? For one thing, Congress could — and I’m just spitballing here — write budgets under regular order and in the normal budgeting process. The last time Congress actually did that was in 2012, however, and even by then it was getting to be a rarity. Over the last fifteen years, Congress has developed a very ugly habit of using CRs and then omnibus bills, the latter of which get withheld from members until the last minute.

We give Alexandria Ocasio-Cortez a lot of grief — and rightly so — but she’s spot-on about this (via Twitchy):

It’s not good enough to hear about what’s in the bill. Members of Congress need to see & read the bills we are expected to vote on.

I know it’s “controversial” & I get in trouble for sharing things like this, but the people of this country deserve to know. They deserve better.

When Ted Cruz and AOC agree …

It’s ABSURD to have a $2.5 trillion spending bill negotiated in secret and then—hours later—demand an up-or-down vote on a bill nobody has had time to read. #CongressIsBroken https://t.co/EQp8BfRBHj

These complaints focus on the symptoms. The actual disease is Congress’ unwillingness to use a proper budget process, which is their core function. Refusing to abide by the budgetary deadlines, using CRs for momentary political advantage, and then omnibus bills rather than proper appropriations bills create the conditions about which Cruz and Ocasio-Cortez complain. Both parties control a chamber of Congress, so both parties share that blame — both in the moment and over the last 15 years or so.

At least Congress passed an omnibus bill that completes the FY2021 process. At first, they talked about just using a CR to kick the can until March. The likelihood of continued Republican control of the Senate made that less attractive for Democrats, it seems. While the omnibus stinks badly, at least it’s now out of the way, and the new session of Congress has no excuses for any failure to follow the proper budget process for FY2022.

What about the Phase 4 relief package? It’s everything we’ve heard, and so much less than what could have been. A deal in August could have doubled the direct aid and provided more focused relief, as well as preparing communities for vaccine delivery. That ship had almost sailed by last night:

The U.S. government authorized the first vaccine just 11 days ago, and a second on Friday. But preparations by many state and local health officials began in the summer, with health departments training people to give the shots, scaling up the IT systems needed to track who receives a vaccine and planning outreach to a hesitant public. But a lack of cash on hand led several states to cut those efforts short.

Now the long-sought money is on its way — but state and local officials worry that it could take several months for it to reach communities that are already rushing to vaccinate health care workers and other priority groups.

Nonetheless, both sides are now rushing to take credit for the package, The Hill reports, as well as to shift the blame:

Senate Majority Leader Mitch McConnell (R-Ky.) and Senate Democratic Leader Charles Schumer (D-N.Y.) are both touting the bill as a win, despite neither getting their top priorities in the final measure, and pointing the finger at the other side for not striking a deal earlier.

The legislation passed by Congress late Monday night is in many ways similar to the $1.1 trillion HEALS Act that the White House and Senate Republicans introduced in July, though it doesn’t include the liability protections for businesses that McConnell (R-Ky.) had made a top priority.

Schumer on Monday praised the package, which lacks the $160 billion in new state and local aid previously sought by Democrats, and took shots at McConnell and Sen. Pat Toomey (R-Pa.) while doing so. …

Meanwhile, moderate Republicans and Democrats who put together a $908 billion compromise at the start of the month argued that their proposal sparked the eventual breakthrough in the months-long negotiations.

“Our consensus bill was the foundation of this final package and we applaud Congressional leadership for finishing what we started,” Sens. Joe Manchin (D-W.Va.), Susan Collins (R-Maine), Mark Warner (D-Va.), Mitt Romney (R-Utah) and several others said in a joint statement.

Why anyone would rush to take credit for this relief bill is itself a mystery. It came too late during the decline of disposable income to arrest a recessionary trend, which will likely become painfully obvious when Q4 GDP estimates start landing at the end of January. Congress stalled for weeks while states were closing businesses down and laying off workers. They couldn’t even work together well enough to fund the critical vaccination programs that will save lives and help reopen America’s commerce. The whole thing is an utter failure that should embarrass everyone connected to it.

At least it’s finally over. That’s about the only aspect of this bill worth celebrating.

Fake news: Kelly O'Donnell, April Ryan note that President Trump did not extend the courtesy of an Air Force plane to Joe Biden