Vatican: Pope Francis declares use of COVID-19 vaccines “morally licit” despite concerns over use of aborted fetal tissue 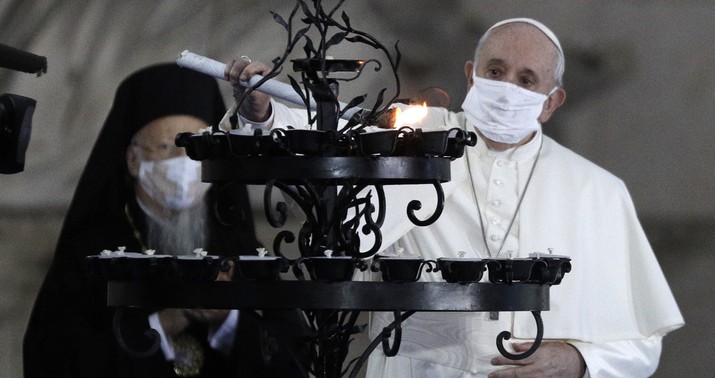 The Vatican acted today to head off a food fight within the Catholic Church over COVID-19 vaccines, but it might have only transferred the headaches. Ever since the vaccine trials began in earnest, Catholic bishops have debated whether Catholics should refuse them over the involvement of fetal stem-cell lines in either development or testing. The conflict has created confusion around the world and in the US, which prompted a declaration from the Congregation for the Defense of the Faith earlier today:

“When ethically irreproachable COVID-19 vaccines are not available — e.g. in countries where vaccines without ethical problems are not made available to physicians and patients or where their distribution is more difficult due to special storage and transport conditions or when various types of vaccines are distributed in the same country but health authorities do not allow citizens to choose the vaccine with which to be inoculated — it is morally acceptable to receive COVID-19 vaccines that have used cell lines from aborted fetuses in their research and production process,” the doctrinal congregation wrote in the new note.

Using these vaccines is morally licit when the “passive material cooperation” with the evil of an abortion “from which these cell lines originate is, on the part of those making use of the resulting vaccines, remote.”

“The moral duty to avoid such passive material cooperation is not obligatory if there is a grave danger, such as the otherwise uncontainable spread of a serious pathological agent — in this case, the pandemic spread of the SARS-CoV-2 virus that causes COVID-19,” it said.

Therefore, in such a case, “all vaccinations recognized as clinically safe and effective can be used in good conscience with the certain knowledge that the use of such vaccines does not constitute formal cooperation with the abortion,” it said.

In case anyone’s wondering, this decision comes from the top:

Issued with the approval of Pope Francis, the doctrinal office said it had issued its ruling following the “diverse and sometimes conflicting pronouncements in the mass media by bishops, Catholic associations, and experts” on the morality of the vaccine.

Catholics are forbidden from “co-operation” with abortion but the note states: “All vaccinations recognised as clinically safe and effective can be used in good conscience with the certain knowledge that the use of such vaccines does not constitute formal cooperation with the abortion from which the cells used in production of the vaccines derive.”

The link takes readers to Vatican News, the official media outlet for the Holy See. The CDF statement doesn’t attempt to draw conclusions about the safety or efficacy of the various vaccines and candidates, but only to make a definitive ruling on the morality of accepting such a vaccine. In this case, the people at risk had no choice on the methodology for the vaccines, and the grave risk of the pandemic means that the moral choice for the common good outweighs — in this instance, anyway — the connections to the abortion that produced the stem cells used for development and/or testing.

That is a delicate tap dance, however, even if the statement encourages Catholics to choose the most ethical option available to them — assuming they have a choice. Of the three top candidates, only AstraZeneca uses fetal stem cells from abortion for development of the vaccine; Pfizer and Moderna used them in laboratory testing but not in development. For most Americans, though, they might end up having to take whatever happens to be available at the time, and developing nations might only get access to AstraZeneca thanks to its price and easy handling.

American bishops should be relieved. They got considerable criticism for essentially the identical position put out by the CDF today:

According to the US Bishops, although all the three vaccines produced by Pfizer, Moderna, and AstraZeneca now available in the US have some connection to cell lines connected to aborted foetuses, their use would be morally justifiable in consideration of the present circumstances. These are: the lack, at present, of an available alternative vaccine “that has absolutely no connection to abortion”, the serious risk to public health and, most importantly, the need to protect the more vulnerable from the disease.

With regard to the AstraZeneca vaccine, the US Bishops note that it is “more morally compromised” than the the other two, and therefore “should be avoided” if there are alternatives available. However, if “one does not really have a choice of vaccine, at least, not without a lengthy delay in immunization that may have serious consequences for one’s health and the health of others”, they state that “it would be permissible” to accept it.

At the same time, the statement cautions Catholics against complacency on abortion: “While having ourselves and our families immunized against COVID-19 with the new vaccines is morally permissible and can be an act of self-love and of charity toward others, we must not allow the gravely immoral nature of abortion to be obscured”. Bishops therefore warn not to weaken the determination “to oppose the evil of abortion itself and the subsequent use of foetal cells in research”.

Indeed, and this is why critics emerged in the first place. The catechism teaches that one cannot do evil to create good, for one thing. More practically, traditional Catholics worry that the pandemic and the undeniable urgency in stopping it will play into the utilitarian arguments for abortion and the use of aborted fetal tissue in scientific research. By condoning the outcomes, does the Vatican run the risk of capitulating to the utilitarians — especially with what looks a bit like a utilitarian argument?

Perhaps on the AstraZeneca vaccine, yes. Still, the people who take that vaccine had nothing to do with either the abortion or the research, and there is a common-good responsibility to protect the most vulnerable from the disease. The minimal involvement of the Pfizer and Moderna vaccines in fetal stem-cell issues should make those a much easier call — and most of us here in the US will likely have access to only those anyway.