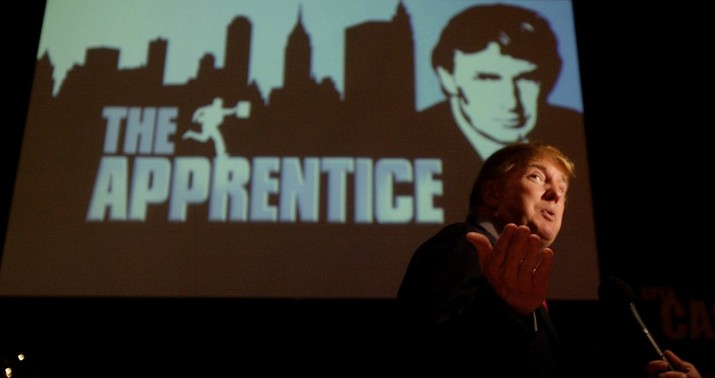 Has Donald Trump tacitly accepted defeat in the 2020 election? While he’s still tweeting about stolen elections and encouraging newly elected senator Tommy Tuberville to challenge the results, The Daily Beast reported overnight that Trump has begun to plan his post-presidential period. Suffice it to say that he’s not planning on spending his time focusing on building a library..

Rather, Trump could end up back where his political career really began — on reality TV:

As he begins his final weeks in office, amid a winter surge in coronavirus deaths, President Donald Trump has mentioned to confidants that he’s thinking about resurrecting The Apprentice or The Celebrity Apprentice reality TV show, two people with direct knowledge of the situation, and another person close to the president, tell The Daily Beast.

Among his inner orbit of family, political aides, and advisers, it is yet another sign that, despite the president’s public insistence that he won the 2020 election, he recognizes that he has lost and that his ongoing legal crusade to cancel Joe Biden’s victory will come up short.

In the past two weeks, the people familiar with the matter note, Trump has casually slipped into conversation lines such as, “How would you like to see The Apprentice come back?” and “Remember The Apprentice?”

That seems a lot more likely a plan than Trump turning into a populist-media mogul. Some expected Trump to buy up outlets like OAN and/or Newsmax and use those to promote himself and his populist brand of politics. That, however, would cost a lot of money and create a lot of work. It’s both easier and more lucrative to go back in front of the camera — and leaves lots of room for Trump to promote himself directly. Who needs to pay a news anchor to talk up Trump when Trump can get paid for doing it himself?

Lachlan Cartwright and Asawin Suebsaeng wonder whether anyone would give Trump a platform, now that he’s so controversial. Excuse me?

The president has also bragged about how much of a ratings draw and money-maker the series was for him and creator and Trump pal Mark Burnett, and that if he wanted to, he could do it again. Whether a network would have him is another question. The Apprentice aired formerly on NBC. But that was an era before Trump was president. And the controversy of his time in office will likely follow him after he leaves.

And the one thing that really doesn’t work for reality TV is … controversy? Come on, man. That’s practically its core product. In fact, reality TV producers bust guts inventing controversy in fear of running out of it. Trump would bring a never-ending supply of it. He’d be the Ultimate Renewable Resource of controversy.

Also, let’s not forget that while Trump lost the election, he got north of 74 million votes in it, adding well over ten million votes from four years earlier. He won’t draw 74 million voters — many of those votes were against Biden rather than for Trump — but he won’t need to draw that many to have a blockbuster. The Masked Singer won a Wednesday night ratings fight last week with 4.9 million viewers, for instance, less than 7% of Trump’s vote. If Trump could reliably pull in 10% of his 2020 vote in prime time, he’d dominate the ratings. Anyone who thinks politics eclipses revenue on that scale doesn’t know the entertainment industry very well.

That doesn’t necessarily mean that NBC would welcome him back with open arms, and Trump might get some resistance (pun intended) at ABC and CBS over his politics. But ratings on that scale cure an awful lot of butthurt over politics, and there are more options than just the old Big Three broadcasters too. In fact, Fox might be interested just to patch things up with the MAGA portion of its audience after the election, on top of the monster ratings they can expect. And if Fox didn’t bite, Trump would almost certainly get offers from cable nets needing a breakout program.

If Trump’s serious about running for office again, this might complicate matters, but only a bit. He’d have to drop the show once he officially launched his campaign, and that might mean only one season or two at the most. The upside? Trump would get a massive platform for his MAGA populism, plus a week-in, week-out opportunity to take potshots at Joe Biden and Democrats.

For normal politicians, a reality-TV gig would look like retreat and cashing in. That doesn’t apply with Trump, as his successful run in 2015-16 proved. He’s a product of reality TV — in fact, one can say that Trump has transformed self-promotion into reality TV. He was doing what the Kardashians did before the Kardashians were born. This doesn’t degrade Trump’s political brand; it is Trump’s political brand. He would calculate that a comeback from this loss requires an instant platform to maintain his cultural impact rather than a licking-one’s-wounds period of introspection, and he’d be correct.

For those reasons, this report from the Daily Beast makes a lot of sense. And if it helps ease the transition for Trump to set up a reality-TV comeback, that’s all the better. If he doesn’t want to make a concession to the reality of his election loss, Trump can at least plan his return to reality TV.