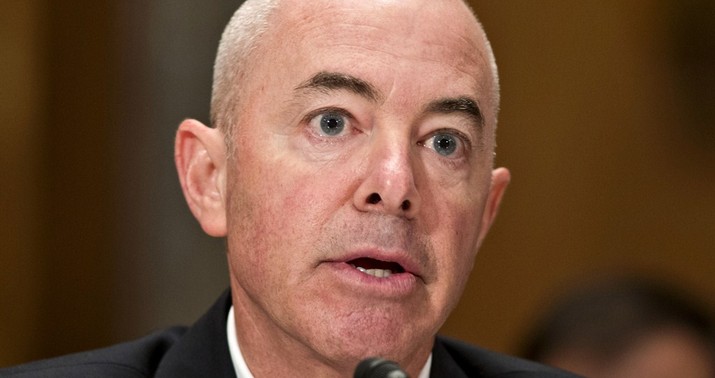 Remember Alejandro Mayorkas? Joe Biden’s decision to appoint him as Secretary of Homeland Security has already raised eyebrows, given his role in securing a presidential pardon from Bill Clinton of a politically connected drug dealer. Senate Republicans already have their pencils sharpened for the confirmation hearings over the Carlos Vignali deal, not just with Mayorkas at DHS but also Xavier Becerra at Health and Human Services.

That’s not the only corruption concern with Mayorkas, CNN reported yesterday. During his time in the Obama administration as US Customs and Immigration Service (USCIS), Mayorkas was the target of an investigation into favoritism and possible corruption. It’s an echo of the same issues that led to the Vignali pardon:

Mayorkas is no stranger to the department, where he was known for connecting personally with staff. Under former President Barack Obama, Mayorkas served as both the DHS deputy secretary and the director of the US Citizenship and Immigration Services, an immigration agency within the department. Prior to joining the Department of Homeland Security, Mayorkas was also a US attorney in the Central District of California. Some of his actions while in those positions have recently resurfaced and could be a factor in his Senate confirmation hearing.

During his time at USCIS, for example, Mayorkas was accused of “giving special access and treatment” to wealthy foreign investors with ties to politically connected people, according to a watchdog report that cited concerns from more than a dozen employees.

The DHS inspector general was unable to determine Mayorkas’ motives for his actions and found each of the decisions was “legitimately within his purview.” He had wide discretion in overseeing the EB-5 visa program.

That actually underplays what the inspector general found. In his fact check of Sen. Tom Cotton’s overstatement of the case against Mayorkas, Washington Post fact checker Glenn Kessler reminds everyone that the IG dug up some very questionable actions from Mayorkas at USCIS:

In the case of Mayorkas, the inspector general began an investigation after receiving a whistleblower complaint in 2012. The report said that Mayorkas intervened in an administrative appeal involving McAuliffe’s car company in 2011; expedited review of investor petitions in the casino deal in 2013, while taking the “extraordinary step” of requiring DHS staff to brief Reid’s staff on a weekly basis for several months; and ordered the reversal of the USCIS decision to deny funding of movie projects in 2013 after he was in contact with Rendell.

“In each of these three instances, but for Mr. Mayorkas’ intervention, the matter would have been decided differently,” John Roth, the inspector general, said in congressional testimony after the report was issued.

Roth detailed the significant resentment that Mayorkas’s actions created in the agency. “The number and variety of witnesses was, in our experience, highly unusual,” he said. “Each conveyed the same factual scenario: Certain applicants and stakeholders received preferential access to DHS leadership and preferential treatment in the manner in which their application or petition was handled.”

Mayorkas’s intervention in these three cases was especially striking because, the report noted, the EB-5 program has hundreds of regional centers to promote economic growth and during the period in question had received more than 700 applications. Roth said the cases stood out because “we found a number of instances in which Mr. Mayorkas declined to become involved in certain matters, stating that he did not think it would be appropriate for the director to do so.”

The McAuliffe in this story is Terry McAuliffe, whose GreenTech car company got tangled up in an alleged visas-for-cash scheme reportedly involving Mayorkas, as well as Hillary Clinton’s brother Tony Rodham. Rodham, readers will recall, was also involved in the Vignali pardon. This scandal emerged in 2013 when Obama attempted to elevate Mayorkas to the deputy secretary position at DHS. The alleged scheme came to light when McAuliffe made the monumental mistake of suing Watchdog.org for reporting on it, and they gleefully connected the dots at that time:

Gulf Coast, which is headed by Anthony Rodham, Hillary Rodham Clinton’s younger brother, is a funding arm of GreenTech Automotive. Virginia gubernatorial candidate Terry McAuliffe was company chairman until April, when the company abruptly announced that he had resigned four months before. He is still an owner.

The financial and political links between the two ventures has been the subject of a series of investigative articles by Watchdog.org over the past eight months. In April, GreenTech filed an $85 million lawsuit against Watchdog.org, alleging libel and saying the news organization’s reporting jeopardized millions of dollars in investments.

An email obtained by the AP said the primary complaint against Mayorkas was that he helped Gulf Coast win approval for an investor visa after the application was denied and an appeal was rejected.

According to the email from the DHS Inspector General’s Office, the investigation of the investor visa program also includes allegations that other USCIS Office of General Counsel officials obstructed an audit of the visa program by the Securities and Exchange Commission. The email did not name any specific official from the general counsel’s office.

That is apparently what prompted the IG probe. Mayorkas didn’t exactly come out of it smelling like a rose, even if he didn’t stink quite as badly as Cotton alleged last week. Mayorkas ended up getting confirmed anyway, but only on a straight party-line vote while Democrats controlled the Senate.

That will not likely be the case in January, when Mayorkas comes up for the top job. His roles in this pay-for-play setup and the equally scummy Vignali pardon will get lots of scrutiny from Senate Republicans whether they control the upper chamber or not. In fact, if they do control it, Mitch McConnell should consider putting the hearings in prime time so as to feature the Clinton-era baggage that Biden’s bringing back into Washington. This is practically gift-wrapped for both the GOP and the progressives across the aisle to demonstrate the moral vacuum within the Biden administration in not one but at least two key Cabinet posts.

Is anyone in the transition bothering to vet these Cabinet candidates at all?