Feinstein on serving out her full term: Let me get back to you 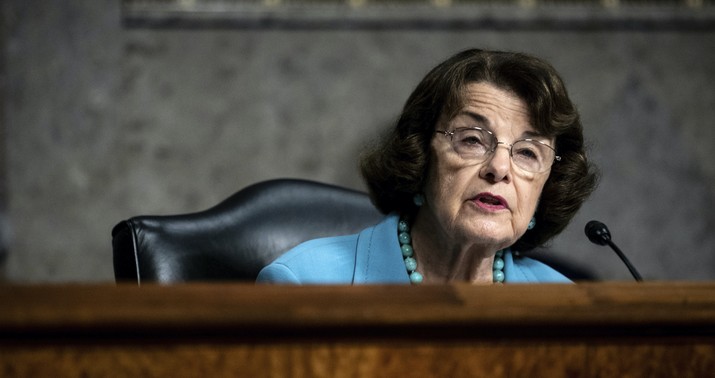 That’s not exactly a confidence builder, Senator. Yesterday morning, the New Yorker flayed Dianne Feinstein as barely compos mentis, thanks to multiple sources on Capitol Hill from her own caucus. Feinstein has deteriorated so badly that Chuck Schumer had to play Groundhog Day in discussing her demotion on the Senate Judiciary Committee. Jane Mayer’s sources all seemed to think Feinstein should be sent back home.

And then, oddly … no one defended Feinstein, not even Feinstein herself. The story just hung in the air all day yesterday, unanswered, even after an editor at the Los Angeles Times demanded her resignation so that she ceased being an impediment to Gavin Newsom’s ability to pander to identity politics. Finally, Feinstein responded today by, er, not committing to finishing out her six-year term:

Sen. Dianne Feinstein, the 87-year-old California Democrat who has faced growing questions about her ability to do her job, defended her service but did not commit to serving out her full term that expires in 2025.

“Well, if it changes, I’ll let you know,” Feinstein told CNN when asked if she would commit to serving out the rest of her term.

Asked if she feels she’s still able to carry out her duties now, Feinstein said: “I do. I work hard. I have good staff. I think I am productive. And I represent the people of California as well as I possibly can.”

Asked if she found the article fair, Feinstein said: “No, not particularly. No one talked to me.” The article noted her office declined to comment.

Did Feinstein forget being asked? Or did no one in her office tell her? And for that matter, assuming Mayer did attempt to get a comment from Feinstein’s office (which is almost certainly the case), their lack of response itself seems rather telling. How tough would it be to put together a quick if non-specific defense of Feinstein to make sure it got included in Mayer’s article? That itself seems like political malpractice … or perhaps a tacit admission that this might be on the level after all, and not just retribution for Feinstein’s hug of Lindsey Graham.

Raju hears that from at least one of Feinstein’s colleagues, albeit anonymously:

If it happens quickly, it might actually solve a couple of problems for Joe Biden and Gavin Newsom, too. The LA Times Erika Smith wrote yesterday about the pressure Newsom is getting to appoint either a black or Hispanic replacement for Kamala Harris’ Senate seat, which is why she wanted Feinstein to be “selfless” so Newsom didn’t take damage in picking one over the other. If Feinstein resigns soon, Newsom could choose Xavier Becerra for her open seat — which would allow Biden to pick someone more qualified for HHS, and avoid a head-on collision with Senate Republicans over his confirmation.

If someone makes that pitch to Feinstein, perhaps she might be enticed into an early retirement … especially with all of the backbiting she’s getting for sticking around now.