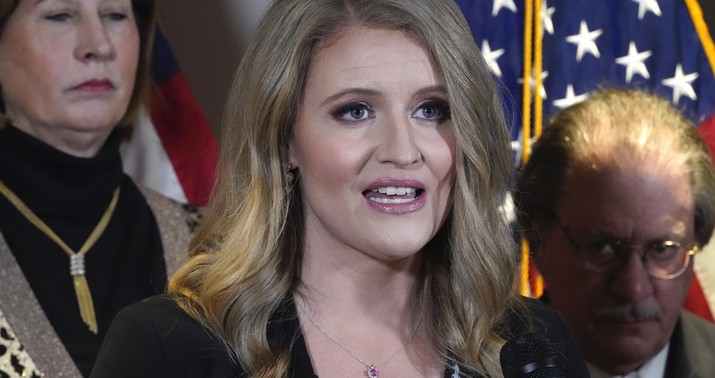 Maybe Sidney Powell should be glad to have been “distanced” from Team Trump’s legal leaders. According to ABC News, Jenna Ellis has informed people that she has now tested positive for COVID-19, shortly after Donald Trump revealed the same diagnosis for Rudy Giuliani. Ellis attended a White House Christmas party on Friday, though, which now has touched off a “panic in the West Wing,” according to ABC’s sources:

Ellis attended a senior staff Christmas party at the White House on Friday, where she was photographed not wearing a mask.

Panic there may or may not be, but anger? Most definitely. Axios’ Jonathan Swan reported that his sources are worried that a maskless Ellis has created another super-spreader event at the White House, and put their families at risk all over again:

Driving the news: There are concerns about the potential for another White House superspreader event, though it was unclear whether Ellis posed a risk when she attended. Ellis declined to confirm the diagnosis to Axios.

“People brought their families,” said one senior White House official who attended the party and has since been informed of Ellis’ diagnosis.

Er … what? People brought families to the White House knowing the lax attitude toward masks and social distancing in this administration? I get the anger, but caveat emptor, dude. What did they think would happen when they played COVID-19 Russian roulette?

They’re angry enough at this point, Swan reports, that they’re beginning to lash out at Ellis for her legal challenges to the election. One “senior administration official” blamed her for pushing Trump into conspiracy theories about the election. The skepticism over Trump’s claims about the election is coming from within the (White) House, and it’s about to burst forth:

“She had the nerve to show up at the senior staff Christmas party knowing everyone was furious with her for constantly stirring Trump up with nonsense,” said a senior administration official.

Swan has been rather famously tied to well-informed sources in the administration, but he’s not the only reporter getting leaks about Ellis and the party. Jake Tapper also heard from a “former senior admin official” about the danger of outbreaks from the holiday parties, which had already been controversial:

2/ “… It is almost certain there will end up being additional administration outbreaks as a result of these parties.”

Forbes also notes that Ellis has been a skeptic of COVID-19’s status as a pandemic. Just two days ago, she scoffed at Arizona’s speaker of the house for closing the legislature for a week after Rudy Giuiani’s appearance last week. “EXCUSE!!” tweeted Ellis:

Absolutely unnecessary. Call Rusty Bowers in AZ and tell him not to use COVID as an EXCUSE!! https://t.co/tWoXAVeWFa

Now it looks more like Giuliani and Ellis are putting even more obstacles into their own paths, and not just legal stumbles either. I think people can cancel their calls to Bowers at this point.

Just a few minutes ago, Ellis tweeted out a criticism of the media for running with anonymous sourcing … but which also doesn’t include a denial:

Funny how MSM is quick to believe one or two unnamed “sources” every time, and yet refuses to acknowledge hundreds of eye witnesses across six states who signed affidavits under oath.

Well, the judges aren’t buying the affidavits either in cases where they have commented on the merits of claims. Affidavits aren’t automatically “believed” (and neither are “sources”); their claims are tested in court to see whether they are material, provable, and applicable to the complaint. That’s why it makes sense to wait for hearings rather than just embrace “affidavits” as a standard of proof.

And besides, Ellis hasn’t claimed that the reporting in this case is erroneous. That might be why the West Wing is angry, if not “panicked,” as ABC puts it.

Anyway, let’s pray for a quick recovery for Ellis and Giuliani, and good fortune for everyone at the White House that might have been exposed to the virus. Perhaps this will be a good lesson to everyone that this pandemic is no joke, and that maybe this isn’t the time to bring families to large Christmas parties.