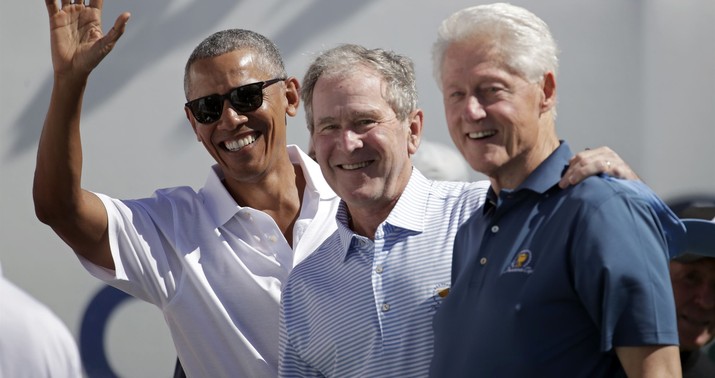 As Reason Magazine put it on Tuesday, vaccines don’t save lives. Vaccinations save lives. So how do we get people to overcome distrust of a new compound, not to mention a small but growing opposition to vaccines in general, to accept a vaccination to stop COVID-19? What force in American culture can get citizens to take action?

Celebrities, of course. But in a more old-fashioned form of leadership, three of the four living former US presidents have pledged to do a Vaccine-a-Thon of sorts, an idea started by George W. Bush:

Freddy Ford, Bush’s chief of staff, told CNN that the 43rd President had reached out to Dr. Anthony Fauci — the director of the National Institute of Allergy and Infectious Diseases and the nation’s top infectious disease expert — and Dr. Deborah Birx, the White House coronavirus response coordinator, to see how he could help promote the vaccine.

“A few weeks ago President Bush asked me to let Dr. Fauci and Dr. Birx know that, when the time is right, he wants to do what he can to help encourage his fellow citizens to get vaccinated,” Ford told CNN. “First, the vaccines need to be deemed safe and administered to the priority populations. Then, President Bush will get in line for his, and will gladly do so on camera.”

Clinton’s press secretary told CNN on Wednesday that he too would be willing to take the vaccine in a public setting in order to promote it.

“President Clinton will definitely take a vaccine as soon as available to him, based on the priorities determined by public health officials. And he will do it in a public setting if it will help urge all Americans to do the same,” Angel Urena said.

Obama jumped into the ring in a prerecorded interview on Sirius XM, which will air today. His concern is that vaccine skepticism might be particularly high in black communities, and Obama wants to make sure they get enthusiastic about vaccination:

“People like Anthony Fauci, who I know, and I’ve worked with, I trust completely,” Obama said. “So, if Anthony Fauci tells me this vaccine is safe, and can vaccinate, you know, immunize you from getting Covid, absolutely, I’m going to take it.”

“I promise you that when it’s been made for people who are less at risk, I will be taking it,” he said.

“I may end up taking it on TV or having it filmed, just so that people know that I trust this science, and what I don’t trust is getting Covid,” he added.

CNN reports that they have reached out to the only other former president still extant, but haven’t yet heard back from Jimmy Carter. He’s been much less publicly active over the last few years, but the man just turned 96 in October, too. It might be a bit much to ask him to do a round of The Vaxxed President on national TV, assuming his health is even up to that kind of effort these days.

It’s a bold move for the other three, and a very welcome volunteer effort to promote vaccinations — specifically COVID-19, but also in general. Reason’s Ronald Klain explains why participation is so important:

In their base case, the pace is 0.5 percent of the population is vaccinated daily and they assumed an eventual coverage of 50 percent of the population. They defined three different epidemic severity scenarios based on basic reproduction numbers, that is, the average number of people to which an infected person will transmit the virus, ranging from a best case of 1.5 to a baseline case of 1.8 to a worst case of 2.1 people. In the best case scenario, people are keeping the basic reproduction number lower by adhering to social distancing, mask wearing, and other preventive practices. The higher number is associated with greater crowding indoors as the weather grows colder. They also sketch out a scenario in which the basic reproduction number is 1.2 cases per infection. As it happens, that appears to be close to the current nationwide level.

Their baseline scenario assumes an epidemic basic reproduction number of 1.8. With no vaccinations, more than 61,000 people out the population of 100,000 would become infected within six months. Cumulative deaths would reach 2,725 and hospitalizations would peak at 1,780 people. The researchers then assume that 50 percent of people are inoculated with a composite vaccine that is 50 percent effective after 42 days at preventing—as well as reducing—disease severity. In that case, total infections drop to around 37,000 (32,000 unvaccinated and 5,000 vaccinated). Cumulative deaths among the unvaccinated fall to 1,430 and to only 16 for those who are vaccinated. Peak hospitalization drops to 962 people. …

In a scenario with a six month time horizon (say, by this June) in which the basic reproduction number is 1.5, the vaccine is 90 percent effective, 1 percent of the population is vaccinated daily, and 90 percent are eventually vaccinated, infections are cut by more than 90 percent below what they would have been without a vaccine. …

The basic reproduction number for the COVID-19 pandemic now depends largely on the actions we choose to take—avoiding crowded indoor spaces, mask wearing, and proper hygiene—to slow the trajectory of the pandemic for the next several months as the vaccines are rolled out. While the highly effective vaccines that appear to be in the pipeline are critical to ending the pandemic, the researchers point out, “the benefits of a vaccine will decline substantially in the event of manufacturing or deployment delays, significant vaccine hesitancy, or greater epidemic severity.”

Every action we can take to boost confidence in vaccination is an important step to saving lives, money, and disruption. Kudos to the three former presidents for stepping up in a crisis to do their part.

Now, if we could only find some real influencers. Can we sign up the Kardashians? The Real Housewives of Beverly Hills? Where are Snooki and J-Woww when you need them?