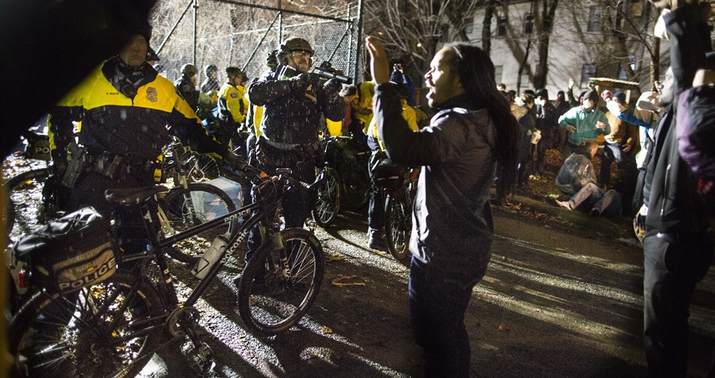 Well, let’s see. Under the old “conventional wisdom” in place, Minneapolis had been experiencing a relatively low-crime period for the last twenty years. The crime wave started in June, when the city council declared its intention to get rid of policing in the city and replace it with … something. Just what should observers blame for the massive spike in violent crime — conventional wisdom or radical sloganeering?

Conventional wisdom, of course, writes city council member Jeremiah Ellison. It’s our new plan that will save Minneapolis and bring peace to the streets. What’s the plan? Er …

Conventional wisdom has produced the results of this summer — from the death of Floyd to the uptick in violence. They are both the result of a century-long failure to create a public safety system that is not police-only. This conventional thinking tells us that the police will solve everything, despite having never done so. And it tells us that we can question policing, or we can have safe communities, but we can’t do, and have, both.

For months, the mayor and the chief have coasted on this conventional wisdom and no plan. Not only no plan to address the uptick in violence, but absolutely no plan to prevent the next police killing. Promises to ban warrior training required a good-faith handshake from Police Federation boss Bob Kroll; promises to halt negotiations with the Federation were broken and illegal to begin with; promises to reform the department became shallow remixes of previous reforms.

I think our communities deserve better, and that starts with addressing our residents’ safety in this budget. It starts with having a plan and the courage to pursue it. …

The budget proposal being authored by three of my colleagues, which I was honored to help shape and wholeheartedly endorse, is how we break from the “increments” that have ultimately gotten us nowhere, and leap into a direction for public safety we can build on. Investing in citywide mental health response teams, growing our violence prevention capacity, and taking nonemergency reporting off the Minneapolis Police Department’s (MPD) plate just makes sense.

The old policies created the crime wave? Does Ellison have an explanation as to how the old policies kept carjackings to a minimum, but they are up 537% in November after the city council’s call to abolish the police altogether? The city’s active police force has been reduced by 20% already. If the council’s abolition plan is superior, shouldn’t we have seen a marked decrease in crime as a result of that attrition?

Besides, Ellison’s flat-out lying about the budget proposal being their “plan.” They never did come up with a “plan.” The Charter Commission pointed that out when the council urged them to approve a police-abolition charter amendment this summer, even though Ellison, Lisa Bender, and the rest of the “abolish the police” crowd couldn’t explain how they would protect public safety without a police force. They’re winging it in the budget process by demanding cuts rather than abolition now, but only because they can’t get rid of the police under the current charter.

Minneapolis residents aren’t fooled by Ellison, at least for the most part. They’re burying the city council in demands to do something about the crime wave, while the council mostly fiddles:

More than 400 people signed up to dial into the livestreamed meeting, a showing unlike any other in recent city memory. Residents were still speaking late into the night.

Some said their homes had been pierced by gunfire. More than 500 people have been killed or wounded by gunshots this year, according to police statistics. Others said carjackings and robberies have prompted them to rethink daily routines like grocery shopping and walking the dog.

“I have just never felt so unsafe recently. This isn’t the Minneapolis I know,” said Brent Johnson, of Whittier, who attributed some of the violence to discussions about defunding the Police Department. …

Daniel Mendez, meanwhile, rejected the notion that calling police comes from a place of privilege and argued that conversations about defunding police had disproportionately harmed people of color.

“I live in fear for my own children being targeted for looking white. They are half white, half Mexican, which makes this whole racial issue a joke,” said Mendez, who identified as Mexican American.

One notable contribution came from former mayor Sharon Sayles Benton, who appeared to chastise the council for its recklessness:

“When it comes to public safety we cannot be a city divided,” she said.