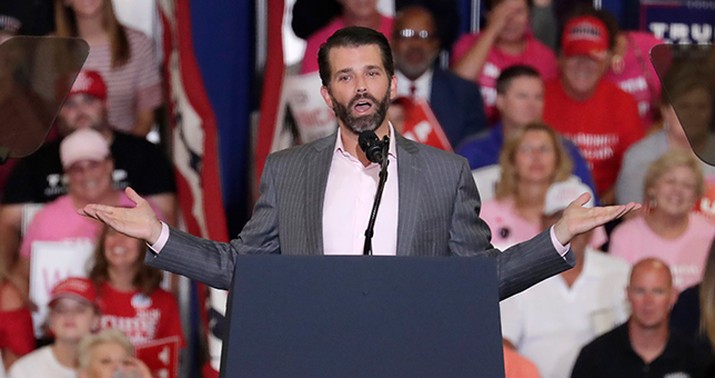 Which message will resonate more in Georgia over the next few weeks, and which messenger will eclipse the other? On one hand, we have Donald Trump Jr fronting a GOTV messaging operation for the two Senate runoffs, exhorting Republicans to come out because every vote counts for David Perdue and Kelly Loeffler. On the other, we have Donald Trump Sr telling Georgia voters that Republicans rigged the presidential election against him while supporting a lawsuit that claims communists controlled the election apparatus.

Loeffler and Perdue might end up getting hoist by Trump’s petard on January 5th:

Advisers to Donald Trump Jr. are launching a super PAC to prod the president’s supporters to vote in the upcoming Georgia Senate runoffs, as Republicans grow concerned that Trump’s backers will boycott the elections.

The group, Save the U.S. Senate PAC, will this week start airing commercials featuring Trump Jr. that are aimed at mobilizing Trump backers across Georgia. A person familiar with the plans said it would be the first in a series of commercials spotlighting Donald Trump Jr. ahead of the of the Jan. 5 vote, which will decide control of the Senate. …

“There is a critical role that must be played in both Georgia Senate runoffs: turning out the Trump vote. We know from past midterms and special elections that the Trump voter is not guaranteed to every Republican candidate, which is why it’s vital to directly engage these voters and not take them for granted,” said Andy Surabian, a Donald Trump Jr. adviser who is helping to steer the new super PAC.

“To that end, we are launching an aggressive campaign in support of the two Republican candidates, focused on energizing and turning out Trump supporters, using television, radio and digital ads featuring Donald Trump Jr.,” Surabian added.

The purpose of this is to stamp out a boycott movement in Georgia that’s being egged on by Trump Sr’s high-profile supporters, including attorney Lin Wood. At least that has the dubious virtue of intellectual consistency, if no other virtue whatsoever. If you really think that Brian Kemp and Brad Raffensperger took part in a conspiracy to allow communists to flip hundreds of thousands of votes away from a Republican presidential candidate via a corrupt Dominion system, why would you participate a second time under the exact same conditions?

To his credit, Trump Jr has been pushing back hard against the boycott message, and now Trump’s advisers are organizing to get him on the air in Georgia to amplify that message. That’s all well and good, but until someone in this super-PAC comes out and says that the idea of a communist-Dominion-Kemp-Raffensperger plot is utter nonsense and that every vote will count, the message isn’t going to sell. The voter bloc they need to reach responds primarily to Trump Sr, and this is the message he’s sending:

NO WAY WE LOST THIS ELECTION! https://t.co/orOXBaR8uE

Actually, this turned out to be another embarrassing moment for the Sidney Powell team. Judge Batten reversed his order when the state explained to him that it has no authority over voting machines. Those are owned and operated by the counties in Georgia, and Powell didn’t sue the counties:

Here's the key paragraph from the new version of the order.

The Kraken only sued the state, not any of the counties. But the counties, not the state control the machines. And the counties aren't before the court, so the court can't order them to do anything. pic.twitter.com/QDPuxKdyvI

D’oh! One might think a team of competent lawyers would have spent five minutes researching that point. Besides, there may be a good reason for the counties to start resetting and prepping the machines — the runoffs. They have to prepare for another two elections in about five weeks, which means certifying their proper operation and the reset of their counts back to zero. Perhaps that can wait another week, but after watching the wild conspiracy theories emerge from the election four weeks ago, one can’t blame the counties for being worried that any irregularities in certification will become fodder for another hung election in January.

The best way for the GOP to get Trump voters to turn out in the runoffs is to stop undermining confidence in Georgia’s voting system. Trump can’t eat his cake while allowing Georgia Republicans to have it, too. This is a game effort but it’s never going to counter the messaging that’s coming from the top of MAGA-land.