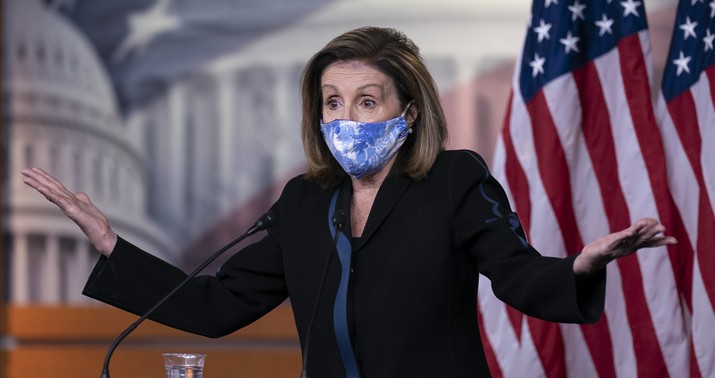 Says who? The Democratic incumbent, actually. Anthony Brindisi apparently filed some sort of legal challenge when the count in NY-22’s congressional election suddenly shifted back to Republican Claudia Tenney. The early math out of Herkimer County turned out to be wrong:

In the latest twist and turn in this race, Tenney once again leads by 12 votes in #NY22

To my understanding, Herkimer had problems with their vote count and simply made some basic math and counting errors the first time around.

Earlier, Tenney and her campaign had complained about irregularities in ballot processing. Needless to say, both shoes are on other feet this morning:

12 News has recieved statements from the offices of Anthony Brindisi and Claudia Tenney regarding the lead change Monday morning.

Statement from the Office of Anthony Brindisi:

“The margin in this race is incredibly close and continues to change. The integrity of the election and maintaining a count that ensures the voters of this district are heard is of the utmost importance. As this process continues to play out, we are hopeful that once the counting process is completed, Anthony will be declared the winner.”

Statement from the Office of Claudia Tenney:

“We are encouraged that local elections officials have corrected their early tabulations and we are now ahead. Our campaign is committed to seeing that all – and only – legal votes count. The voters’ will must be respected and the integrity of the election process maintained. We are confident Claudia will emerge the winner when all is said and done.”

This race will only have one firm conclusion: New York’s electoral system is an utter joke. We are now nearly four weeks out from the election, and the state still hasn’t finished its initial count of ballots. This hasn’t gotten enough attention mainly because it won’t impact the state’s Electoral College slate, as Joe Biden predictably won New York in a landslide. However, what we see in NY-22 is precisely what we saw in the state’s June primary, which is that its system is not capable of efficiently and capably counting ballots and reporting results.

Thanks to the extremely narrow gap, a recount and then ballot challenges are certain to take place. Both sides might end up demanding it, and both sides will inevitably cast some doubt on whatever takes place. Power Line’s Steve Hayward wonders whether a Nancy Pelosi-led House would refuse to seat Tenney and/or Marianette Miller-Meeks, whose lead in IA-02 is down to six votes. There is a precedent for this, Hayward points out:

This refers to Indiana’s 8th Congressional District, where, in the 1984 election, the Republican candidate, Richard McIntyre, who was challenging a Democrat incumbent, trailed narrowly on election night but was certified as the winner by 34 votes after a recount (and a second recount put him up by 400 votes). But the House Democratic majority refused to seat McIntyre in January 1985. Democrats voted to keep the seat vacant pending further “investigations” into the vote count. House Dems appointed a three-member select committee, consisting of two Democrats and one Republican, to look into it, and, citing “irregularities,” the full House voted on party lines in April to seat the Democrat incumbent, despite Indiana’s official certification of the Republican McIntyre as the winner. Democrats rejected Republican proposals to have a special election to settle the matter.

It was a naked partisan power grab, wholly unnecessary given the large Democratic House majority at the time (238-177). Does anyone think Democrats won’t resort to this again, with a majority so tiny that they won’t be able to pass resolutions memorializing National Orange Juice Week?

It’s certainly possible. The House is the final arbiter of its own elections, and it can choose to seat the loser in a race. However, to answer Hayward’s point, it’s a lot easier to do that when you have a 61-seat majority than when your majority is in single digits, and you’re staring down the barrel of a midterm election with Joe Biden as president. The irony is that it’s much easier to get away with this when you don’t really need to do it, and much tougher when you do.

It would take a majority vote to go down this path. Would Pelosi get it with a single-digit majority? Doubtful. Any such attempt would become an instant social-media red siren case,  a phenomenon that didn’t exist in 1985. It would also feed red meat to populists, a political impulse that didn’t have anywhere near the traction it had in 1985 either, and further undermine confidence in Congress. Plus, it’s going to be difficult to keep lashing Donald Trump over his demands for interventions in elections while refusing to seat certified winners in Congress. The media will give Pelosi some cover on that issue, but not total cover.

Alternately, Pelosi could push for a do-over in both elections. That too is politically fraught, especially with Trump and more fringy elements kinda-sorta suggesting that for presidential races in some states. This is a bad cycle for Democrats to do anything that calls into question the electoral processes, even in New York where it’s clearly a disaster.

And that’s the problem with a do-over in NY-22, at least. Why should we have any confidence at all that New York would do any better on a do-over than it did this time around? The lesson here is that New York needs to completely revamp its voting system, preferably with optical-scan paper ballots that allow for quick and efficient counting and little question over the results. New York isn’t the only state that should take a lesson from Florida and Minnesota on how to conduct elections, but it’s pretty clearly the state most in need to do that.

Addendum: John has more on IA-02 coming up shortly.