Axios: Even Jared and Ivanka are distancing themselves from Trump’s election fight 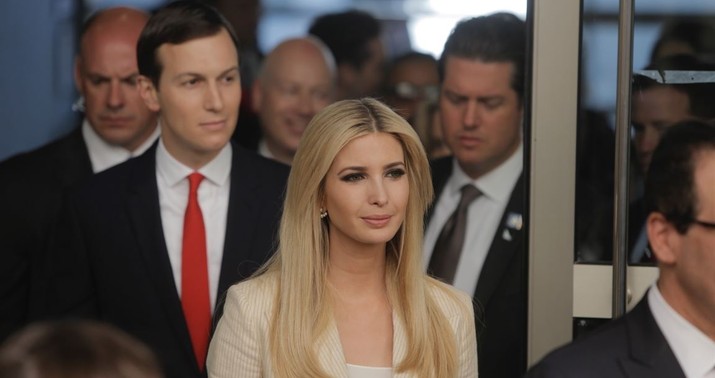 Few reporters have gotten as tied into the White House as Axios’ Jonathan Swan in the Trump years. That might be coming in handier for Swan’s sources than for Swan himself in the meltdown over the election. They’re beginning to practice that well-trodden path of the protective leak, hoping to ironically stay afloat while Donald Trump’s ship sinks, especially after yesterday’s Rudy Giuliani-Sidney Powell presser.

According to Swan’s sources, even his family wants to distance themselves from it:

Most of President Trump’s closest advisers have completely distanced themselves from his legal effort and are avoiding his lawyers to avoid being swept into their courtroom dramas.

Why it matters: Some of the president’s advisers act like they think he can still overturn the election results — because they remain on the payroll and don’t have another choice. But talk to them privately, and many say Rudy Giuliani and his team are on a dead-end path.

The true believers are Giuliani and his sidekicks — Jenna Ellis and Sidney Powell — and not many others. Even Jared and Ivanka think this is going nowhere, people who’ve spoken to them told Axios.

The leaks are definitely putting the blame on Giuliani rather than Trump himself, perhaps a sign that these leaks might not be entirely unsanctioned. While there are complaints about the president (including an obsession with Dominion conspiracy theories), Giuliani gets the most blame. Swan’s sources blame Giuliani for the presser, for a lack of a coherent strategy, and even blame Giuliani for Trump’s performance in the first debate against Joe Biden. They’re now blaming Giuliani for ruining their plans to expose Hunter Biden in October by jumping the gun by impulsively giving the hard drive contents to the New York Post.

Byron York reports more broadly about Republican reaction, but his sources also are playing Pin The Tail On The Attorneys more than on the president:

GROWING CONCERN ABOUT TRUMP LEGAL FIGHT: Thursday’s news conference by Trump lawyers Rudy Giuliani, Sidney Powell, and Jenna Ellis marked a turning point of sorts in the way some Republicans view the president’s challenge to election results around the country. Among those Republicans — Trump supporters all — there is concern that the attorneys’ sensational theories of election fraud are hurting the president’s cause rather than helping it.

Most worrisome was Powell’s presentation. … Powell offered nothing to prove what she said happened. Her case appeared to be that it could have happened. Nor has Powell or the rest of the Trump team filed a lawsuit alleging that it actually occurred. In an interview Thursday night with Fox Business Network’s Lou Dobbs, Powell said the Trump team is “still in the process of collecting evidence. It’s coming in in massive amounts…I would think we would have fraud complaints ready sometime by late next week at the latest.” …

The Republicans saw the entire exercise as moving Trump’s case backward, not forward. Yes, there are legitimate legal issues surrounding the campaign. For example, one of the biggest is in Pennsylvania, where the state supreme court unilaterally changed election law that had been rightfully passed by the legislature. But that case will not change the results in Pennsylvania; it is important for elections in the future. And that is not what Giuliani, Powell, and Ellis are talking about. Without actually making the case, they are talking about a vast conspiracy, directed “from a centralized place,” in Giuliani’s words, to change hundreds of thousands, or millions of votes. By doing so, in the way they are doing it, they are losing support rather than making gains.

If these leaks are just reactions from angry or worried allies, that’s certainly news, albeit of a gossipy sort. However, it sounds as though people around Trump are pushing Giuliani into position as the fall guy when a change of posture is needed by the boss. Thus far, it doesn’t appear that Trump is availing himself of that escape hatch:

Giuliani: The Case for Election Fraud Being Made By Americans https://t.co/yNfaKqYzCO via @BreitbartNews

However, it’s there in case Trump decides he needs it. And no one should realize that potential more than an old pro like Rudy.