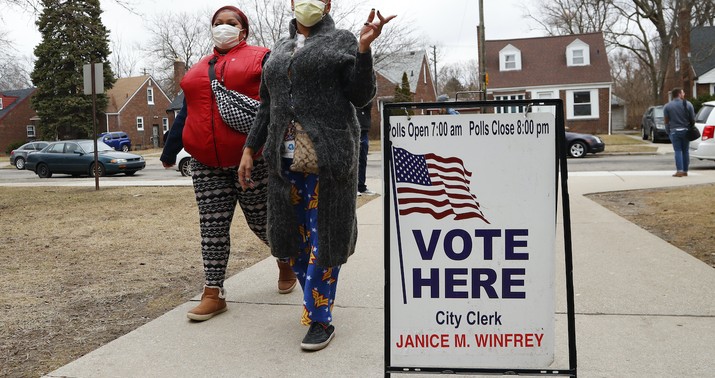 For one brief moment in time, Wayne County Republicans nearly disenfranchised almost 900,000 voters in Michigan in an attempt to use brute partisan force to change the results of the election. After a contentious hearing in which Detroit voters accused the two GOP commissioners of attempting to undermine the black vote in Michigan, the pair swapped positions and certified the election results:

After what was an unprecedented 2-2 deadlock along partisan lines, with the two Republican members of the Wayne County Board of Canvassers voting against certifying the county’s November election results, the board unanimously voted to certify the results late Tuesday night.

The state party initially threw their support behind the deadlock that would have forced the state legislature to decide electors in the state:

Just minutes after the Republican members had voted against certifying the results, the Michigan Republican Party released a statement from Laura Cox, who chairs the state party.

“I am proud that, due to the efforts of the Michigan Republican Party, the Republican National Committee and the Trump Campaign, enough evidence of irregularities and potential voter fraud was uncovered resulting in the Wayne County Board of Canvassers refusing to certify their election results,” Cox said.

Trump himself seemed particularly enthused about the move, cheering it on in a series of tweets such as this:

Wow! Michigan just refused to certify the election results! Having courage is a beautiful thing. The USA stands proud!

Unfortunately, it turns out that other Republicans didn’t share the same enthusiasm for tossing out the results of an election. The Wayne County board’s later reversal probably had more to do with the GOP leader of the legislature refusing to play along:

Democrat Joe Biden is the president-elect, and while Michigan’s Republican-led Legislature is investigating the election, it will not award the state’s 16 electors to GOP President Donald Trump, Senate Majority Leader Mike Shirkey told Bridge on Tuesday. …

Conservative groups have also started phone and letter-writing campaigns in an attempt to persuade legislative Republicans to decide the election for Trump.

“That’s not going to happen,” Shirkey, R-Clarklake, said in a wide-ranging interview with Bridge Michigan. He noted state law awards electors to the winner of the state’s popular vote. And Biden won the state by more than 146,000 votes, according to unofficial results.

“We are going to follow the law and follow the process,” he said. “I do believe there’s reason to go slow and deliberate as we evaluate the allegations that have been raised.”

Remember that this isn’t Arizona or Georgia. Trump won Michigan in 2016 by a little over 10,000 votes, but he lost in 2020 by fourteen times that amount. Imagine the screaming from Republicans if Hillary Clinton had tried an end run around Trump-heavy counting on the basis of election irregularities in this way.

Shirkey wants the legislature to get to the bottom of any discrepancies too, but he’s not interested in committing political suicide by effectively making elections worthless just to get on Trump’s good side momentarily. His standing depends on respecting election results, after all. It’s clear that the level of discrepancies don’t add up to anything close that would overturn the election, and Shirkey’s not sure why Trump keeps insisting that he won:

Asked about Trump’s repeated claims that he won Michigan, the highest-ranking Republican in the state Legislature said he does not know what the president is thinking.

After Shirkey made it clear that the legislature wouldn’t be voiding the election results, the Republican commissioners on the Wayne County board sounded a retreat. The unanimous vote to certify the county results will allow the state to certify results, which itself then provides opportunities for challenges on various grounds. The legislature still plans to investigate irregularities in both the primaries and the general election, but it’s not about to torch the same democratic processes that guarantee their authority to conduct those investigations.

At some point, Republicans and conservatives especially had better think through the implications of cheering the idea of invalidating elections and disenfranchising massive blocs of voters. Progressives are the entities that cheer on the replacement of institutions, including elections and constitutional governance in favor of the populist revolt model, a la CHAZ. That way bulldozes rights and imposes the tyranny of the mob. Conservatism is supposed to conserve those institutions while realigning them on proper constitutional principles, in order to best preserve natural rights. If a 146,000-vote popular vote win in a state no longer holds any value and all that matters is power and grasping it at any cost, then what precisely are we conserving?

For a last thought, allow me to share one of the key scenes from the film A Man for All Seasons. We conserve institutions of pluralistic and representative democracy — including elections — for a reason, because without them … the devil always turns back on us.