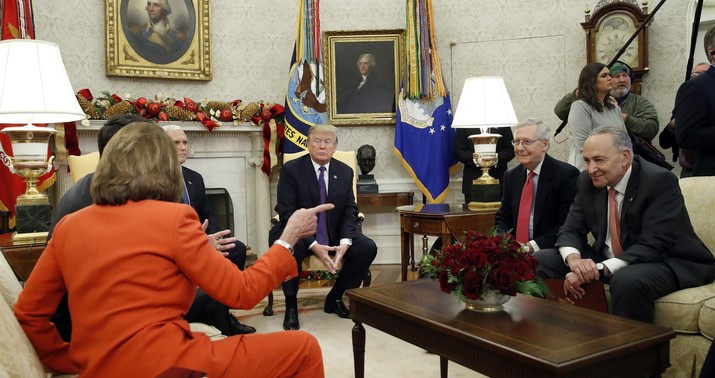 Where does Congress stand on Phase 4 relief negotiations? Very far apart, apparently, and at a very bad time. COVID-19 cases are hitting new record peaks across the nation, and governors are ordering the most significant restrictions on commerce. We’re getting close to the same economic conditions as we saw in late April or early May when states started gradually reopening public squares, and which required a “bridge loan” of relief programs to keep businesses operating.

This time around, we have a much brighter light on the horizon. Highly effective vaccines will shortly become available in vast quantities, but they still need funding for distribution:

In the wake of Moderna announcing that its coronavirus vaccine candidate is nearly 95 percent effective, the CDC is preparing vaccine distribution strategies. @Miguelnbc has the details. pic.twitter.com/TxUTPuHkpC

The Moderna vaccine can use existing distribution channels, but the Pfizer vaccine requires special refrigeration. We don’t presently have the infrastructure in place to deal with that, which means that Congress needs to act to put funding on the table to allow both vaccines to be effectively used — which will eventually eliminate the need for commerce restrictions altogether.

With that incentive in mind, has Congress come closer to an agreement on Phase 4 relief? Of course not, and that will have a much broader impact than just the vaccine-distribution issue:

THERE ARE NO CONVERSATIONS right now about another round of Covid relief. None. The White House is silent. The Hill is quiet. That means no new programs, no new money for Americans before the holiday season.

BUT EQUALLY NOTABLY, a number of crucial provisions expire at the end of this year, which is 44 DAYS from now:

THE PANDEMIC EMERGENCY UNEMPLOYMENT COMPENSATION, which gives 13 weeks of extra UI to those who have run out of options, ends. … THE PANDEMIC UNEMPLOYMENT ASSISTANCE — used by gig workers — runs out. …

Politico has a list of all the programs that will come to a screeching halt on December 31. Many people may not have a full grasp of what funding remained in place after the expiration of the CARES Act. You can bet your bottom dollar that a whole lot more will learn it at that point, and if the economy begins to crater under the weight of new lockdowns, your bottom dollar may well be on the table.

Roll Call also doesn’t see much movement before the next session of Congress:

Republicans and Democrats are no closer to a compromise than they were before the election, when there was some incentive for all involved to get an agreement. On Thursday, McConnell said he supports another package, but one similar to a $519 billion bill that Senate Republicans proposed last month rather than “something dramatically larger.”

Pelosi, who has pushed for a $2 trillion-plus package, doubled down at a postelection news conference, saying a “smaller package” envisioned by Republicans “does not appeal to me at all because they still have not agreed to crush the virus.”

And Biden would probably prefer to have a hand in shaping the next major pandemic package. “Biden has said his job No. 1 is COVID, and I think he would be happy to have a White House signing ceremony in late January or February on a COVID package that Trump couldn’t get done,” Kahn said.

Given all the political calculating going on, it’s easy to see everything punted into the new calendar year. Nevertheless, there is intense pressure to enact relief now given record U.S. coronavirus cases and a shaky economic recovery that’s vulnerable to renewed lockdowns.

In some ways, the incentives evaporated after the election. Before the election, a big relief bill would have been popular with voters, but now there’s no need to pander. Had Trump been re-elected, the incentives to spend might have remained, since neither side would have gained by kicking the can into the next administration and Trump would have wanted it off his plate for a second term. Now, however, Trump has nothing to gain from signing a big bill — although it’s clear that Trump still wants to sign one. Democrats no longer have to fear losing control of the House after the end of the month, and Republicans are almost certain to keep control of the Senate. Signing off on a Pelosi bill at this point might damage their ability to motivate Georgia conservatives in the runoffs, too.

This will have significant economic repercussions in the fourth quarter. The third quarter GDP report made it clear that consumers had run through their savings and that their disposable income was falling again. The boost from the CARES Act has all but exhausted itself, and now we’re looking at new rounds of business closures and job destruction as we enter the cold-weather season throughout most of the US. A lack of stimulus plus the expiration of the support programs that continued past the CARES Act will make for a very bleak winter, unless Nancy Pelosi and Mitch McConnell make very good use of the 44 days they have left.

U.S. retail sales rose in October at the slowest pace in six months, suggesting consumers are becoming more hesitant amid a surging pandemic and lack of fresh federal stimulus.

The value of total sales increased 0.3% from the prior month, when there was a downwardly revised 1.6% gain, Commerce Department figures showed Tuesday. The median estimate in a Bloomberg survey of economists called for a 0.5% increase. Excluding autos and gasoline, sales rose 0.2%, compared with estimates for a 0.6% gain.

Weaker momentum in consumer spending — which accounts for two-thirds of the economy — indicates growth could slow more sharply following the third quarter’s record jump in gross domestic product. November and December could prove tougher with states and cities reimposing restrictions on indoor dining and non-essential business to contain a rampant coronavirus, while hopes for additional fiscal stimulus this year keep fading and political uncertainty hangs over government policy.

Consumers react to incentives, too. And right now, the incentives from Washington all point to hoarding resources.

CNN Accuses Tucker Carlson of Getting His Facts Wrong, But They End up Beclowning Themselves