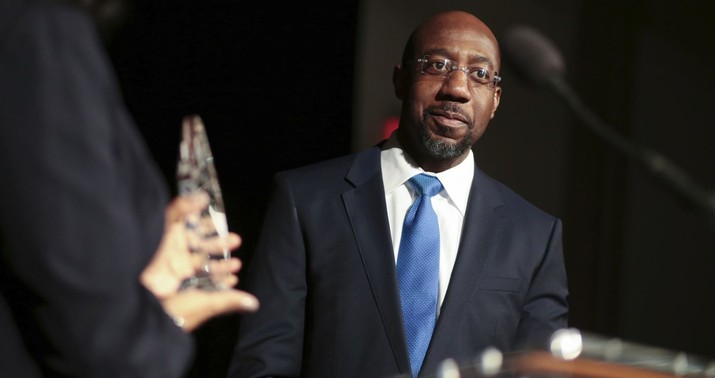 Memo to Georgia GOP: You might want to pace yourselves in the Raphael “Ralph” Warnock oppo drop.

Memo to Georgia Democrats: Are you sure they’re not pacing themselves? Or did anyone bother to vet their candidate for US Senate? Warnock’s ranting on Israel and Jeremiah Wright is one thing, but how do you miss an arrest in 2002 for obstructing a child-abuse investigation? Via Twitchy:

Two Baltimore ministers have been charged with obstructing a police investigation into suspected child abuse at a church-run camp in Carroll County.

The Revs. Raphael Gamalial Warnock, 33, and Mark Andre Wainwright, 30, of Douglas Memorial Community Church are accused in court documents of trying to prevent a state trooper from interviewing counselors at the church’s Camp Farthest Out in Eldersburg. …

The ministers interrupted a police interview of a counselor Wednesday in a room at the camp and, after investigators moved the interview to a nearby picnic area, interfered again and subsequently tried to prevent a camper from directing police to another potential witness, according to charging documents.

“I’ve never encountered resistance like that at all,” said Trooper Diane Barry of the state police Child and Sexual Assault Unit in Westminster. Barry said the counselors consented to the interviews after being told they were free to go at any time and were not obligated to answer her questions.

To be clear, neither minister was the target of the abuse claims. Can the obstruction charges be explained? Sure; neither minister was apparently convicted of the charges, and it may not have even come to trial. Warnock insisted to the Baltimore Sun at that time that they didn’t want police interviewing their congregants without their counsel present. They didn’t have any legal standing to interfere on that basis and that does amount to obstruction, but it’s also possible to make a civil-disobedience argument here too. Warnock and Wainwright can, and did, stand on constitutional principles outweighing their standing to intervene, and that might be a sellable argument.

Still, it’s more than passingly strange that pastors at the camp would interfere with a child-abuse investigation, especially at their own facility. And as Tom Cotton observed oh-so-quickly when this story emerged in the oppo drop, imagine if the party affiliations were reversed:

If a Republican helped run a camp for children that was investigated for child abuse—and then was arrested for trying to block the investigation—the media would be asking a lot of questions.

Far more interesting here is the fact that today is the first time we’re hearing about any of these Warnock issues. Did Democrats even bother to do any due diligence before lining up behind Warnock? It looks like they got caught with their pants down here, because even a simple Lexis-Nexis search would have turned this up already and given Democrats a chance to pre-empt any GOP attacks over it. They should have disclosed this in December as an example of Warnock putting himself on the line for his flock, standing up for poor people against the police, etc etc etc. This was a lot easier to explain than Warnock’s sermons too, which would be a PR challenge under any circumstances.

This looks like Democrats didn’t learn anything from previous Republican vetting failures — in the 2010 Tea Party primary choices, Todd Akin, and all the way to Roy Moore. They now have a situation where the GOP can define not just the one runoff election but both as a fight against radicals. This is a basic political-party function, especially in high-level races. How could they blow something this easy?