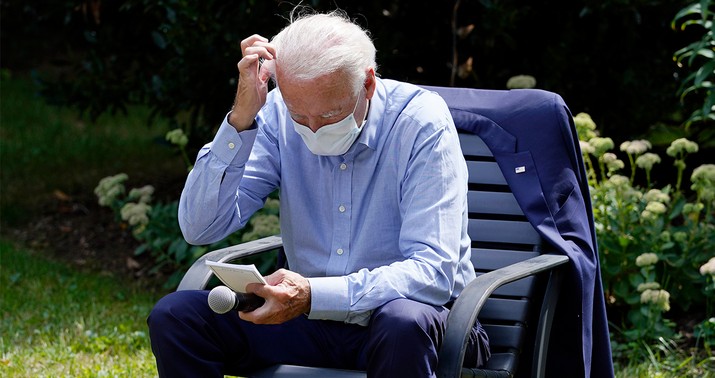 They don’t call it the Keystone State for nothing. Other than Florida, the most momentous swing state in the election tomorrow will be Pennsylvania, which went to Donald Trump in a 2016 surprise. That, along with excruciatingly close wins in Wisconsin and Michigan, flipped the Electoral College and sent Hillary Clinton into a shock defeat — so shocking, in fact, that Democrats spent the next four years refusing to accept the results.

Until today, media polling gave Joe Biden a small but significant lead in Pennsylvania. RCP’s aggregate average of all polls gives Biden a modest +4.3 advantage. Most pundits figured the state was out of reach for Trump, but the Washington Post reports today that Democrats in the state are starting to get déjà vu all over again:

Most Democrats still believe Biden will capture Pennsylvania, and he maintains a modest polling lead there, but their confidence has eroded in recent weeks with emerging signs of a tightening contest in the state, according to elected officials, strategists and party activists. Both sides believe the outcome in Pennsylvania will be crucial in determining who wins the White House.

The causes of Democrats’ anxiety are varied. They worry about potential trouble with mail-in ballots during a pandemic. They are concerned about the prospect of a voter surge in White, rural areas favorable to Trump and signs of lower-than-anticipated turnout among the Democratic base.

They are nervous about GOP efforts to place limits on voting. They cringe at the recent looting and violence in Philadelphia, which Trump has seized on to portray Biden as weak on crime and hostile to police. And they harbor lingering concerns about Biden’s muddled rhetoric on oil and gas, which has prompted inaccurate attacks that he advocates ending fracking.

“I am worried about Pennsylvania,” said Neil Oxman, a veteran Democratic strategist based in the state. Oxman cited several concerns, including the possibility that Trump’s base “will come out just a little bit stronger than our base.”

It’s tough to decide which of these anxieties will have the biggest impact, but not to identify the biggest self-inflicted problem. Mail-in ballots have a much higher rate of failure than in-person voting, thanks to multiple points of failure and no mechanisms for correcting them. The most basic is the voter him/herself: optical-scan ballots can be read to determine whether the ballot is spoiled before the voter leaves the precinct, allowing a second chance to effectively cast a ballot. Beyond that, mail-in balloting (even absentee balloting) requires more security and more handling, and each of those increases the chances of rendering a ballot invalid. On the relatively smaller scale of requested absentee ballots, those margins don’t usually have an impact. For states attempting to run their first mass mail-in ballot election, however, it’s going to be a very significant problem.

Democrats knew this full well at the beginning of the pandemic. If they didn’t, they should have learned their lesson in California’s first all-mail primary in March, in which at least two percent of the ballots got rejected. In New York’s mail-in primary in June, it was far worse — overall rejection rates were three percent or more, and in New York City got up to 20%. At that point, Democrats should have demanded in-person voting investment and warned their voters not to use mail-in balloting. Instead, they kept pressing for mail-in voting as a way to hammer Trump over his handling and weird quasi-denial of the scope and impact of COVID-19 pandemic.

Now they face a situation where 70% or so of their vote might come in by mail, where we can expect a rejection rate of two to five percent, against a majority of Republican votes cast in person with minuscule rejection rates. That won’t change anything in blowout states like California and New York, but in states where the margin could be less than two percent? You’d better believe that will be a problem, and not just in Pennsylvania but also in Michigan, Wisconsin, North Carolina, and so on.

That isn’t the only reason Democrats need to be nervous. The attacks on Biden’s fracking aren’t “inaccurate,” as the Post declares, and Pennsylvanians have seen the videos where Biden himself attacks fracking. The “surge” in rural voting is another issue, but Byron York thinks that Democrats are starting to see the 2016 phenomenon of the “hidden” Trump vote emerging once again … and not just among Republicans:

At the Trump events, it’s big, if mostly unspoken. At the Butler rally, Kori, from Freeport, said her sister and her father did not vote for Trump in 2016 but plan to vote for him this time. Dana, from Lower Burrell, said she knew people involved in the oil and gas industry who did not vote at all in 2016 but who plan to vote for Trump now. “Biden will shut us all down,” she said. “We’ll be out of work.” Van, from Canonsburg, was one of them. Also in the oil and gas business, he said he did not vote for 25 years. Now, after a few years of oil and gas prosperity, he said he will definitely vote for the president.

At the Ivanka Trump event — held in the middle of rolling farmland on a chilly afternoon — Barb, from Baden, Pennsylvania, said that back in 2016, “I didn’t even know my neighbors were Trump supporters until election night.” Shannon, who identified herself only as a Pennsylvania voter, said, “You don’t tell everyone you know that you support Trump. Seventy-five percent of the people I work with are against Trump. And it’s worse now [than in 2016]. A lot of people are afraid to speak up.” Added Laura, of Daisytown, “There are people who are fearful of losing their jobs if they support Trump.” …

“Look at the unions,” DeMarco continued. “When they endorse, they apply a lot of pressure on their guys to fall in line and support the candidate. That’s not happening now.” He mentioned a recent large oil and gas industry conference that included some local union leaders. “They said they’ve given up on trying to get their guys to vote Biden,” DeMarco recalled. “I can’t guess at the number, but if it’s in law enforcement, the building and trade unions, and oil and gas, these folks are voting Trump.”

When Trump pushed Biden into saying that he’d “transition from oil” in the final minute of the final debate, he knew what he was doing. That might have been the most significant statement in either debate, and perhaps in the general election itself. The Trump campaign should have spent much more time on the economic and foreign-policy implications of making America a net energy importer again rather than waste time on Hunter Biden, but voters certainly figured it out — especially in Pennsylvania.

There are plenty of reasons why Democrats should worry about Pennsylvania turning out differently than its polling suggests. Those same reasons apply in other battleground states too. It doesn’t mean that Trump will win, but it does mean that polling really might not tell the story in the election. Again.

Gun Rights Not Up For “Democracy”