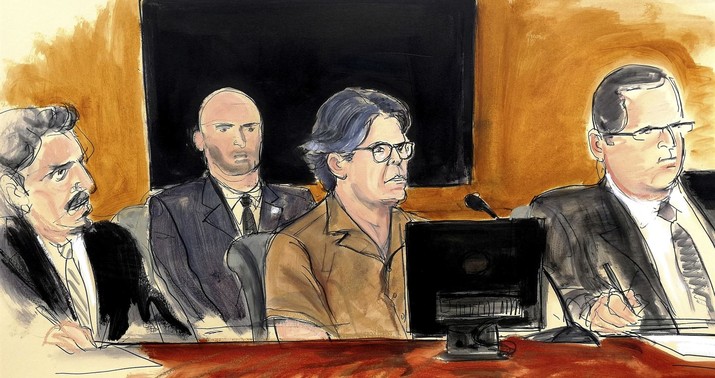 His victims wanted the court to impose a life sentence on “Vanguard.” The judge may have done them one better. Keith Raniere, leader of the NXIVM cult that extorted and literally branded some of the women who followed him, got a sentence of 120 years for sex trafficking and racketeering. Victims who waited sixteen months for his sentencing finally got their full vindication:

Disgraced self-improvement guru Keith Raniere, whose NXIVM followers included millionaires and Hollywood actors, was sentenced to 120 years on Tuesday for turning some adherents into sex slaves branded with his initials.

U.S. District Judge Nicholas Garaufis called Raniere “ruthless and unyielding” in crimes that were “particularly egregious” because he targeted girls and young women. He handed down the unusually high sentence in federal court in Brooklyn after hearing anguished statements by victims of a sex-trafficking conspiracy that resulted in Raniere’s conviction last year, along with unrepentant remarks from the defendant himself. …

Prosecutors had sought life in prison while defense lawyers said he should face 15 years behind bars.

The sentencing culminated several years of revelations about Raniere’s program, NXIVM, which charged thousands of dollars for invitation-only self improvement courses at its headquarters near Albany, New York, along with branches in Mexico and Canada. Adherents included millionaires and Hollywood actors willing to endure humiliation and pledge obedience to the defendant as part of his teachings.

This conviction took place in federal court, appropriately so considering the international scope of NXIVM. Raniere at one point in 2017 took off for Mexico, when federal investigators finally began looking into the reports of abuse, fraud, and extortion within NXIVM and its subsidiary DOS, the program under which women were trafficked to Raniere and branded with his initials. Reporters had begun raising questions about Raniere and his “Executive Success Program” as early as 2003, but the group’s extortion scheme apparently kept many potential witnesses silent.

Rolling Stone offered a fairly concise description of Raniere’s schemes last year, as part of a deeper dive into his depravity:

NXIVM was founded by Raniere and Nancy Salzman, a former registered nurse with schoolmarm glasses and a sensible haircut; he was called “Vanguard,” while she was known as “Prefect.” Recruits paid more than $7,500 for grueling, 12-hour “intensives” featuring NXIVM’s patented Executive Success Program (ESP) technology, a patchwork of various self-help programs, religious ideologies, and hypnosis techniques. They could also take classes through the smaller companies under the NXIVM umbrella: the Source, a workshop for actors led by [Allison] Mack; Delegates, a Task Rabbit-esque startup primarily staffed by younger, female members; and JNESS, a female empowerment group whose Facebook wall features Martin Luther King Jr. quotes juxtaposed against a pastel-pink template.

At the head of all of these companies was Raniere, 59, a self-proclaimed former-child-prodigy-turned-guru, who stood trial last summer on sex trafficking, racketeering, and racketeering conspiracy charges. Raniere was accused, among other things, of using NXIVM as a recruitment network for DOS, which prosecutors referred to as a secret “sex cult” within NXIVM. Mack and other female NXIVM members were the “masters,” while Raniere was the “grandmaster” at the head of the group, instructing women in DOS to recruit “slaves” for the purpose of his sexual pleasure. The branding Raniere described in the January 2016 conversation with Mack was part of the slaves’ initiation ritual.

The women recruited as DOS slaves, as they recounted on the stand, were told to give up “collateral” as the price of entry, such as videos of themselves masturbating or postmarked “confessions” that relatives or loved ones had sexually abused them. They were told to text their “masters” up-close photos of their unshaven vulvas, always keeping their faces in the shot so they were fully identifiable. They were told to stick to low-calorie diets, to wake up in the middle of the night to respond to “readiness drills” or texts from their “masters” or risk being paddled, and to abstain from sexual activity with anyone but Raniere. They talked about how they were instructed to buy BDSM sex toys as part of a “dungeon” to be built in the basement of DOS headquarters that would include cages, vibrating rubber paddles, and “puppy plugs … perfect for puppy play or naughty slaves.” (Plans for the dungeon were scrapped when the Feds started closing in.) Many, though not all of them, were branded, and they talked about how excruciatingly painful it was: how you could hear the cauterizing pen sizzle against raw skin, how one woman squealed and screamed so loud and so long that the women gave her a cloth to bite on.

If people and investigators averted their eyes prior to 2017, there’s no avoiding it now. HBO featured a documentary on NXIVM called The Vow, which I have not had access to watch, but we have begun watching India Oxenberg’s documentary series Seduced: Inside the NXIVM Cult on Starz. Only the first two episodes have aired yet, but it is a disturbing look at a cult that could have gotten a lot worse had Raniere not been stopped — or gotten much, much broader if Raniere had disciplined his sociopathic impulses more stringently. It’s impossible to ignore the similar elements between NXIVM and Scientology, as exposed in Leah Remini’s own documentary series on the latter topic for A&E. Raniere appears to have lifted some Scientology elements wholesale, right down to its Hollywood strategy and the common identification of critics as “suppressives” and the policies implemented toward them. The sexual sadism is all Raniere’s, however, and turned out to be his undoing.

Raniere and his remaining supporters hoped to convince the court to give him a more lenient sentence, arguing that his was an overall positive impact on society. The judge was having none of that, and at one point reacted angrily when Raniere’s attorney tried using a sob story to plead for mercy:

To this day, Mr. Raniere has many supporters who believe he was wrongfully convicted and insist that every activity in Nxivm was among consenting adults. Dozens wrote letters to the court urging leniency. …

After the victims’ statements, Mr. Raniere’s lawyer, Marc Agnifilo, argued that his client never intended to hurt any women, saying he was in love with them and simply had trouble dealing with breakups. In a stunning moment, Judge Garaufis interrupted Mr. Agnifilo in the middle of his speech, yelling, “No!”

During a back-and-forth in which the two men shouted through face masks, Judge Garaufis spoke forcefully about how intent did not matter when a 45-year-old man sexually abuses a child.

“It’s an insult to the intelligence of anyone who listens,” the judge said.

Clearly, that strategy didn’t work out too well for Raniere. Since this is a sentence in federal court, parole is not an option. Raniere can earn as many as 54 days off his sentence a year for good behavior, but 15% off of 120 years is still 102 years. His attorneys can work on sentence reductions on appeal, but given the breathtaking scope of his crimes and the depth of his depravity, Raniere had better not hold his breath for any kind of release.

Next up: the sentencing of Hollywood star Allison Mack, who pled guilty to racketeering and conspiracy in a plea deal in April 2019. Seagrams heiress Clare Bronfman got six-plus years on fraud and trafficking-related charges and agreed to pony up $6 million last month. She and her sister Sara face a number of lawsuits over the Bronfman’s alleged bankrolling and protection of Raniere, which means this case will go on for quite a while — and hopefully serve as a lesson to others. It will likely be a very long while before Mack gets in front of the cameras again … if ever.