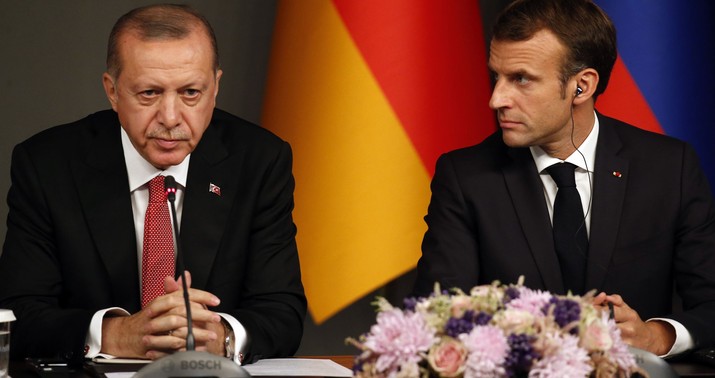 Well … someone needs a mental check, clearly. France has yanked its ambassador from Ankara after Turkey’s Recep Tayyip Erdogan declared that Emmanuel Macron requires a “mental check” for claiming that Islam is in crisis after the beheading of a French teacher in Paris last week. Erdogan also compared the plight of Muslims in Europe to that of the Jews in the 1930s and 1940s, claiming that France plans to “lynch” them.

Just another day in NATO, folks!

Ankara has been particularly incensed by a campaign championed by Macron to protect France’s secular values against radical Islam, a debate given fresh impetus by the murder of a teacher who showed his class a cartoon of the prophet Muhammad.

In an address on Friday, Erdoğan said: “What else can one say about a head of state who treats millions of members from different faith groups this way: first of all, have a mental check.

“What’s the problem of the individual called Macron with Islam and with the Muslims?” he asked.

“Macron needs mental treatment,” Erdoğan added, while indicating he did not expect the French leader to win a fresh mandate in the 2022 elections. He said: “You are constantly picking on Erdoğan. This will not earn you anything. There will be elections (in France) … We will see your (Macron’s) fate. I don’t think he has a long way to go. Why? He has not achieved anything for France and he should do for himself.”

And Erdogan seems eager to sell this victimology even to the point of ludicrousness:

The insidious policy of offensive cartoons, accusations of separatism against Muslims and raids on mosques had nothing to do with freedom of expression, Erdogan’s communications chief Fahrettin Altun said on Twitter. “This is about intimidating Muslims and reminding them that they are welcome to continue to make Europe’s economy work, but that they will never be a part of it, he added. He also argued that this attitude towards Muslims was “eerily familiar” and resembled “the demonisation of European Jews in the 1920s”.

That might make an easier sell if it weren’t for the fact that radicalized Islamists keep conducting terrorist attacks in Paris. There is a kernel of truth about the economic argument being made by Altun, but it’s in large part because the Muslims who emigrated to France — from Algeria, Syria, and other places — don’t want to assimilate into France’s secular culture rather than the other way around. That has created a stratification in French society which is already dangerous, especially in the banlieus, and which prompts secularist reactions that border on the absurd.

It’s also worth mentioning that anti-Semitism is rising in Europe, too. That is in no small part because of the influx of Muslims into the continent, but it’s not as if Europeans really needed that influx to vent their spleen at Jews, either. Still, it makes for a very strange argument from Erdogan, given the historical and contemporaneous circumstances. It’s not as if Turkey is a model for religious tolerance, especially under Erdogan. In fact, the latest report from the State Department’s US Commission on International Religious Freedom (USCIRF) puts Turkey on its special-watch list, and notes anti-Semitism from Erdogan’s administration as one of the particular concerns:

As in previous years, the government continued to unduly interfere in the internal affairs of religious communities by preventing the election of board members for non-Muslim foundations and introducing new limitations on the long-delayed election of the Armenian Apostolic Church’s patriarch. The Interior Ministry curtailed the candidacies of certain individuals in the latter election despite a May 2019 Constitutional Court ruling that prior acts of such state interference had violated religious freedom. Alevis, the country’s largest religious minority community, remained unable to gain official recognition for their gathering houses (cemevleri) as places of worship or to exempt their children from compulsory religious classes, despite European Court of Human Rights (ECtHR) rulings finding that these policies violated Alevis’ rights.

Religious minorities in Turkey expressed concerns that governmental rhetoric and policies contributed to an increasingly hostile environment and implicitly encouraged acts of societal aggression and violence. Government officials and politicians continued to propagate expressions of anti-Semitism and hate speech, and no progress was made during the year to repeal Turkey’s blasphemy law or to provide an alternative to mandatory military service and permit conscientious objection.

Erdogan should be a bit more careful, as it appears he’s running out of allies. Despite warming ties over the last couple of years with Moscow, Russia and Turkey find themselves on opposite sides in Syria and now Azerbaijan as well. Today, Russia threw a punch at Erdogan’s chin in Syria in what the New York Times suggested was a message to Turkey:

Russian war planes struck a camp of Turkish-backed rebel fighters in northwestern Syria on Monday, killing dozens of Syrian fighters as well as civilians harvesting olives nearby, according to a rebel spokesman, in the bloodiest surge in violence since a cease-fire came into effect seven months ago.

The strike targeted the group Faylaq al-Sham, whose base is near several refugee camps in the heavily populated province of Idlib. Several million people live in the province, many of them displaced from other parts of Syria by the country’s nine-year civil war. …

“Attacking the HQ of Faylaq al-Sham is nothing ordinary,” Omer Ozkizilcik, a researcher at SETA Foundation in the Turkish capital, Ankara, said in a Twitter post. “Turkey pays all Turkey-backed rebels in Idlib via Faylaq. The group is responsible for protecting the Turkish presence in Idlib and an essential part of the Turkish-Russian cease-fire agreement.”

A couple of years ago, it looked as though Turkey was falling into Vladimir Putin’s orbit. Now, however, it appears Erdogan is about to lose all of his allies while attempting to position himself as leader of the Sunnis, a laughably inept move considering the consolidation taking place among Sunni Arabs. At some point, NATO will have to reconsider Turkey’s strategic value as a member as compared to the strategic risks Erdogan keeps creating. Erdogan seems intent on re-enacting the same incompetence displayed in the last decades of the Ottoman Empire. Will another Mustapha Kemal arise to rescue the Turks from that collapse?

Addendum: As if on cue, Erdogan apparently decided that this was also a good time to spit in the US’ eye:

Speaking a day after he suggested Macron needed mental health treatment because of his views on Islam and radical Muslims, Erdogan expanded his range to take aim at foreign critics.

“Whatever your sanctions are, don’t be late,” Erdogan said, referring to U.S. warnings for Turkey not to get directly involved in the conflict over Nagorno-Karabakh, where Ankara supports Azerbaijan against ethnic Armenian forces. …

“We stepped in for the F-35, you threatened us,” Erdogan told a televised ruling party congress in the eastern city of Malatya. “You said, ‘Send the S-400s back to Russia.’ We are not a tribal state. We are Turkey.”

They didn’t get the F-35s because Erdogan chose to use the Russian missile system which the plane’s designers intended to avoid. That was Erdogan’s decision despite being warned repeatedly that NATO could not allow that kind of compromise to the fighter platform. Erdogan’s controlling party might get enthusiastic about this kind of rhetoric, but Turks in general might not be too happy to end up alone on the world stage.