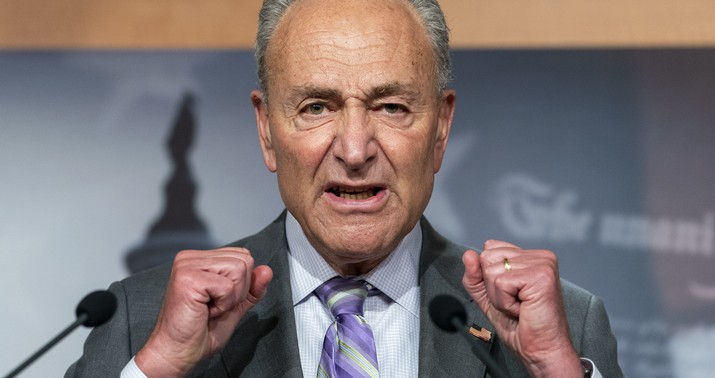 By about 9 pm ET, give or take a procedural motion or so, Amy Coney Barrett should get confirmed as the next Supreme Court justice. As it stands at the moment, Democrats can no longer offer any roadblocks to the final floor vote, having lost an attempt to filibuster yesterday. That started the clock ticking on thirty hours of debate, which will change no one’s mind at all, and on a likely 52-vote confirmation of Barrett — if everyone shows.

Just in case two or more Republicans can’t make it to the vote, however, Mike Pence plans to come back to Washington for the vote. The VP will spend today in Hibbing, Minnesota to campaign for re-election but fly back immediately afterward. Let’s just say that Democrats aren’t rolling out the welcome mat, although in this case their lack of hospitality is understandable:

A deeply torn Senate is set to confirm Amy Coney Barrett to the Supreme Court, but Democratic leaders are asking Vice President Mike Pence to stay away from presiding over Monday’s session due to potential health risks after his aides tested positive for COVID-19. …

Democrats said in a letter to Pence on it’s “not a risk worth taking,” according to copy obtained by The Associated Press.

Senate Democratic leader Chuck Schumer and his leadership team wrote that not only would Pence’s presence violate Centers for Disease Control and Prevention guidelines, “it also be a violation of common decency and courtesy.”

Under the Constitution, the vice president serves as the largely ceremonial role of Senate president and can break a tie vote. Pence’s vote isn’t expected to be needed. Senate Republicans control the chamber and steered their majority to seize the opportunity to install a third Trump justice, securing a conservative court majority for the foreseeable future.

“Nothing about your presence in the Senate tomorrow can be considered essential,” the Democrats wrote. They warned of the risk not just to senators but the police, restaurant workers and others who keep the Capitol running.

This is actually quite a fair point. According to CDC guidelines, anyone with a close-contact positive should quarantine for fourteen days after notification. They do make exceptions for “critical infrastructure” workers, which includes government officials, but they have to mask up and maintain social distancing, and of course limit themselves to the critical infrastructure work.

Mike Pence now falls into that category, thanks to the latest outbreak in his inner circle:

The presidential campaign was roiled this weekend by a fresh outbreak of the novel coronavirus at the White House that infected at least five aides or advisers to Vice President Pence, a spread that President Trump’s top staffer acknowledged Sunday he had tried to avoid disclosing to the public.

With the election a little over a week away, the new White House outbreak spotlighted the administration’s failure to contain the pandemic as hospitalizations surge across much of the United States and daily new cases hit all-time highs.

The outbreak around Pence, who chairs the White House’s coronavirus task force, undermines the argument Trump has been making to voters that the country is “rounding the turn,” as the president put it at a rally Sunday in New Hampshire.

It doesn’t help that the White House has played fast and loose with CDC recommendations in the past, on masks and social distancing. The resurgence of cases was inevitable in the case of a virus as novel and transmissible as COVID-19, but the hope was to delay it long enough to get vaccines and therapeutics in place. We do have the latter, but with hospitalizations increasing again, it’s not clear whether we will have the supply yet to match the demand. The second such outbreak at the White House in as many months may also have been inevitable, but it’s going to look like it’s connected to the cavalier attitude toward masking and distancing that the administration exhibited for months.

Under these circumstances, the bigger question is why Pence is going to Hibbing or anywhere else in person. He has tested negative so far, but that isn’t determinative in the first few days after a potential exposure — hence the quarantine recommendation. Campaigning might be strategically necessary for re-election, but it’s a big stretch to call it “critical infrastructure,” especially when Pence could conduct a “virtual” event in its place. If this was you or me with a close-contact positive, we wouldn’t be going to Hibbing even if you or I lived in Hibbing.

However, one can certainly make the argument that Pence’s role in the Senate qualifies as “critical infrastructure.” A tie in the Senate would stall business and create all sorts of uncertainties on Barrett’s status, which is precisely why the Constitution assigns the VP the role as president of the Senate. Other than being a heartbeat away from the presidency, it’s the only critical role the VP has.

Democrats do have one option to keep Pence from exercising that role. They can make sure there is no tie for Pence to break. That’s almost certain to be the case anyway, but if a couple of Republicans are suddenly unable to continue on the floor, Chuck Schumer can send off a couple of his caucus members to balance out the final vote. If he’s not willing to do that, then Schumer must not be as concerned about the health of the upper chamber and its workers as he is about trying to keep Barrett from her confirmation.

That’s good news, but it’s still not dispositive against potential infection, which typically takes a few days to show up in testing. And there is some indication that Pence might be rethinking his Senate appearance:

Update to this — chief of staff Mark Meadows told reporters reporters Pence's attendance is "in flux."

“I think that was in flux — I know there's been reports of that, but I'm not sure what the Vice President’s plans are for the Senate tonight." https://t.co/rbEUktsweT

It probably won’t be necessary, but Pence should be on standby anyway.

Update: The vote should now wrap up around 8 pm ET, according to Kevin Corke. I’d leave some slack time in those calculations, however.