WaPo: Did anyone notice the dog that barely barked in Day 1 of Barrett’s confirmation hearing? 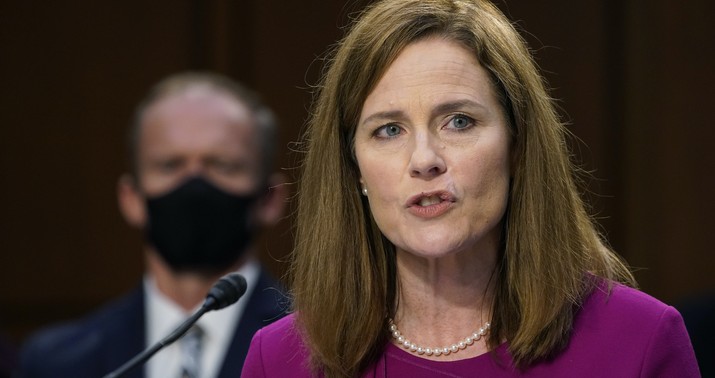 Better question: Did anyone stay awake long enough in the hearing to notice anything other than Ben Sasse’s civics lesson? And will anyone tune in to a hearing today that became more of a confirmation debate on the 2020 election? Amy Coney Barrett returned to the Senate Judiciary Committee this morning at 9 am ET to answer questions rather than just listen to speeches from the members, but there seems to be less interest in her than in flogging Donald Trump — or supporting him, depending on the member.

At times, as the editors of the Washington Examiner observe today, it seemed like Senate Democrats wanted to talk about “everything except Amy Coney Barrett”:

Evidently, polling showed Democrats that their scorched-earth tactics against Brett Kavanaugh backfired in the 2018 Senate races. And they got the memo that the attacks on Barrett’s religious beliefs that they deployed during her appellate court confirmation hearings were likely to go over about as well as a Yankees parade in South Boston. Furthermore, they cannot question the credentials of Barrett, who is widely respected by lawyers regardless of their ideology and earned the American Bar Association’s highest “well qualified” rating.

As a result, Democrats have decided to use the hearings as another platform for their 2020 campaign. Their opening statements were treated simply as another forum for peddling predictable attacks on President Trump and on his administration’s handling of the COVID-19 pandemic. But more than anything, Democrats talked about threats to Obamacare and individuals with preexisting conditions. …

Democrats clearly see Barrett’s confirmation as a fait accompli. Without the ability to stop it or make a compelling argument for why she lacks the qualifications to be on the Supreme Court, they are clearly attempting to turn the hearings into a campaign rally.

That’s clearly the strategy, and in part because Senate Democrats don’t have many options in this process. Republicans didn’t leave them enough time to dig up any new dirt on Barrett, and their first attempt to demonize her blew up in their faces in 2017. Yesterday, I argued that Democrats were essentially making lemonades out of the lemon in their hands by holding a four-day campaign rally in the guise of (or in lieu of) an actual confirmation hearing. Republicans will confirm Barrett anyway, so why waste this opportunity to get the messaging out to the national audience tuning into the hearings?

Not everyone agrees with that strategy, however. Washington Post analyst Aaron Blake argues that Senate Republicans buffaloed Democrats into backing off against Barrett — so much so that they barely even mentioned the one issue that fuels their radical obstruction on GOP-appointed judges:

Some Democrats did invoke Roe in their opening statements Monday, but the number of mentions paled in comparison to Obamacare. Similarly Sen. Kamala D. Harris (D-Calif.), a Judiciary Committee member and the Democrats’ vice-presidential nominee, focused her criticisms of Barrett at last week’s vice-presidential debate on the Affordable Care Act, while punting on a question about Roe. …

To be clear, a judicial nominee’s views on the role of his or her religion in their legal rulings is valid. Contrary to the arguments made by some of Barrett’s GOP allies both Monday and previously, that isn’t inherently an attack on religion or an unconstitutional religious test — to the extent the nominee actually views their religion impacting those decisions. Even Republicans in the same 2017 hearing raised this issue, pointing to Barrett in the past writing that Catholic judges were “morally precluded from enforcing the death penalty.”

But there’s a right and a wrong way to go about it. And Democrats effectively did their best to take this issue off the table in a future Barrett hearing when the stakes, as we’re now finding, could be much higher. And there’s no better reflection of that reality than in their skittishness to go down the road of even raising abortion and Roe v. Wade at these hearings — a clear acknowledgment that it could seep into issues of religion, on which they’re very apparently not confident in how that might pan out.

That, though, is a pretty remarkable concession. Here is a potential justice that could, by just about all accounts, have a significant impact on rolling back abortion rights on a 6-3 conservative court, even if she doesn’t necessarily provide a vote to overturn Roe. And Democrats aren’t even going to focus their case against her on that? Despite overturning Roe polling very poorly?

It’s a stunning concession, one that didn’t get a lot of attention, as usually happens with non-barking dogs. However, there may be a good reason for that in this instance, borne out by the futility of opposing Barrett’s confirmation. There is little point now in raising Roe, given the inevitability of Barrett’s success in gaining the Supreme Court seat. In fact, the more Democrats mention Roe, the more that abortion-rights advocates will recognize Democrats’ impotence — which they largely created themselves in 2013 and their precedent-shattering (and comity-shattering) “nuclear option.” In that sense, every mention of Roe is a thorn in the side of the pro-abortion voters who are already firmly in their grasp. Why demotivate them by beating a dead horse?

Instead, Democrats are making a tactical choice to use this platform to reach voters they can woo on health care. That’s also an argument based on nonsense, as Democrats keep falsely accusing Barrett of having argued to overturn ObamaCare when she did no such thing. But that’s a better position to put forward, especially after Republicans allowed them a platform three weeks ahead of a national election. Whether Barrett makes it to the court or not, health care is a policy that will definitely be in play in the next administration one way or the other. This is another way of making this confirmation hearing a tribune on Trump rather than a futile effort to stop the inevitable.

On the other hand, it’s coming up already this morning, thanks to Dianne Feinstein:

Barrett declines to say whether she agrees with Scalia that SCOTUS abortion cases have been wrongly decided:

But adds: "I have no agenda to overrule Casey."

We’ll have more on this later, to be sure.