McEnany: I *just* found out I’m COVID-19 positive too 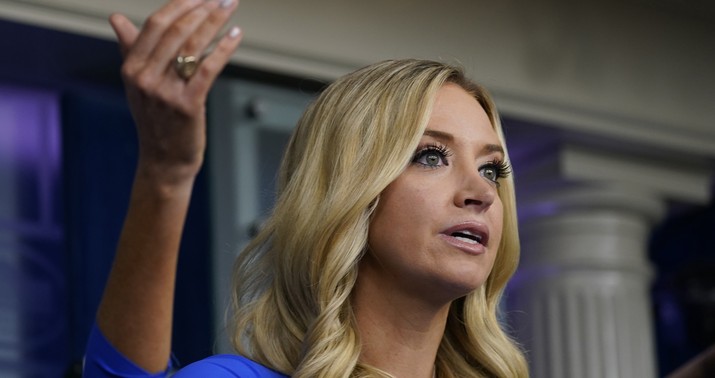 The timing matters here, for more than one reason. Kayleigh McEnany announced she would begin quarantining today after testing positive for COVID-19 — and insisting that she had no knowledge of Hope Hicks’ positive test before the most recent White House press briefing:

Note the emphasis on McEnany’s knowledge of Hicks’ status. That comes in answer to criticism she has received, including from the Morning Joe crew on Friday, for continuing to conduct business with reporters at the White House. Media figures are fuming over the risks as at least four members of the White House press corps have now been diagnosed positive for COVID-19 (the fourth was announced earlier this morning). After all of the events at the White House the past week and the sudden spike in positive test results, one can understand why they’re a little sensitive about this topic at the moment:

“That’s an important moment because it raised eyebrows at the time that he travelled with, this is before we knew anything about Hope Hicks, he travelled with a smaller party than usual yesterday to New Jersey,” Lemire said, “and Kayleigh McEnany, who we were told was slated to travel with him did not. Instead, one of the deputy press secretaries did. Kayleigh McEnany was, we have now learned, notified of Hope Hicks’ positive diagnoses yesterday [Thursday — Ed] and later in the day still held a briefing with White House reporters, and, of course, she was not wearing a mask.”

“Good lord,” Scarborough said. “Are you kidding me?”

“Wait,” Scarborough said. “She knew before that press conference where she didn’t wear a mask, in front of all of those reporters and had heated exchanges with Fox News reporters?”

“Screaming about the river,” Brzezinski added.

“She knew that she had been exposed to this disease, and went out and still had a press conference in front of members of the press?” Scarborough said.

Lemire agreed that may have happened, although subsequent reporting showed McEnany did not know about Hicks’ positive test until shortly before the news broke Thursday evening.

Had she known about Hicks’ illness before Thursday’s afternoon briefing, that would have been hard to excuse. However, it seems very unlikely that McEnany would have been contagious on Thursday but only registering positive today, or that she rather than other officials who registered positive last week was the nexus of contagion in the WH press corps. And if she didn’t know about Hicks’ illness until the evening, then it’s a moot point anyway.

Besides, how close is the podium in the briefing room to the front row? It has to be at least six feet away, and the same reporters were wearing masks themselves. It would be better if everyone was masked up, but even the doctors who brief the press in the same room are usually maskless while on the dais.

The problem in this situation is that the American public doesn’t trust anyone in this crisis. Our pal Philip Klein succinctly summed up the institutional moment:

The truth is that this virus will make its way through the population eventually, regardless of what roadblocks we put up. Masks and social distancing can slow down that transmission rate and reduce viral loads to produce asymptomatic or low-symptom cases, which is why those strategies are so vital until we have an effective and widely available vaccine. Even with those, a virus is going to do what a virus is going to do, and any expectations that it will just “go away” (as the White House and Trump suggested early on) are ridiculous fantasy at this point. If all sides would accept that truth and operate realistically in fighting this pandemic rather than using it to score points, we’d all be better off.