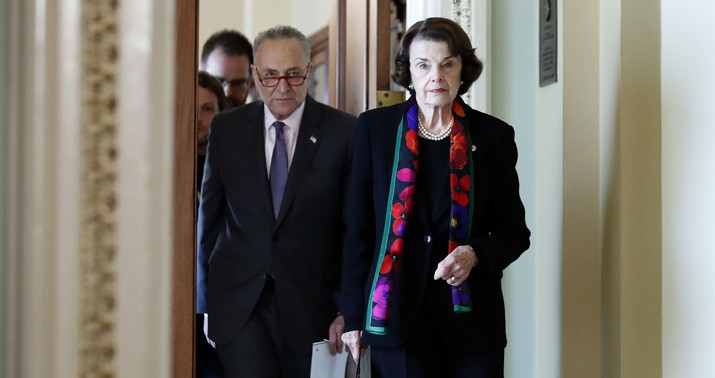 Actually, it doesn’t — and both Chuck Schumer and Dianne Feinstein can thank Nancy Pelosi in part for that. After the news about positive COVID-19 diagnoses for Donald Trump and especially Mike Lee, who sits on the Senate Judiciary Committee, the two Senate Democrat leaders insisted on canceling the upcoming confirmation hearing for Amy Coney Barrett.

It doesn’t help this case that both of them have demanded it be canceled pretty much every day since her nomination, too:

Schumer/Feinstein: The unfortunate news about the infection of our colleague Senator Mike Lee makes even more clear that health and safety must guide the schedule for all Senate activities, including hearings.

Schumer/Feinstein: It’s critical that Chairman Graham put the health of senators, the nominee, and staff first – and ensure a full and fair hearing that is not rushed, not truncated, and not virtual.  Otherwise this already illegitimate process will become a dangerous one.

This is a silly argument for a couple of reasons. First, Trump’s diagnosis has no bearing at all, since his constitutional role ended on Sunday with the official transmission of Barrett’s formal nomination. Second no one seems to be demanding an end to the Senate session, at least for the moment, despite Lee’s diagnosis. Schumer will probably demand later today that Mitch McConnell take up the House HEROES Act on COVID-19 relief, perhaps even citing these diagnoses for necessity. The proximity of senators to each other on the chamber floor is closer than in committee hearings.

There’s at least a little time before the hearing, too. Lee announced that he would quarantine for ten days, starting today, which would conveniently leave him available for the confirmation hearing on October 12. Other committee members who were around Lee yesterday might want to quarantine longer, but that wouldn’t prevent the Senate from holding the hearing. Thanks in part to Pelosi’s insistence on conducting congressional business remotely, committees in both chambers have met in whole or in part virtually — including the Senate Judiciary Committee, which just met with James Comey via teleconference for his testimony. And that hearing dealt with sensitive intel and nat-sec issues, too.

This is nothing more than yet another excuse to demand an end to a legitimate nomination and confirmation process. Mitch McConnell declared “full steam ahead,” as did Judiciary chair Lindsey Graham:

Just finished a great phone call with @POTUS. He’s in good spirits and we talked business — especially how impressed Senators are with the qualifications of Judge Barrett. Full steam ahead with the fair, thorough, timely process that the nominee, the Court, & the country deserve.

Talked to Senator Lee earlier today and wished him a speedy recovery.

Look forward to welcoming him back to the @senjudiciary to proceed with the nomination of Judge Amy Coney Barret on October 12. https://t.co/OVm0OQbnQF

Out of caution, Graham could hold the confirmation hearing over Zoom, or whatever platform Congress is using for these committee meetings. The committee members can meet with Barrett the same way, or talk over the phone, and do their research remotely or through their staffs. But if Judiciary Democrats still don’t want to do that, then Graham should hold a vote immediately and report the nomination to the full Senate.