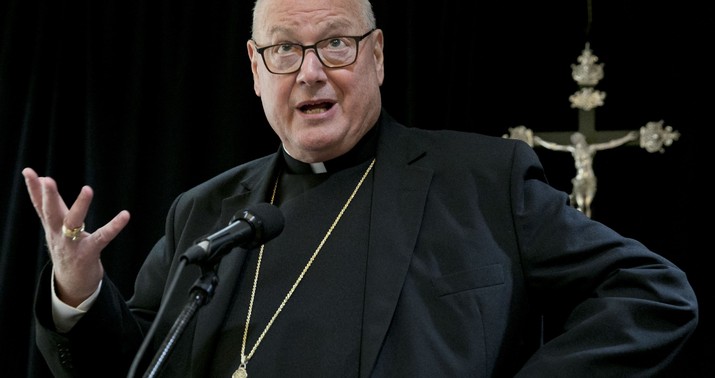 What makes this episcopal throat-clearing notable is its source. Cardinal Timothy Dolan has good relations with politicians across the political spectrum and tries his best to foster bipartisanship and comity in tone, at least — as one should expect from faith leaders. That has its limits, however, and for Dolan that limit was exceeded in the 2017 confirmation hearing of Amy Coney Barrett. “There should be no religious tests for candidates,” Dolan noted on his SiriusXM show earlier today, and complained about attacks by Senate Democrats on Barrett’s Catholic faith during that process.

“There were some really nasty comments,” Dolan recalls, and suggests that the Senate just avoid the “tawdry nastiness” will not come up again this time. Or else?

Cardinal Timothy Dolan raved about Judge Amy Coney Barrett’s credentials to serve on the US Supreme Court — and warned that her deep Catholic faith should be respected, not attacked, during confirmation hearings.

“She takes her Catholic faith seriously, but that is not why she was nominated as a justice to the Supreme Court, is it? I think she is nominated because she is the best candidate around,” Dolan said on his SiriusXM show “Conversation with Cardinal Dolan.” …

Dolan complained that Barrett was mistreated during her prior confirmation hearing to become a federal appellate judge, saying some senators “were testing her on her faith.”

“That’s just out of bounds, folks,” he said.

Furthermore. Dolan notes that another woman who made her faith central to her life didn’t receive any such scrutiny over it, either at that time or any other time:

“What I admired in the accolades to Ruth Bader Ginsburg, there were a lot of articles about her deep Jewish faith and how she was not afraid to say that the values of her Jewish faith animated how she lived, and how she judged,” Dolan said. “Nobody found that controversial.

“She always said she faced three biases; a woman, a mother and a Jew. Well, it seems like what Judge Barrett is facing: woman, mother and Catholic.”

We know the reason for that lack of scrutiny — abortion. Catholicism was just a stalking horse for Democrats to paint Barrett as weird and dangerous. At first it appeared that progressives were clearing the ground for a repeat, especially in the media, where hyperbolic rehashes of People of Praise and Barrett’s views on faith in the public square have been percolating ever since Ginsburg’s death. Thus far, Senate Democrats haven’t taken the bait, but that doesn’t mean they won’t when the issue becomes acute in the confirmation hearing. Their progressive base wants Barrett torn to pieces and will be very unhappy if Barrett instead gets the kind of hearing that Dolan suggests on his show today — focused on her character and qualifications.

Dolan sets his expectations pretty clearly on that point too, although he doesn’t formally endorse Barrett:

Dolan said he did not know Barrett personally but was “proud” of her. He said people he’s spoken to who know Barrett well “sparkle about her.”

“Is she erudite? Is she articulate? Is she a woman of integrity, strength and independence? They all rave about her character,” he said.

Whether or not Dolan intended it to be a warning, it clearly sends a signal to Senate Democrats and to the Biden campaign. They’re hoping to peel off Catholic voters from Trump in a big way this time around, but that will be tough to do if they start provoking Catholic leadership with Know-Nothingism arguments over supposed “fundamental conflict[s]” between public service and Catholicism. Can they resist that urge? Joe Biden’s mild response in last night’s debate sends a similar signal — ixnay on atholic-Cay ashing-bay.

Oreo Insulted Its Customers In An Attempt to Get Woke Points, but There's a Larger Problem

“‘Kill the Nazi!’ someone screamed.”