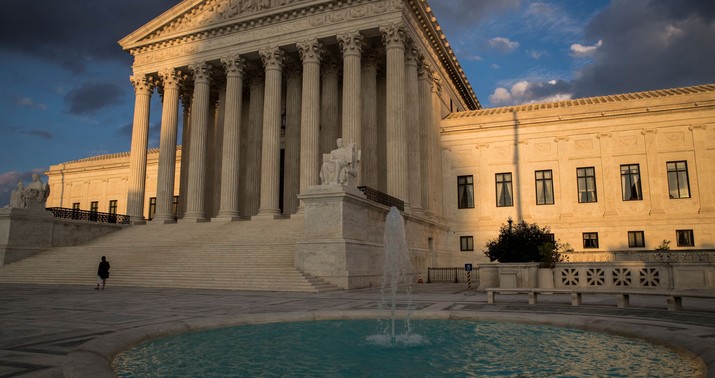 At almost any other moment, this topic could have been well received, or at least some consideration. At this particular moment, though, it carries an unmistakable aroma of sour grapes. With conservatives about to solidify a six-seat majority on the Supreme Court, suddenly House Democrats want to talk term limits on the justices, and appointment limits for presidential terms:

Democrats in of the House of Representatives will introduce a bill next week to limit the tenure of U.S. Supreme Court justices to 18 years from current lifetime appointments, in a bid to reduce partisan warring over vacancies and preserve the court’s legitimacy.

The new bill, seen by Reuters, would allow every president to nominate two justices per four-year term and comes amid heightened political tensions as Republican President Donald Trump prepares to announce his third pick for the Supreme Court after the death on Sept. 18 of Justice Ruth Bader Ginsburg, with just 40 days to go until the Nov. 3 election.

“It would save the country a lot of agony and help lower the temperature over fights for the court that go to the fault lines of cultural issues and is one of the primary things tearing at our social fabric,” said California U.S. Representative Ro Khanna, who plans to introduce the legislation on Tuesday, along with Representatives Joe Kennedy III of Massachusetts and Don Beyer of Virginia.

The bill does have its selling points. For one, it would not apply to any of the current justices at the time of passage, which means it won’t change the tilt of the court for a number of years. It also rotates term-limited justices back to appellate courts (or district courts) to avoid a constitutional challenge over the Article III language that allows judges to “hold their offices during Good Behaviour.” The Supreme Court — and pretty much everyone else — interprets that as mandating lifetime appointments except if impeached and removed by Congress. This bill stretches the term “offices” to cover the idea of rotation off the top bench; in essence it guarantees lifetime appointments and income rather than the office itself.

That would be one problem with the bill, which would get challenged immediately. The other problem is who would hear the challenge, which would be … every judge who wants to end up on the Supreme Court, and eventually the big nine themselves. The only way to truly change the nature of the job would be to amend the Constitution, a process beyond the reach of the court.

In a political vacuum, that kind of constitutional amendment might actually succeed. Both sides complain about the decades-long grip on the office, albeit for somewhat different reasons. State legislatures might be inclined to see more accessibility in the office, or at least fresher minds. Lifetime appointments tend to rankle anyway with their inherent lack of accountability, although nothing in this proposal actually imposes accountability either.

But we don’t live in a political vacuum. It seems awfully interesting that Democrats only proposed this when it became clear that progressives had lost any shot at a majority on the court with Ginsburg’s passing. And as far as the “temperature over fights for the court,” Republicans will bitterly recall that Democrats began raising that temperature with the Robert Bork and Clarence Thomas hearings, and then started the judiciary wars in earnest starting in 2002. In fact, Mitch McConnell spent a few minutes on Wednesday reminding everyone of those facts.

Even that misses the point a bit, though. The real reason that the Supreme Court has become such a prize is its history of activism that greatly expanded federal power, such as Wickard v Filburn and other such distortions of otherwise-clear constitutional limitations on jurisdiction. Previous SCOTUS panels set precedents for “interpreting” laws and rewriting statutes that set expectations of it to perform as a super-legislature. That impulse goes all the way back to Woodrow Wilson, and got supercharged by Franklin Roosevelt and his attempt to bludgeon the court into submission to the executive branch. Until we get jurists on the Supreme Court who will revert the approach back to the court’s earlier and constitutional role, term limits are essentially meaningless.

And since Republicans seem to be at least somewhat less inclined to appoint judicial activists, I’d say let them serve for a while and see what happens. If those appointees won’t correct the course on jurisdiction and judicial activism, then perhaps a constitutional amendment addressing those issues specifically makes more sense.