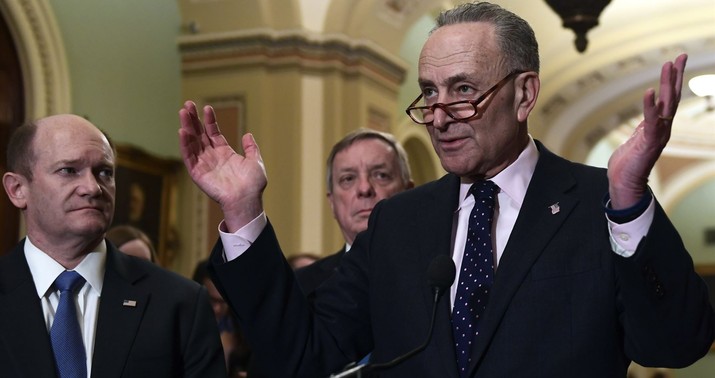 Roll over Dick Durbin, and tell Chuck Schumer the news. Senate Democrats have begun blanching at demands to burn down both the Senate — what’s left of it, anyway — and the Supreme Court if Donald Trump and Senate Republicans fill the seat left empty by the death of Ruth Bader Ginsburg, The Hill reports. It turns out that there actually is an end to the craziness Democrats will vent … at least this close to an election:

Senate Democrats are tamping down talk of expanding the Supreme Court if Republicans fill the seat held by the late Justice Ruth Bader Ginsburg.

Progressive activists and some lawmakers have raised the idea since Ginsburg’s death was announced on Friday night, arguing the party needs to be ready to take bold steps if they have the Senate majority and the White House next year while facing a 6-3 conservative court.

The effort would tie together two controversial ideas: nixing the 60-vote legislative filibuster and then passing legislation to add seats to the Supreme Court, which has been set at nine justices since 1869. But several Democratic senators, including senior members of the caucus, are shooting down the idea altogether or warning that debating it now is a distraction from the fight over Ginsburg’s seat.

Sen. Dianne Feinstein (D-Calif.), who would chair the Senate Judiciary Committee if Democrats win back the majority, is against nixing the legislative filibuster, which would be a necessary first step to adding seats to the court.

The first step has to be killing the legislative filibuster. Democrats might be optimistic about their chances in the Senate this election, but they’re not going to get to 60 seats. It would require legislation to add seats to the Supreme Court, whose current configuration is set in statute. There wouldn’t be a single Republican in the Senate that would go along with a court-packing exercise, so as long as the filibuster lives, court-packing dies.

Feinstein told reporters that it’s not just the first step to which she objects. She claims that no one in the caucus is actually talking about packing the court, even though Schumer warned that “nothing was off the table” if Trump and Mitch McConnell wen ahead with confirming a SCOTUS nominee. Dick Durbin complained yesterday that McConnell had turned the tables on Democrats with that argument, and that Democrats should focus on the nominee first:

“You’ll notice it’s the arguments being used by Sen. McConnell on the floor now. We have all these threats of changes in the future if we go ahead with this filling this vacancy. I think we ought to focus on the nominee, that nominee’s beliefs, and what they’re likely to do on the court in the context of the Affordable Care Act,” Durbin said.

There are a couple of translations for that. First, it’s an acknowledgment that Democrats overplayed their hand with their shrieking hysteria over what is a normal constitutional process. They’d hoped to bully Republicans into agreeing to keep Ginsburg’s seat in the hands of progressives. That backfired, especially when Democrats from Joe Biden on down couldn’t come up with a better reason for the illegitimacy of the process except rhetorical hypocrisy. Senate Republicans called that bluff — and McConnell made them eat it on the Senate floor — which ended any leverage they might have had.

That doesn’t mean they’re out of moves. Durbin’s comment also signals open season on the eventual nominee. Consider it the Kavanaugh Signal — an alert that Senate Democrats are looking for anything they can use to beat up Trump’s choice. They flopped at trying to make the process look illegitimate. Their next step is to make the nominee look illegitimate.

Perhaps that beats making themselves look illegitimate, which was the effect from the last few days. But that Plan B has its risks too, in turning off women and moderates (and maybe Catholics if Amy Coney Barrett gets the nod) right before the election with vicious personal attacks on Trump’s nominee.By raising expectations of a war, though, they may turn off their radical-progressive wing by failing to stop Trump. Such are the wages of shrieking hysteria.