More CBS/YouGov: “Law and order” looks like a winning message in 2020 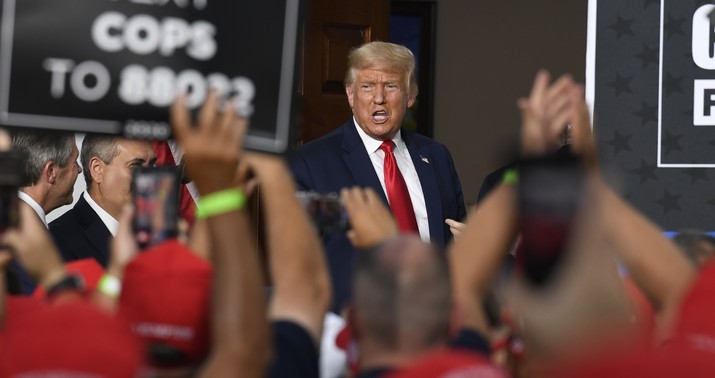 This didn’t get a mention in the CBS News report on its polling with YouGov, but it certainly seems critical for the political moment. With protests and riots roiling American cities, the issue of policing has become front and center in the 2020 election at all levels. Donald Trump wants to make “law and order” the central message of his campaign, betting on Americans to take the side of public safety and law enforcement over lawlessness and chaos in the streets.

Is that a good bet? The poll does show a significant amount of nuance on that issue — at least when it comes to protests and Trump. The president only gets a 44/56 rating on how he’s handled the protests, with 47% strongly disapproving and only 26% strongly approving. A 47% plurality think Trump is encouraging fighting rather than trying to calm the situation (39%). Those numbers get reversed for Joe Biden, with a 51/45 approval rating on the protests and a 49/30 plurality for trying to calm the situation.

That in itself doesn’t look good. It’s the later numbers that indicate that Trump’s on the right side, even if he’s not finding the right message yet. For instance, when asked to describe what protesters are trying to do in Portland and Kenosha, the non-exclusive answers show considerable skepticism about their aim. A slight majority thinks they want to destroy property, and a substantial number think they’re watching a revolution rather than a protest:

Seventy-five percent of respondents “personally identify” with the police? That number shows a very broad base of support, and rather surprising given all of the soft media coverage of their critics and protesters. The demos on this question are very, very interesting too:

In fact, the only demo to dip negative on police are 18-29 year olds, with a 48/52 — essentially an even split within a demo margin of error. They are also among the few who “personally identify” with protesters and groups from the political left (58/42), which score 41/59 overall. Liberals (77/23), Democrats (65/35), and black voters (56/44) also score them positively, but they get poor marks among both men and women (41/59 for both demos), majority opposition in every other age group, 37/63 among independents, and 41/59 among Hispanics, who seem very much not on board with police retreats.

All of this tells us that supporting police and making a law-and-order message a priority should be a no-brainer for this election, and not just at the presidential level. There is some sympathy for police reform — sixty percent believe that reforms are necessary to end the protests — but little sympathy for the people creating chaos and destruction in the cities. If Trump and his team can find a way to fine-tune their messaging, this might be a significant entrée to expanding their support among Hispanic voters — and maybe even among African-Americans left stuck in the chaos.

CIVICS FAIL: Don Lemon's call to 'blow up the entire system' was even too much for his CNN colleague Chris Cuomo