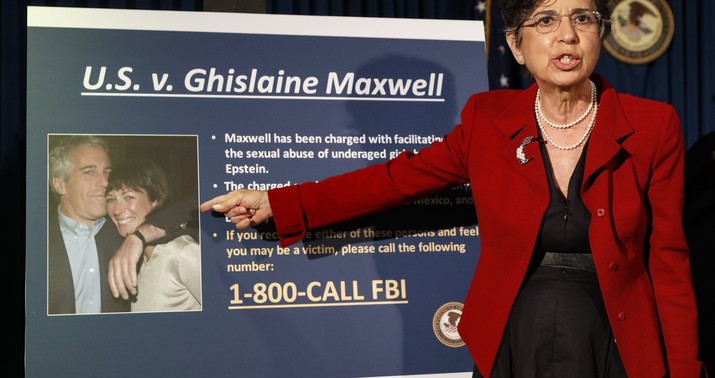 Doesn’t this seem a little … counterintuitive? When FBI agents swooped in and arrested Ghislaine Maxwell in a raid last month, people openly wondered how long a jet-setting accused abuser of underage girls would survive if put among all the other inmates. Yesterday, however, Maxwell’s attorneys demanded that prison officials take her from their suicide-watch status and heightened supervision, and put into the general population.

The letter, obtained by Fox News, claims that Maxwell has been “treated less favorably than a typical pretrial detainee,” which they assume is the result of Jeffery Epstein’s “apparent suicide attempt” in July 2019. The letter also claims that Maxwell has been “subject to suicide watch protocols” that include being “woken up every few hours during the night and being forced to wear special clothing.”

The lawyers point out that their client has never been a risk for suicide but has been kept out of the general population for 36 days.

Maxwell has been in custody for over a month and has been “held under uniquely onerous conditions,” the letter read. She is surveilled 24 hours a day by security cameras that are viewed by both “multiple prison guards, many of whom do not appear to be regular MDC personnel.”

“These prison guards constantly observe Ms. Maxwell and take notes on her every activity, including her phone conversations with defense counsel,” the letter read. They claim the conditions in the jail are infringing on Maxwell’s Sixth Amendment right to participate in her own defense.

Has the Bureau of Prisons gone overboard on the suicide-prevention details? Perhaps, but one can hardly blame them. They came under an avalanche of criticism for sloppiness or worse when Jeffrey Epstein died in their custody — especially after video cameras apparently malfunctioned and Epstein’s cell looked like a laundry room of sheets just a couple of weeks after a reported suicide attempt. Two of the guards got charged with falsifying watch records, but ever since, rumors of conspiracies and murder have dogged that case.

So the last thing BoP needs is Maxwell turning up dead too, which is why they have her under special confinement. Putting her in the general population is just asking for trouble; that would be true of any celebrity detainee, and Maxwell’s notorious past and the specific allegations in her case likely puts her at heightened risk. It’s not as if Maxwell has heightened survival skills in jail settings, either.

In fact, with that in mind, it’s tough to take this request too literally. Her attorneys likely want to negotiate better conditions while still keeping Maxwell in protective custody, unless she really does have a death wish. If so, she must not be taking this claim of groundbreaking new evidence from her attorneys too seriously:

Attorneys for Ghislaine Maxwell, the alleged accomplice of accused sex trafficker Jeffrey Epstein, said in a court filing Monday that they’ve learned of “critical new information” that impacts her criminal case and a civil case where dozens of documents are expected to be unsealed.

Her attorneys have asked that the documents, including depositions, remain sealed for three weeks as they work with prosecutors to see if they can share information with the court.

The filing did not provide details about the new information, saying that Maxwell’s attorneys aren’t at liberty to disclose it because it’s subject to a court protective order in the criminal case.

Maxwell’s attorneys initiated conversations with the US Attorney’s Office for the Southern District of New York over the weekend with the intention of modifying the protective order so they could share the information, possibly under seal, to argue to stop the release of documents.

Whatever is in those earlier depositions must be very bad. Maxwell’s attorneys got the appellate court to stay an order from the district court to unseal those records, but that may not last long. They’re almost certainly fighting a losing battle, but they lost the PR war long ago anyway. Who needs the depositions when everyone heard from Epstein’s victims in the Netflix documentary?

The Mob Is Already Targeting Mitch McConnell, and He Doesn’t Care