House trading: Compromise near on Phase A of Phase 4? 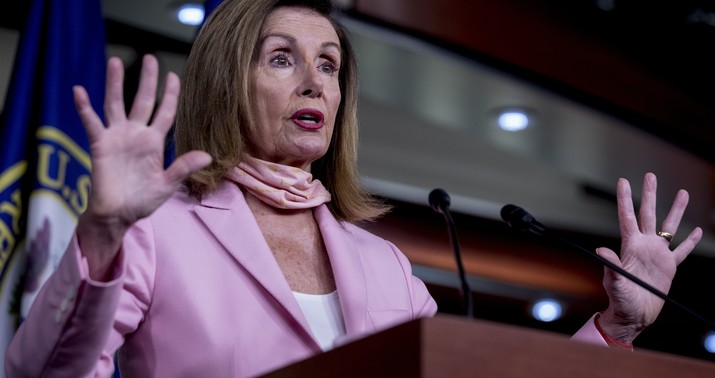 Call it an appetizer to the $3.4 trillion banquet House Democrats have demanded for weeks. The Washington Post reported last night that all sides have finally agreed to focus on the most urgent aspects of COVID-19 relief, putting aside larger issues for the moment. The emergency relief would address unemployment benefits and extend eviction moratoriums as states struggle to reopen for business.

The White House tried making this offer last week, but to no avail. What changed? Perhaps the election schedule had something to do with it:

Senior White House officials said Tuesday that they made “very concrete offers” to Democrats related to unemployment benefits and eviction protections, and after days of bickering, both sides now appear to be trying to secure a compromise.

The four have been meeting almost daily for a week. Their agreement Tuesday on a specific timeline to reach an overall deal constituted the most concrete progress yet. It suggests that the White House has backed off efforts to pass a stand-alone extension of unemployment benefits — and will also stand down, at least for now, on more recent threats to act unilaterally through executive orders if no deal can be reached with Congress.

Yesterday, I predicted that Trump’s claims of unilateral action were intended to move Democrats off their positions. That might have something to do with the sudden interest in splitting off the evictions/unemployment debate, but it might be more of a case of Augustitis. Senate Republicans started demanding yesterday that the recess be curtailed or canceled if Phase 4 hadn’t yet passed, and that might have had Democrats worried about campaigning in the run-up to the election:

The talks came as Senate Republicans on Tuesday began to emphasize that they will need to stay in Washington until a fresh round of pandemic relief aid is enacted, worried about facing the wrath of voters if they go home without one as deaths from the novel coronavirus are rising and the economic recovery has stalled. …

The Senate had been scheduled to adjourn for its August recess starting next week, but that is not looking feasible.

Who wants to go home and explain why two sides that aren’t actually disagreeing on unemployment benefits and eviction moratoria can’t actually pass either?

By the way, this progress might have been facilitated by a Mitch McConnell concession yesterday:

Senate Majority Leader Mitch McConnell said on Tuesday that he could support an extension of the now-lapsed $600 federal unemployment insurance boost — if President Donald Trump ends up backing it.

At his weekly Senate Republican leadership press conference, McConnell was asked about Speaker Nancy Pelosi’s appearing to draw a red line on the weekly federal supplement and whether he could support a negotiated spending package containing it.

“Wherever this thing settles between the president of the United States and his team, who has to sign it into law, and the Democrat, not insignificant minority in the Senate and majority in the House, is something I’m prepared to support,” McConnell told reporters. “Even if I have some problems with certain parts of it.”

If that looks like a cave, it’s only because you’re paying attention. Republicans wanted this provision fixed since it first got passed, arguing that the $600 was excessive and acting as a disincentive for returning to work. Steny Hoyer actually signaled late last month that House Democrats were willing to negotiate a new level of weekly subsidy. And yet, now McConnell has all but thrown in the towel on it.

When it comes to imaginary money, it really doesn’t matter how much you spend of it. The real fight this time isn’t the unemployment bonus anyway; it’s liability protections and block-granted state aid. That fight can take more time, but the stimulus aimed at voters is needed right now. Not just economically either, although that’s certainly true enough. It’s needed politically, before Congress’ incumbents go back home to face the voters.