Hmm: Did a Google glitch expose a blacklist of conservative sites? 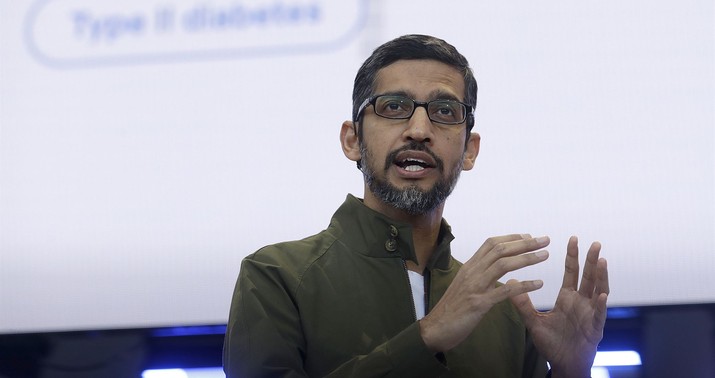 If so, that would be quite a coincidence. Last week, a cryptocurrency-scam hack on Twitter inadvertently exposed the capability for “shadowbanning,” a practice that the platform insists it does not have or use. Yesterday, a short-lived problem on Google’s core search function blocked results from a number of conservative websites — and that was no accident, a former Google engineer told Mediaite:

“It appears to have revealed the existence of another blacklist that disproportionately targets conservatives,” Mike Wacker theorized in a message to Mediaite. “The glitch is that sites on this blacklist disappeared from Google search results, but the existence of the list is very much by design. And that raises a major question: Why was this blacklist created in the first place, and what else is it used for?”

The issue was evident only briefly on Tuesday morning and early afternoon before it was resolved. However, it was long enough for users to note that they were unable to access websites including Breitbart, The National Pulse, The Drudge Report, Newsbusters, The Bongino Report, and Human Events. At least one left-leaning website, Occupy Democrats, was also affected. Legacy media outlets — including The New York Times and Washington Post — did not appear to be harmed.

Dr. Robert Epstein, a researcher who has argued Google has the power to sway up to 10 percent of American voters in the 2020 election, concurred with Wacker. “It’s likely that a person or algorithm at Google added ‘breitbart.com’ and other URLs to one or more of the company’s blacklists,” Epstein said. “Then, perhaps after some pushback, someone pulled those URLs off the blacklists.”

The “glitch” in this case may not have been something breaking, but something working too well. Wacker explains to Mediate that it appears these sites are already being penalized in search results, but subtly enough to escape notice. Somehow, Wacker theorizes, the penalties got ramped up too high and took them out of the results entirely — and the specific nature of the websites impacted make it more likely that they’re on some sort of list invoked by the momentary change yesterday.

If true, that might put Google’s CEO in a legal pickle:

Any manual manipulation would conflict with testimony Google CEO Sundar Pichai delivered to Congress in December 2018, when he told a House committee the company did not “manually intervene on any search result.”

Coincidentally or not, last week’s hack suggested that Twitter CEO Jack Dorsey might have the same legal liability. Both told Congress that they do not restrict access or impose censorship based on political views. If evidence emerges of interventions on that basis, they could face investigations of lying to Congress, which carries the same penalties as perjury in federal court.

At the very least, it might convince a Senate committee or two to begin new investigations into social media platforms. Those might get accompanied by the kinds of subpoenas that will settle these questions once and for all. And one has to wonder whether these incidents are coincidences at all, or are part of a campaign to expose manipulations by social-media platforms.