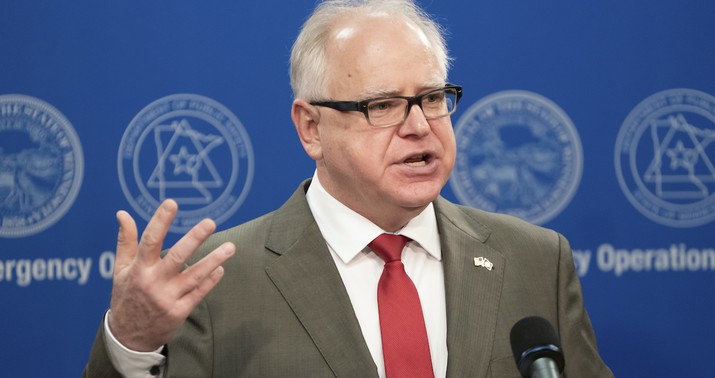 You break it, you bought it. Over 1500 buildings in the Twin Cities got damaged and destroyed in the riots that broke out after the killing of George Floyd in Minneapolis, which no one disputes is a disaster. Governor Tim Walz tried to get Donald Trump to declare it a federal disaster, however, which would have qualified Minnesota to receive federal funds for rebuilding.

Walz asked for $15 million on $500 million of estimated damages:

The state has estimated total damages at more than $500 million, and Walz specifically wrote in his July 2 letter that $15 million in cleanup and repair costs could be eligible for federal reimbursement.

“The governor is disappointed that the federal government declined his request for financial support … to help Minnesota rebuild after civil unrest damaged public infrastructure and caused extensive fire damage in the wake of George Floyd’s death,” spokesman Teddy Tschann said in a statement.

“As we navigate one of the most difficult periods in our state’s history, we look for support from our federal government to help us through,” he said.

The Federal Emergency Management Agency (FEMA) on Friday denied Gov. Tim Walz’s request for nearly $16 million in aid to help rebuild and repair structures in Minneapolis and St. Paul, many of them left in ruins by the riots and fires that erupted during protests of Floyd’s May 25 death while in Minneapolis police custody.

On July 2, Walz had asked President Donald Trump to declare a “major disaster” for the state of Minnesota. More than 1,500 buildings were damaged by fires, looting and vandalism, racking up more than $500 million in damages, according to Walz. The $16 million would have been used to reimburse local governments for debris clearing, repair and rebuilding costs.

In a prepared statement, FEMA said Saturday that after “a thorough review,” the agency determined “that the impact to public infrastructure is within the capabilities of the local and state governments to recover from.”

That may be putting it too nicely. The real issue here is that the state itself created the disaster. This wasn’t a tornado or an earthquake, a force majeur situation beyond anyone’s control. The riots took place because the city and the state refused to take control of the situation, waiting days before deploying the National Guard in any effective manner. It was a failure of leadership to act, not some sort of disaster outside of their authority to prevent.

Besides, it takes some chutzpah from Walz to even make the request. Minnesota and Minneapolis touched off riots around the country over the horrendous killing of Floyd, causing hundreds of millions of dollars in damages in those places, too. Now they want those states to fund the rebuilding of Minneapolis? Trump shouldn’t be the only one telling Walz to pound sand.

Will this create some hardship for Minnesotans? Certainly, but the other states didn’t elect Walz and Jacob Frey to their leadership positions — we did. Elections have consequences, and Minnesotans are about to suffer for their absurd leadership choices. Perhaps they’ll learn a lesson from them that way, but I’m not hopeful of that outcome.

On the other hand, perhaps there’s some reason for optimism. The demand to defund the police is about to have some consequences of its own:

At the same time, the department is facing staffing pressures. Since June, 35 officers have retired or been terminated and dozens more may soon be temporarily sidelined on medical furloughs. Officials worry the resulting shortages could affect the department’s ability to adequately police the city amid rising crime. …

With the recent departures, the number of MPD officers has fallen to about 825 — out of an authorized strength of 888 — which includes a class of 31 rookie officers who just hit the streets. But with the COVID-19 pandemic stretching the city’s financial reserves, the MPD and other city departments face difficult choices.

MPD insiders say this will likely involve scaling back or disbanding the procedural justice and community engagement units, as well as the PAL program — which runs youth sports teams across the city — in order to preserve a more essential function: responding to 911 calls. If those units do fold, most of those officers would likely go back to patrolling the streets, joining school resource officers, who returned to working out of a squad car after the department lost its contract to work in city schools.

Crime is rising, the number of officers is falling, and resources are threatened to be cut even further. That means that police have to focus more on emergency responses rather than community policing, which is precisely the wrong approach in rebuilding trust in the city. The activists are making policing even more reactive than it was before, and much less responsive. Those too are the consequences of electing a bunch of pusillanimous progressives who refuse to own up to their blame in not managing the police force more wisely. The lessons will only get harder from here, too.