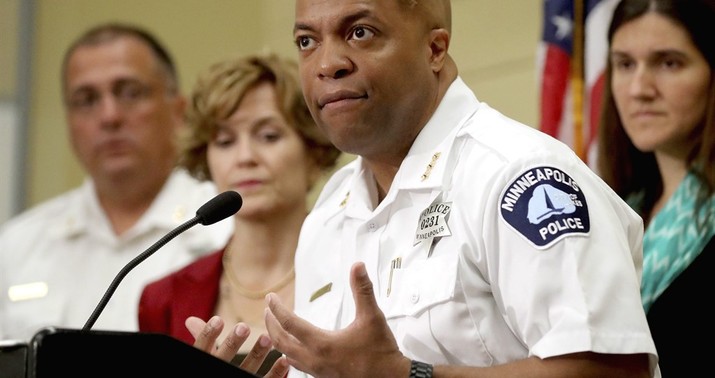 If you think that dismantling an urban police department and replacing it with social workers is nuts, you’re in good company. The very people that the Minneapolis city council claimed to be serving in its attempt to eliminate its own police department have begun blasting the idea as “absurd” and “ridiculous.” African-American leaders within the city are accusing the council of rushing to a conclusion without engaging them — and offering a proposal that will leave them unprotected from violence in the future:

These are a handful of the words that some local African American leaders are using to rebuke the Minneapolis City Council’s moves toward dismantling the Police Department, even as they demand an overhaul of law enforcement.

While the movement to defund the police has been driven by Black activists, others say that city politicians rushed the process and failed to include a police chief who has the backing of many Black residents.

“They have shown a complete disregard for the voices and perspectives of many members of the African American community,” said Nekima Levy Armstrong, a civil rights attorney and former president of the Minneapolis chapter of the NAACP. “We have not been consulted as the city makes its decisions, even though our community is the one most heavily impacted by both police violence and community violence.”

In fact, the activists allege, the city council has basically targeted a black man for unemployment. This makes the need to pass the popcorn even more urgent:

The measure doesn’t preclude a chief with a traditional policing background, but it requires the head of the new agency to have “non-law enforcement experience in community safety services, including but not limited to public health and/or restorative justice approaches.” Arradondo joined the department as a patrol officer in 1989 in his early twenties.

“Why now, when you have an African American chief who is highly regarded and trusted in the Black community?” said Steven Belton, president and CEO of the Urban League Twin Cities. “This strikes me as being passive-aggressive Minnesota Nice on steroids. This is a hit on Chief Arradondo.”

Did the city council even bother to engage with the NAACP or the Urban League on this issue before jumping onto the #DefundthePolice bandwagon? They are both claiming not to have been consulted at all, which is mind-bendingly stupid if true. It’s not as if those are particularly obscure organizations in the black community, after all; they have been an integral and leading part of it for decades, including here in the Twin Cities. The subtext of this complaint from these organizations isn’t hard to catch — they’re accusing the city council of “passive-aggressive” racism.

This is almost a picture-perfect example of the frustration that African-Americans have had with progressives and Democrats. Republicans ignore them, but their putative allies take them for granted and condescendingly dictate solutions for their problems without getting their input. Defunding and dismantling police departments is the reductio ad absurdum of that phenomenon. As these leaders argue, wealthy residents will pay for their own security, leaving the black community to twist in the wind. Violence has already begun to spike in those neighborhoods thanks to a retreat by police in the aftermath of the riots.

The people who live there don’t want to live in a city without police. They just want a police department who works with them to provide security and enforce the law in an even-handed manner. The city council has the ultimate responsibility for those policies, and their attempt to dismantle policing is nothing more than a capitulation rather than a healthy or even sane innovation.

Don’t expect this to go very far, however. This sharp criticism might push the city council to rethink its proposal, but it will certainly impact the Charter Commission. That panel has to approve any referendum dealing with the city charter, and they already have expressed skepticism about the idea of expediting a review to make the deadline for the November election:

With 15 volunteer members appointed by a Hennepin County district judge, the Minneapolis Charter Commission plays a crucial role in determining whether the city can change its constitution, which requires minimum staffing for police based on the city’s population.

In the coming weeks, many will be watching to see whether the commission uses its procedures to prevent the City Council’s proposal from fast-tracking its way onto the November ballot. It did that two years ago, when the council tried to increase its oversight of the department.

A public meeting Wednesday provided the first hints as to what the commissioners might do, with a tight deadline looming.

“I’m not as concerned about meeting the council’s timeline as I am about getting this right,” said Commissioner Matt Perry. He added: “If that pushes the timeline out, so be it.”

With the local chapters of the NAACP and Urban League blasting the proposal as “egregious” and “crazy,” just how much enthusiasm does anyone expect the charter commission to exhibit for this insane idea? Not only will it likely not make the ballot in November, it might die a quiet and well-deserved death … if the city council is lucky.