Pompeo: It’s sad that Bolton chose to end his career as a lying traitor, or something 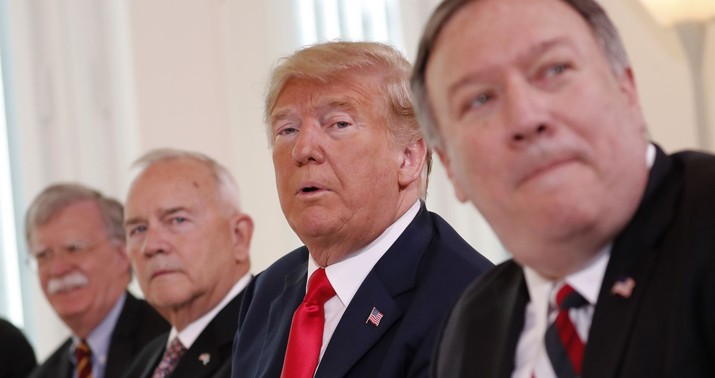 Sadness abounds in this story, perhaps even more than Mike Pompeo recognizes. The publication of John Bolton’s memoirs has the White House furious from Donald Trump on down, so much so that at times it seems they’re determined not just to rebut Bolton’s claims but almost promote them. And, at the same time, Bolton’s stories — while salacious — end up saying less than either side credits.

At any rate, there’s no doubt that Pompeo’s fully on board with Operation Bolton. Not only did Pompeo issue an official State Department press release calling Bolton a “traitor,” he tweeted it out along with the definition of traitor. The State Department pushed it out to media on e-mail again this morning, too:

Secretary of State Mike Pompeo on Thursday accused former national security adviser John Bolton of being a “traitor” in a forceful rebuke of Bolton’s new book.

“I’ve not read the book, but from the excerpts I’ve seen published, John Bolton is spreading a number of lies, fully-spun half-truths, and outright falsehoods,” Pompeo said in a statement. “It is both sad and dangerous that John Bolton’s final public role is that of a traitor who damaged America by violating his sacred trust with its people.”

“To our friends around the world: you know that President Trump’s America is a force for good in the world,” he continued.

I think we get the picture, Secretary Pompeo. It’s still hyperbole, perhaps even reckless hyperbole, to call a political opponent or former ally a “traitor” for criticizing the president, even if the criticism is dishonestly based. Pompeo understands how freighted the word “traitor” is in a political context, or at least he should.

That’s not to say that Bolton’s faultless in this. For many decades, tradition held that former admin officials kept quiet (in book form, anyway) about the presidents they served until after their terms ended. That started fraying during the George W. Bush administration, but that tradition has all but disappeared in the Trump era. The timing of this book makes it look less-than-honorable, too, coming right before Trump’s re-election bid.

However, for that Trump himself is largely to blame. That old tradition also included reciprocity, with presidents holding their tongues when appointees left. Publicly, they received praise — sometimes faint — but nothing else. Trump, however, likes to publicly shred his appointees even sometimes while they still work for him. (Right, Jeff Sessions?) Trump tore into Bolton almost as soon as the White House canceled his access card, and has publicly ridiculed him repeatedly since. Bolton’s book is nothing more than a strategic rebuttal calculated to inflict more damage than Trump is dishing out. In this environment, James Mattis’ adherence to tradition is all the more remarkable.

For that reason, though, it’s tough to take Bolton all that seriously in this media tour. He’s not known for dishonesty, but his perspective is clearly impacted by his personal feud with Trump. If Bolton really had the goods on Trump, he would have testified to Congress about it rather than play along with the White House on the appropriateness of subpoenas. That remains enough of a sore spot with the Left that it’s hampering Bolton’s effectiveness on this media tour as well. That sin might never be forgiven, especially since the Left detests Bolton almost as much as they do Trump.

For that reason, don’t expect Bolton’s commercial testimony to have much impact. To reverse the classic line from The Godfather, it’s not business, sonny — it’s personal.  That includes Pompeo now, whose diplomatic skills seem to have taken a break here. Politically, the generally tough line Trump actually took on China, Russia, and Iran — the latter definitely in the direction Bolton desired most — is what matters in the end. That’s the saddest part of all … the potential all of these men had to work together longer and accomplish key foreign-policy goals.

Exclusive: Portland Cops Are Getting the Hell Out of Antifastan and Retiring in Record Numbers